"I feel horrible when we get complaints from people that we don’t care and that we’re doing a horrific job. But I don’t believe we do a horrible job. I think we do the very best we can under the circumstances," said Mayor Karen Sorensen of Banff's snow and ice removal
0
Jan 21, 2020 11:49 AM By: Cathy Ellis 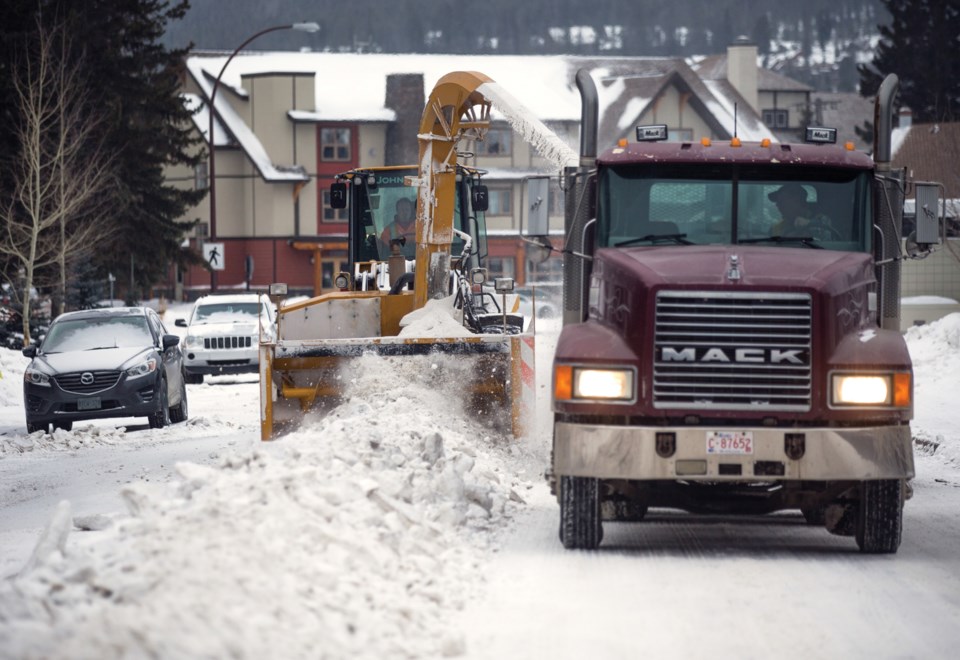 The Town of Banff clears side streets of accumulated snowfall in March 2018. RMO FILE PHOTO

BANFF – A proposal to increase snow and ice clearing at downtown intersections and crosswalks in Banff to create safer walking conditions for residents and visitors has slipped away.

In December, administration proposed hiring four seasonal employees to clear snow and ice to the pavement at 23 intersections and four crosswalks in the downtown core and surrounding area, but on a close 3-2 vote at the Jan. 16 budget meeting, council couldn’t get behind it.

“I think our teams do a tremendous job within the budget they are currently given, but I also think the community is asking for more in this area,” he said.

“We see that certainly this year, and I think we’ve seen that in the past, particularly around walkability. I think that’s very much an issue for a lot of the people.”

A major four-day snowstorm that began on Dec. 20, 2019, dumped heavy snow throughout the Bow Valley and Kananaskis Country, leaving roads, intersections and sidewalks slippery and dangerous.

According to Environment and Climate Change Canada, 55-79 cms fell in the Lake Louise region at the height of the storm, while the Banff townsite and Canmore saw similar amounts of snowfall – 40-64 cms and 40-66 cms respectively.

Mayor Karen Sorensen said there were many letters of concern and complaints about snow and ice clearing following the snowstorm, but noted she couldn’t support the increased spending on four seasonal positions at this point.

“Obviously, it’s a pretty emotional time to be making this decision because of the weather and the situation we’ve had in town for the past few weeks,” she said, noting this is not a challenge unique to Banff.

“It is the climate we live in and I feel horrible when we get complaints from people that we don’t care and that we’re doing a horrific job. But I don’t believe we do a horrible job. I think we do the very best we can under the circumstances.”

Coun. Peter Poole didn’t support the move either, noting that people should take some responsibility for walking safely by wearing cleats or carrying hiking poles, rather than relying on the municipality entirely.

“In fact, an unintended downside to something like this is that we send out a message that snow clearing is so good in this community that you can always walk wherever you want without having to be prepared,” he said.

“You could walk with patent leather shoes that don’t have grips on them because it should all be cleared for us, and then people would be slipping and ending up with broken hips and broken wrists all the time.”

Coun. Chip Olver, who was absent from the Jan. 16 budget meeting, has long pushed for better snow and ice clearing for safety reasons, as well as to encourage more people to walk in winter.

“This initiative will support winter walking because intersections will be safer to cross,” she said in her statement read by Mayor Sorensen.

“Intersections can be so icy that those who are concerned about their footing will often decide to drive rather than try to walk across the street with such unsure footing.”

Coun. Corrie DiManno voiced strong support for the increased snow and ice clearing, pointing to council’s strategic plan, which strives for the highest levels of active transportation in Canada.

“We have these very aspirational goals of seeing a rise in active modes of transportation, and for me when we see something like this, this is a perfect way of putting our money where our mouth is,” she said.

“You have to say enough is enough,” he said. “We could be clearing every single street down to the pavement. You’ve got to draw the line somewhere.”