“The draft proposal does indeed advocate a gondola just to Norquay’s base ... but that is all I can say at this point as our submission is still in draft form.”
Jul 9, 2020 6:19 AM By: Cathy Ellis 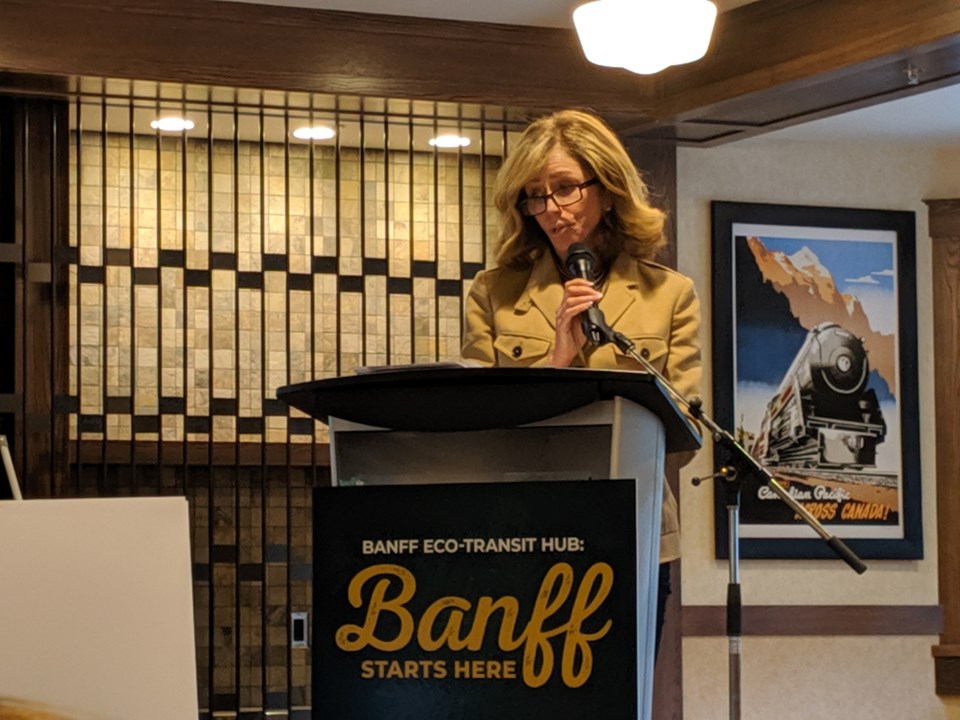 Jan Waterous, pictured here, has not given up on her and husband Adam's vision for a gondola from the Banff townsite to Mount Norquay. RMO FILE PHOTO

BANFF – The owners of Mount Norquay are testing the waters with Parks Canada to see if their second pitch for an aerial gondola between the Banff townsite and ski hill might fly.

Jan and Adam Waterous’ first proposal included a gondola to the summit of Mount Norquay, along with a two-storey pavilion and ridge top boardwalks outside the ski hill’s lease.

That proposal was vetoed by Parks Canada last December, and while the Waterous’ say they haven’t formally submitted anything yet, they’re pursuing the idea of the gondola to the base of the resort instead of the summit.

“We have given Parks a ‘draft proposal’ of what we are thinking about so that we can hopefully get some guidance prior to making our final submission,” said Jan, a managing partner in her and Adam’s personal financial holding company Liricon Capital.

“The draft proposal does indeed advocate a gondola just to Norquay’s base ... but that is all I can say at this point as our submission is still in draft form.”

In 2018, Liricon submitted a proposal for 4.4-km gondola from the Banff townsite to the summit of Mount Norquay, along with ridge top boardwalks and a two-storey summit pavilion providing food service, educational displays and viewing area.

In refusing this portion of the project, Parks Canada indicated these components of Norquay’s feasibility study didn’t conform with Parks Canada’s policies on limits to commercial development and ski area management in Banff National Park.

They said there would be no further consideration of this part of the proposal, to be located on lands outside Mount Norquay’s leasehold, including in areas declared in legislation as wilderness.

“Prior to doing so, they have tabled conceptual information for discussion,” he said. “To date, these discussions have focused on Parks Canada’s processes, policies and considerations for large scale land use proposals.”

According to documents obtained by the Outlook under federal Access to Information and Privacy  (ATIP) legislation, Parks Canada had challenges with Norquay’s former development proposal from the get-go.

Parks Canada’s ski area management guidelines do not contemplate ski areas becoming primarily summer operations, nor do they allow for growth beyond caps established in their approved site guidelines, or for development outside the leasehold.

And, with at least half the length of the gondola on land outside the ski area lease and licence of occupation, Parks Canada feared an extension of that could be viewed as defacto expansion of the ski area.

In a May 2019 letter from Banff National Park superintendent Dave McDonough, the Waterous’ were informed their proposal didn’t appear to be supported by the ski hill’s lease, licence of occupation, current legislation or key Parks Canada policies and plans.

“Neither the approved site guidelines and long-range plan for Mount Norquay contemplates an increase in commercial development of this type, scope and scale,” he said. “Nor do they allow for a shift in the primary purpose of the resort from a winter ski area to a major, year-round sightseeing attraction.”

“Limiting commercial development has been a central test of Parks Canada’s land management approach in the mountain national parks for the past 25 years,” he said, noting a development of this scale has not been approved in decades.

“Use of undeveloped park lands for commercial purposes, as described in the feasibility study, does not conform with this policy.”

In terms of the proposal within the townsite boundaries, Parks also sees some additional challenges, noting some of the gondola infrastructure may be in zones where commercial development is not allowed.

“The legislation limiting the amount and location of commercial development to specific zones within the townsite was brought into effect after extensive consultation,” McDonough said.

“Protection of the natural viewscapes in Banff was one of the key criteria for park inclusion in the Canadian Rocky Mountains World Heritage Site,” she stated.

“This redevelopment may be seen by some as a threat to the park’s World Heritage Site designation.”

“If this proposal is supported it will have significant implications for how Parks Canada works with other ski areas and could call into question the ski area management planning process as a whole,” read one briefing document, noting the purpose of the site guidelines and long-range plans is to establish final growth and development limits.

“Other ski area will likely wish to deviate from their approved plans and limits, if Norquay is allowed to do so,” it read.

According to the ATIP documents, about 10 per cent of the Liricon’s first gondola proposal lies within the town boundary, 15 per cent within the ski area lease and the remainder is on park land.

The Canada National Parks Act states that leases and licences may only be issued to ski areas for the "purposes of commercial ski facilities."

“It is questionable as to whether a year-round gondola could reasonably be considered a ‘ski facility,’ ” concluded one Parks Canada document.

In addition, Parks Canada raised concerns about the impacts of using scarce, undeveloped montane lands for the base parking lot and the impacts of tripling its current use.

The federal agency highlighted how it has spent millions of dollars removing facilities, restoring disturbed areas, and putting use restrictions in place since the 1990s to ensure wildlife habitat and movement corridors in this area are preserved.

“The area between the town and ski area is ecologically important and sensitive,” according to a briefing note.

Aside from the gondola and two-storey pavilion and ridge top boardwalks, Norquay’s former proposal included rebuilding the ski lodge and other buildings, and removal of about 900 parking stalls at the ski hill.

One of the proposed mitigations for the gondola included reducing traffic or decommissioning the road to Norquay, with the goal of improving wildlife movement through the critical travel corridor.

As well, the proposal involves a heritage railway village at the train station, a 1,500 parking lot on the north side of the train track on lands its leases from CP in addition to the existing intercept lot on the south side approved by the Town of Banff.

Part of the Waterous’ vision includes a car-free Banff, including the return of passenger rail between Banff and Calgary.

The Alberta government is currently working with the Canada Infrastructure Bank – a federal Crown corporation tasked with financially supporting revenue-generating infrastructure projects – to look at the feasibility of a new passenger rail service.

Canadian Pacific Railway has cautioned, however, that although willing to cooperate with the study, it won’t support a proposal to co-locate passenger rail on its property if it interferes with its business, and safety and liability issues aren’t addressed.

In terms of what’s next for Liricon, Parks Canada has indicated that components of the feasibility study that fall within the ski area’s lease and are consistent with the management plan, ski area management guidelines and the Mount Norquay site guidelines and lease “may be considered through the submission of a new or an amended long-range plan.”