Ski hill officials say the plan allows for growth and improved experiences to accommodate up to 9,000 skiers and riders a day, but also includes environmental gains like moving summer use away from grizzly bear habitat and removing about 660 hectares from the leasehold to improve wildlife connectivity
0
Sep 10, 2019 10:08 AM By: Cathy Ellis 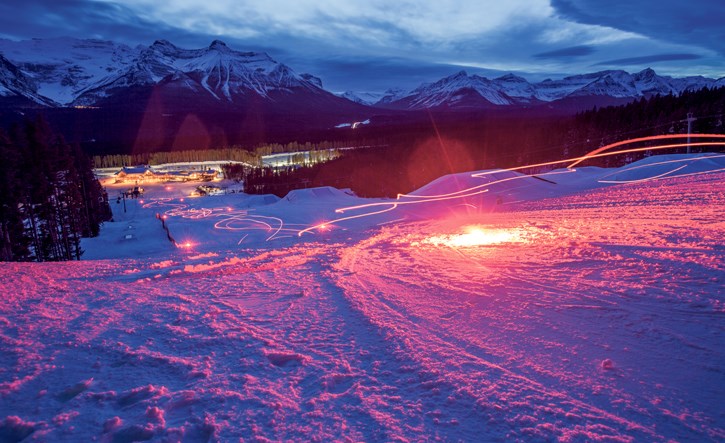 Parks Canada has approved a long-range plan for the Lake Louise Ski Resort that will guide its development over the next 15 years. RMO FILE PHOTO

LAKE LOUISE – New lodges, new ski terrain and lifts and relocation of summer use to the top of Whitehorn Mountain have been given the go-ahead for Lake Louise Ski Resort over the next five to 15 years.

Ski hill officials say the plan allows for growth and improved experiences to accommodate up to 9,000 skiers and riders a day, but also includes environmental gains like moving summer use away from grizzly bear habitat and removing about 660 hectares from the leasehold to improve wildlife connectivity.

“Everyone’s eager to get things done, but this is a five to 15-year long-range plan and there’s a reason it will take that long to do things,” said Dan Markham, Lake Louise ski resort’s director of brand and communications.

“It’s good news for everybody and something to look forward to. It’s been a long time coming, but it’s been a pretty collaborative process from our perspective. I think we’re all very pleased that it’s gotten to this stage.”

Not everyone is pleased, however.

Bow Valley Naturalists (BVN) say they remain frustrated, noting that Parks Canada continues to stick to its claim that a massive expansion of the Lake Louise ski area footprint will result in a net environmental gain, in spite of a lack of evidence to support this.

Reg Bunyan, BVN’s vice-president, said the federal agency continues to ignore input from the public, scientists and other experts who have pointed out the flaws in this argument, choosing to put commercial interests ahead of nature conservation.

“We remain particularly annoyed with Parks Canada’s simplistic ‘ecological benefit yardstick’ that measures lease hectares given up versus lease hectares added, which treats all land as ecologically equal,” he said.

“Swapping poor or difficult to develop terrain for new ski terrain primarily benefits the lessee, does not necessarily accrue any ecological benefits and may even create a net ecological loss.”

BVN acknowledged there are green elements to the plan, but Bunyan said most of these benefits will be more than offset by the greatly increased human use, increased motor vehicle traffic through wildlife corridors, a larger developed footprint, more water demands and an intrusion of the lease into declared wilderness.

“Parks Canada's legal mandate and direction from the minister has been to put ecological integrity first in all aspects of park management, and to make science-based decisions; we see no evidence of this in the approved long-range plan,” said Bunyan.

The long-range plan calls for a new mountain top day lodge and interpretive centre at Eagle Ridge as part of a plan to relocate summer use away from grizzly bear habitat lower on the mountain.

The development plans include a new day lodge next to the original Whiskey Jack Lodge at the base of the hill, expansion of Temple Lodge and a new warming hut at Top of the World.

Richardson’s Ridge would be developed, and the ski resort would be granted winter use of Hidden Bowl and West Bowl through seasonal licence of occupation agreements. Future projects for Hidden Bowl are not part of this development plan.

While no development is planned for West Bowl, the resort would start doing avalanche control work there given skiers currently access that backcountry area from the Summit lift. An egress run would be built to get skiers out.

Markham said one of the first steps is development of water reservoirs as the ski hills works on a series of measures to reduce the ski area’s dependence on water withdrawal during low-flow periods.

He said relocation of summer to higher up on the mountain to Eagle Ridge, away from prime grizzly bear range, is a big priority. A new lodge will be built there.

“That’s going to take a long time to build, but that would be one of the projects we’ll start considering,” Markham said.

“In the next five years, there’s a good chance we’ll work on the new Whiskey Jack Two Lodge, which will extend past where the current one is … and there are opportunities to update Temple, which we’ll be considering doing earlier than later.”

Parks Canada announced its approval of the long-range plan late on Friday (Aug. 6).

According to the statement, a detailed impact assessment concluded that, by implementing specific mitigation measures, there will be no significant ecological impacts from the projects and that a number of ecological gains will be had.

“With approval of the long-range plan, the Lake Louise ski area may now advance specific project proposals,” the statement read. “Individual projects will be subject to further environmental review, including opportunities for public comment on more complex projects.”