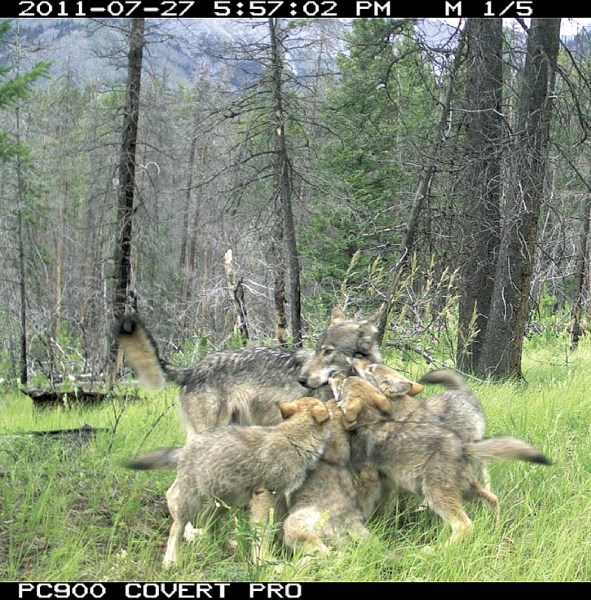 A remote camera captured this image of a wolf and her pups on the Fairholme benchlands in Banff National Park in 2011.

BANFF – Wildlife researchers are tracking the movements of a wolf pack in the Ya Ha Tinda area.

Earlier this month, two male wolves in a pack of about six to eight animals were fitted with GPS collars at the federal ranch, on the eastern slopes of the Rockies, as part of ongoing research centred on bison and elk.

Parks Canada officials say they want to see how these wolves interact with Banff’s backcountry bison, but also to understand how wolf predation affects elk movement and migration.

“We don’t know which pack this is or where they’ll roam,” he said.

“I suspect this pack will travel from Ya Ha Tinda up to the Clearwater, into the Red Deer drainage. Historically, the Red Deer pack travels through the Red Deer and Clearwater valleys, so we’re just waiting to see.”

The fate of the Red Deer pack is still unknown.

The breeding female of the pack was killed mid-January in a trap line along the Panther River, about six kilometres outside Banff National Park in Bighorn Country. It’s also confirmed the pack was eight wolves strong in mid-December.

The five-year-old breeding female wolf, which produced at least four pups last spring and was said to be healthy before her death, was fitted with a GPS collar to help with park research associated with the bison reintroduction program.

“The breeding female was neck snared in January and we don’t know whether the other wolves from that pack were killed at the same time,” Whittington said.

“At this point we can’t say for sure. We didn’t see any fresh wolf sign up the Red Deer, but wolves can travel so far so fast that they could be hiding out.”

The Red Deer pack ranged from Ya Ha Tinda to the Icefields Parkway. It spent about 80 per cent of its time inside Banff National Park.

Parks Canada plans to check data from remote cameras to get more information on this pack, as well as the park’s other packs.

“Then we’ll have a better sense of wolf pack dynamics of each pack,” said Whittington.

Historically, the Ya Ha Tinda area is one of the most important elk ranges in Alberta. In the past, wolves have roamed from Ya Ha Tinda to the Clearwater.

“These wolves could be a descendant of that pack,” Whittington said.

This pack regularly crossed paths with a solitary male bison, known as No. 18, in the Red Deer River Valley.

After the herd was released last summer into a 1,200-square-kilometre reintroduction zone – with fencing put up strategically to keep them from wandering onto the no-go zone of provincial lands – the bull took off on the rest of the herd.

“For months now, No. 18 has spent the majority of his time in the Red Deer Valley,” according to Parks Canada’s most recent bison blog.

“According to our GPS data, he has crossed paths more often with the resident wolf pack than with other

bison.”
As for the Cascade-Panther wolf pack, the last piece of information indicated there might be one remaining wolf. Over the years, numbers in that wolf pack have fluctuated between three and nine individuals.

A female wolf from the Panther-Cascade pack was trapped in early December, less than one kilometre from where the breeding female of the Red Deer pack was trapped a little over a month later.

The Panther-Cascade pack lost another female wolf when she fell off a cliff and died along the north fork of the Cascade River in early summer 2018. She had also been fitted with a tracking collar for research purposes.

“We don’t know how many wolves are left,” said Whittington. “The last we know of was tracks of a single wolf.”