“After a decade spent madly promoting ever increasing park visitation without regard to the social and ecological consequences, everyone is looking for a visitor gridlock solution,” said Reg Bunyan of Bow Valley Naturalists
0
Jan 7, 2020 5:31 PM By: Cathy Ellis 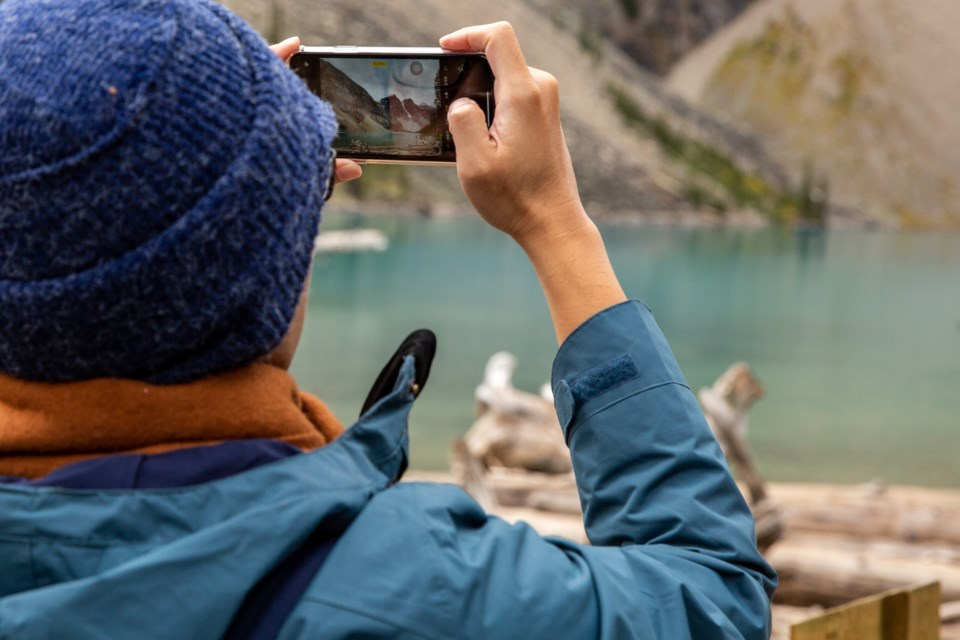 A tourist takes a picture of Moraine Lake with his mobile phone on Sept. 14, 2019. The parking lot at Moraine Lake was closed at 6 a.m. as hundreds of tourists flocked to the lake. EVAN BUHLER RMOP PHOTO
LAKE LOUISE – Visitors must now make a reservation to ride the shuttle bus to Lake Louise and Moraine Lake as Parks Canada tries to alleviate visitor frustrations over congestion and crazy lineups.

All Parks Canada shuttle fares to the two iconic Banff National Park lakes from the park-and-ride lot, located about six kilometres east of the Lake Louise hamlet on the Trans-Canada Highway, must be booked in advance, with no walk-up sales permitted.

Parks Canada officials say reserving a bus seat provides certainty for residents and visitors wanting to see Lake Louise and Moraine Lake and allows pre-trip planning so people can make the most of their time spent at the two popular destinations.

“There were days last year where we had people standing in long lineups for up to two hours waiting to catch the shuttle, which is not a good visitor experience,” said Jed Cochrane, acting visitor experience manager for Lake Louise, Yoho and Kootenay.

“What we found was the number of people that we could move in a day was not as many as people that wanted to ride shuttle. We heard loud and clear from visitors that the long lineup was the biggest problem; not the fact that they had to take a shuttle.”

Approximately 75 per cent of all bus seats for the season from mid-May to mid-October will be available on April 1. The remaining 25 per cent will be released on a rolling two-day out schedule throughout the season, equating to about 900 seats per day becoming available two days before.

In peak season, with the early morning shuttles to Moraine Lake, 3,360 people per day will have access to Lake Louise lakeshore and Moraine Lake in Parks Canada shuttles – 1,480 and 1,720 respectively.

Officials say this is up from the 2,712 seats per day available in 2019 because of the extended hours the shuttles will be running this year.

“There will be some growth, but not by a significant amount,” Cochrane said.

“It’s a function of how many people we can handle at either destination with respect to lines at bathrooms and all the other infrastructure concerns.”

The main roads to the two iconic destinations will remain open, but parking is limited to about 500 stalls at Upper Lake Louise and 150 at Moraine Lake parking lot. Both lots typically fill up by sunrise in the busy season, and when they’re full, Parks Canada turns private vehicles away.

Reservations must be made for a specific time to head to either lake; however, no booking is required for the trip back to the park-and-ride lot.

“There could be some lineups on the way down, but we don’t think it will be nearly what we saw in the summer,” Cochrane said.

Moraine Lake and Lake Louise are two of the busiest places in the national park. Parks Canada’s 2010 management plan for Banff National Park, which is currently under review, called for a two per cent increase a year in visitation.

The park now draws 4.1 million visitors each year, up from the 3.6 million in 2014-15, which was itself a record-breaking year.

The Bow Valley Naturalists has mixed feelings on this specific proposal, but vice-president Reg Bunyan said the organization continues to press Parks Canada to consider limits to growth and visitation.

“After a decade spent madly promoting ever increasing park visitation without regard to the social and ecological consequences, everyone is looking for a visitor gridlock solution,” he said.

“In the absence of a park-wide human use strategy, it feels like another Band-Aid solution.”

The conservation group is concerned that this initiative seems to be focusing only on addressing visitor experience and infrastructure issues.

From an ecological perspective, Bunyan said popular trails and viewing areas in the Lake Louise and Moraine Lake area are relatively hardened and able to handle existing levels of use.

However, he said managing a visitation bulge in Lake Louise will likely shift visitation to other areas less able to handle the impacts.

“Given the Alberta government's proposal to double tourism visits to Alberta by 2030, there is an urgent need to develop a comprehensive visitor use strategy; one that recognizes both the social and ecological limits to growth,” said Bunyan.

Banff Lake Louise Tourism has been working with Parks Canada in an effort to deal with traffic congestion in Lake Louise and implement long-term plans for sustainable transit across Banff National Park for 2020.

“We have been for a while in partnership in terms of trying to evolve how we’re managing visitation in congested areas and how we’re setting visitor expectations,” said Leslie Bruce, president and CEO of BLLT.

“We are continuing to work to get people on transit, so that is an ongoing evolution.”

Cochrane said the shuttle, which aims to get private vehicles off the road, deals not only with congestion, but also visitor safety.

“We know that significant vehicle congestion presents problems with respect to visitor safety and visitor experience,” he said.

“We want to be able to get emergency vehicles in and out, and personal vehicles out in an orderly fashion, if needed.”

Campsites, particularly on long weekend, book up quickly. In 2019, Banff National Park set a new opening day record for campground reservations. In total, 17,976 were made in a 24-hour period. The previous record of 12,934 was set in 2018.

For details on the new shuttle reservation system, go to: www.pc.gc.ca/en/pn-np/ab/banff/visit/parkbus/louise.