Lake Minnewanka Loop will be closed to vehicles Mondays through Thursdays from May 1-20 and the eastern end of Bow Valley Parkway will once again be off limits to vehicle traffic this summer.
Mar 15, 2021 4:28 PM By: Cathy Ellis 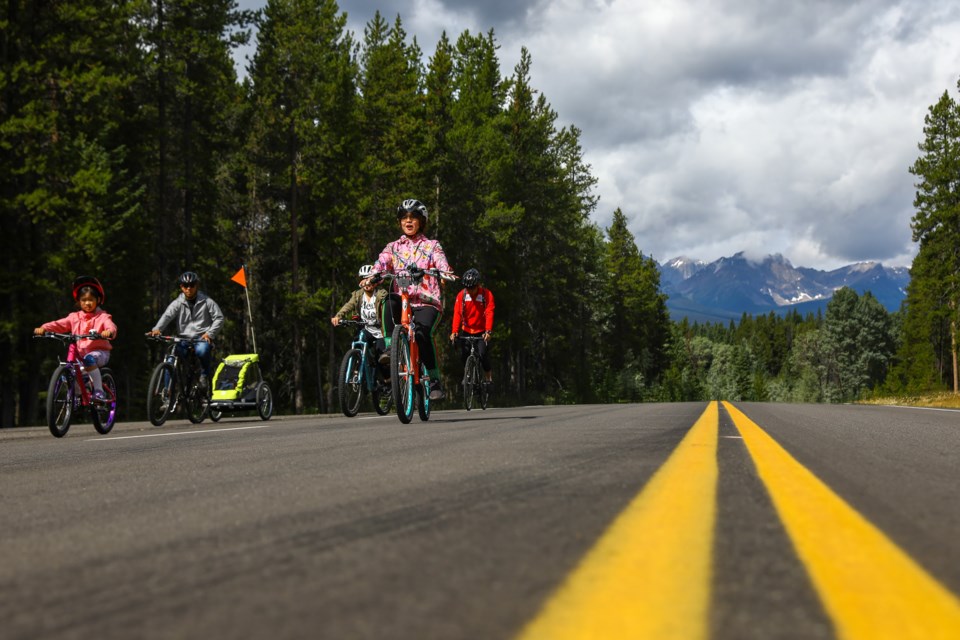 A family cycles along the Bow valley Parkway towards Johnston Canyon on Saturday (Aug. 8, 2020). The highway was closed to visitor vehicle traffic during the summer, allowing pedestrians and cyclists to take over. EVAN BUHLER RMO PHOTO

BANFF – The Minnewanka Loop will be closed to vehicles weekdays from Monday to Thursday from May 1-20 as part of pilot project to test a new cycling initiative in Banff National Park.

In addition, the Bow Valley Parkway will be closed to vehicles again this summer from its eastern end near the Fireside day-use area to Castle Junction to allow for cyclists.

“It’s about looking at the bigger picture of sustainable movement throughout the park,” said Daniella Rubeling, visitor experience manager for Banff National Park.

Elimination of vehicles along the Minnewanka Loop Mondays through Thursdays will give cyclists a chance to ride the 25-km loop without worrying about rubbernecking tourists.

Parking will be available at the Cascade Ponds day-use area or in the Banff townsite. The loop will be open to vehicle traffic Fridays through Sundays.

Rubeling said Parks Canada worked on the plan in partnership with Banff and Lake Louise Tourism and other tourism stakeholders.

“We’re testing it out and welcoming feedback on it,” she said. “What that looks like for the long-term is yet to be determined.”

The eastern end of the Bow Valley Parkway will also be closed to vehicles again this summer.

However, this year, Roam transit will access the parkway from Castle Junction to bring people to the tourist hotspot of Johnston Canyon as of May 21.

“We’re trying to build on some of the lessons we learned last year,” Rubeling said.

“While we had a lot of really great feedback from people who enjoyed the cycling experience, we also recognize that access to the popular Johnston Canyon is still of interest to people.”

To ride the Bow Valley Parkway, Parks Canada recommends cyclists park at the Fenlands parking lot or at the train station intercept lot and access the Legacy Trail connector along Vermilion Lakes over to the 1A.

“We want to avoid the challenges we saw with parking at the Fireside area, at the gate, last year,” Rubeling said.

“We want people to park in Banff and get their cycle on from there.”

Meanwhile, the parkway has seasonal travel restrictions from March 1 to June 25 to prevent any travel, including vehicles, cyclists and walkers, from 8 p.m. to 8 a.m. to give wildlife the space they need to thrive in spring at crucial times of the day and year.