A dead wolf was spotted by the side of the Trans-Canada Highway in Banff National Park in mid-June, but wasn't reported to Parks Canada until July 14, prompting an investigation.
Jul 15, 2020 3:37 PM By: Cathy Ellis 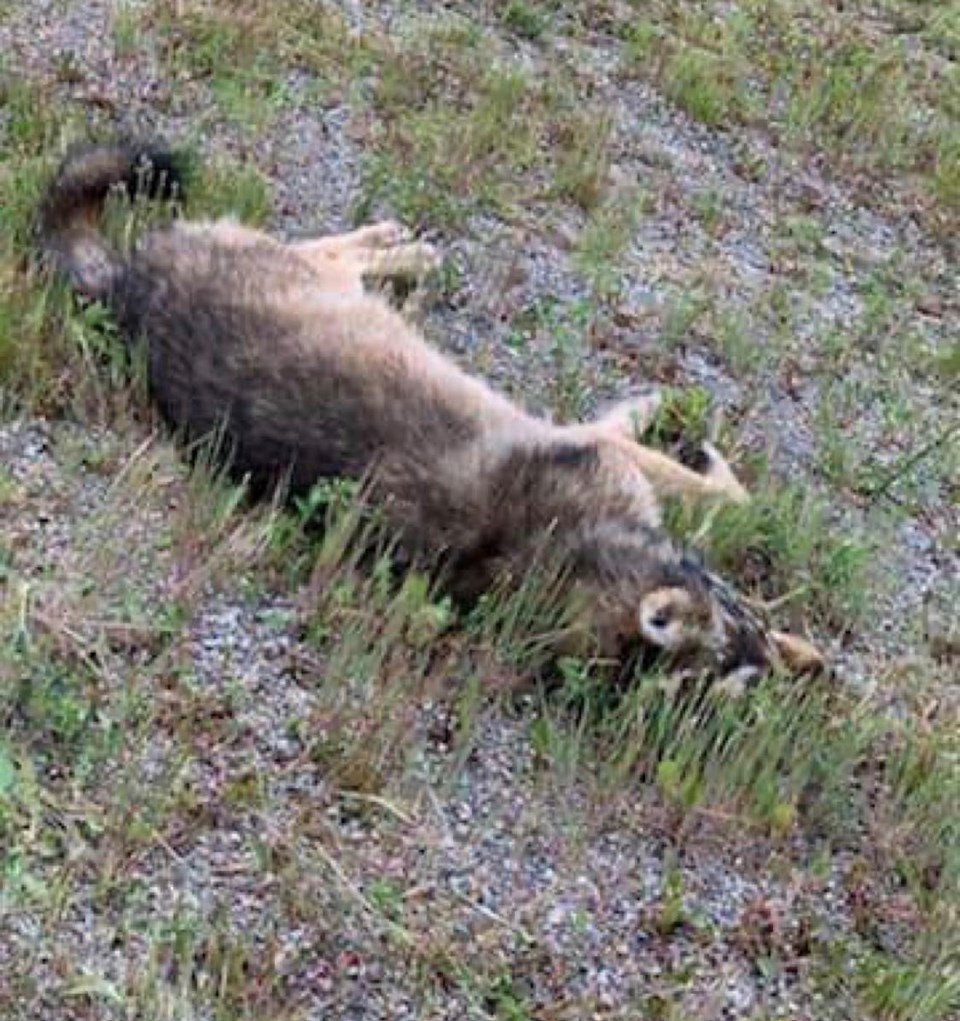 A cellphone photo of a dead wolf on the side of the Trans-Canada Highway that was sent to Parks Canada. SUBMITTED IMAGE

BANFF – Parks Canada is investigating a report of a wolf death on the Trans-Canada Highway in Banff National Park.

It is unknown at this point if the wolf is a member of the Bow Valley wolf pack, which lost the alpha male in May when it was struck and killed on the highway west of the Banff townsite.

A photo of a dead wolf was sent to Parks Canada, prompting an investigation.

“The deceased wolf was spotted by a cyclist on June 12, near Castle Junction, and reported to Parks Canada on July 14,” said Justin Brisbane, public relations and communications officer for Banff National Park in an email statement.

There is no further information at this point.

John Marriott, a prominent wolf advocate and wildlife photographer familiar with the Bow Valley pack, has seen a photo of the dead wolf and said it does look like one of the pack members.

“It is really frustrating to hear this news; it feels like wolves just don’t get a break anywhere, especially if they can’t find peace in our national parks,” he said.

Marriott said people have been expressing frustration at Parks Canada staff –  but they’re not to blame – and said it comes down to a lack of direction and funding within Parks Canada.

“At a time when Canadians are wanting to spend more and more time outdoors – even in a pandemic year,” he said.

Wolves in Banff National Park have been hit hard since the alpha male of the Bow Valley pack, known as No. 1901, was found dead on highway about 1.5 kilometres west of the Banff townsite near Third Vermilion Lake on May 20.

An old and injured non-breeding female wolf that had been hanging around the Banff townsite, and travelling east to Harvie Heights and Canmore, approaching people and vehicles with dogs, was destroyed on July 9.

Two days earlier, an emaciated young, male wolf that appeared food-conditioned and was seen entering a building, as well as observed with garbage in its mouth, was destroyed at Sunshine Village.

Parks Canada is also examining DNA evidence to determine if the wolf destroyed at Sunshine is the same one that boldly entered two tents at Egypt Lake campground and got into food and garbage there.

Marriott said he supports Parks Canada’s decision to put down the two wolves under these circumstances.

“I really don’t envy the jobs of the resource conservation officers who have to make these terrible decisions, but I think they’ve made the right call,” he said.

“Now the question becomes, how do we prevent this from continuing to happen?”

Marriott said it is a natural part of a wolf’s life cycle to disperse to look for a mate and it doesn’t always go well, adding some wolves just aren’t good hunters naturally.

“And it’s also natural for older wolves to be kicked out from their family late in life and these wolves rarely make it on their own,” he said.

“I am not sure there’s anything Parks or anyone else can do, but I am curious how these wolves keep showing up that appear to have already been habituated-food conditioned before arriving here.”

To protect wildlife in Banff National Park, Parks Canada urges people to report all wildlife sightings to Banff Dispatch at 403-762-1470.

They also remind residents and visitors to obey all posted speed limits, secure all food and garbage, never litter, never feed wildlife and give animals their space.

“Parks Canada is asking the public to do their part to help protect wolves in Banff National Park,” Brisbane said.

“Visitors and residents should remember that we share this treasured place with wildlife, and must all take the necessary steps to keep people and wildlife safe.”