Parks Canada rescued six elk that crashed through the ice on the Bow River earlier this month, but one calf succumbed to the cold waters
Nov 20, 2019 3:45 PM By: Cathy Ellis 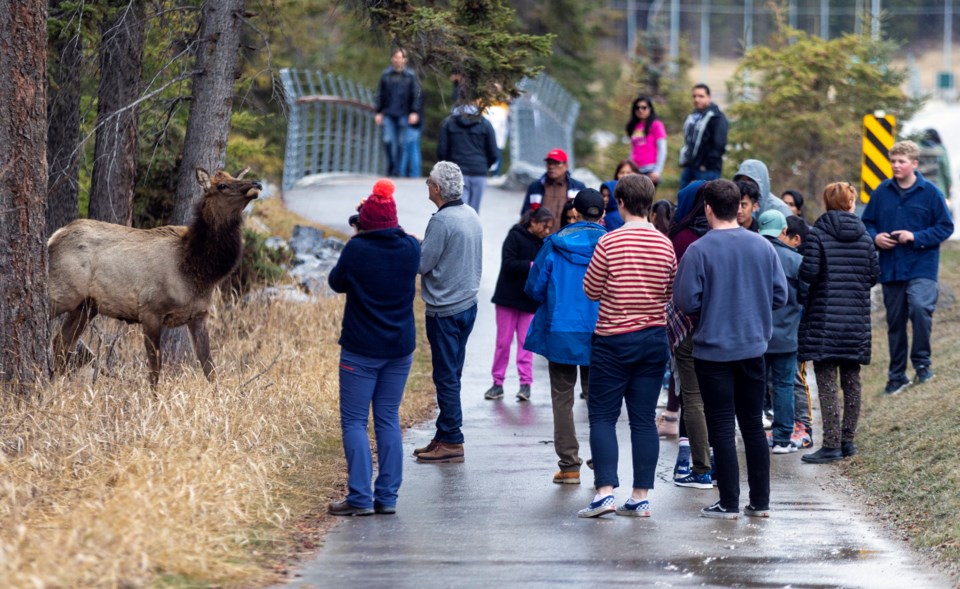 Tourists crowd in around an elk along the Mount Norquay Road in Banff. RMO FILE PHOTO
BANFF – Wildlife experts are keeping a close eye on an agitated elk herd in Banff, including one cow elk that knocked a man to the ground and several elk that fell through the ice trying to get across the Bow River.

An adult female elk attacked a man who was heading back to his hotel from the theatre at the Banff Centre around midnight on Nov. 10, while the following morning several cow elk in the herd began bluff charging guests in the area.

Parks Canada officials say several aggressive elk needed to be hazed from an area near the new parking lot at the Banff train station as well.

“It seems like in these last weeks their tolerance has been less and their response has been more aggressive,” said Bill Hunt, Parks Canada’s resource conservation manager for Banff National Park.

“It’s surprising for the interactions in the fall to involve cow elk, not bulls. Typically, we see aggressive cow activity in the spring when they’re protecting young calves and now it seems like the herd was fairly aggressive in terms of cow elk.”

In the aggressive encounter on Nov. 10, Hunt said the man came across a large herd upon leaving the theatre, but tried to back away and go around the animals.

“He tried to walk away and avoid the elk, but was approached by a female elk that proceeded to knock him down,” said Hunt. “He went to hospital with minor injuries and was discharged that same night.”

The next morning, other female elk in the herd were also bluff charging guests at the Banff Centre.

“We went and hazed the animals out of that area,” said Hunt, noting a formal warning remains in place for Tunnel Mountain trails and the area surrounding and including the Banff Centre.

Hunt said the elk that knocked the man to the ground was captured and fitted with a collar, so staff could keep tabs on it and see if its aggressive behaviour continued.

“We haven’t had any reports, or concerns since then,” said Hunt.

Meanwhile, a mother elk and her calf fell through the ice on the Bow River about 250 metres upstream from the canoe docks on Nov. 9. Four bull elk crashed through the ice near Central Park the following day.

In both instances, Parks Canada wildlife staff and public safety officials cut paths through the ice to help the elk get back to dry land.

Wildlife officials made the decision to help the elk before they drowned, particularly because they fell through the ice in areas where there are many people watching the situation unfold.

“Obviously, if it happened in the backcountry of Banff, nature would play out on the landscape,” said Hunt.

“When it’s that close to town, we always worry that people will try to intervene on their own and so it will place visitors at risk. So we step in and do our best to resolve if we can.”

Hunt said it’s difficult to speculate why elk appear more anxious than usual this time of year, but said a lack of frozen ice on the Bow River means some of their escape routes aren’t available.

“It’s anyone’s guess whether it’s the result of the rut or whether it’s because elk are not able to get back and forth across the river right now because of the ice, so they’re a little anxious as some of their escape routes are no longer viable,” he said.

“These routes and escape routes that normally work well for them to just hop across the river and get on the other side and away from people aren’t working, then I think they just become agitated.”

Hunt said that it didn’t appear the local wolf pack is any more active around town than usual, which could make the elk herd extra jittery.

“We’ve certainly had some camera sightings of the wolf pack moving through … that may be encouraging them to stay in town, but it’s hard to speculate,” he said.

There are very few instances of elk attacking people in Banff anymore.

In November 2017, four bull elk were killed that were aggressive towards people during the fall rut, including one that attacked a jogger at the Banff recreation grounds.

Earlier in the year in June, a cow elk protecting her newborn calf charged and kicked a local Banff man in the head when he inadvertently got too close.

“It’s certainly not like we had many years ago when we had all the problems when elk numbers were very high, but it certainly still happens,” said Hunt.

Staff continues to patrol daily to look for elk within the townsite, but Hunt said Parks Canada also relies on members of the public to make reports.

“With quite a bit of rigour, staff will respond and we have pre-determined routes out of town that we’ll try to push those animals to try to get them back into the wildlife corridors,” he said.