“There were lots of questions early on this summer about how much visitation we’re going to have, and I think it’s interesting just to see this return to numbers that are maybe not comparable, but at least approaching previous years.”
Jun 26, 2020 11:00 AM By: Cathy Ellis 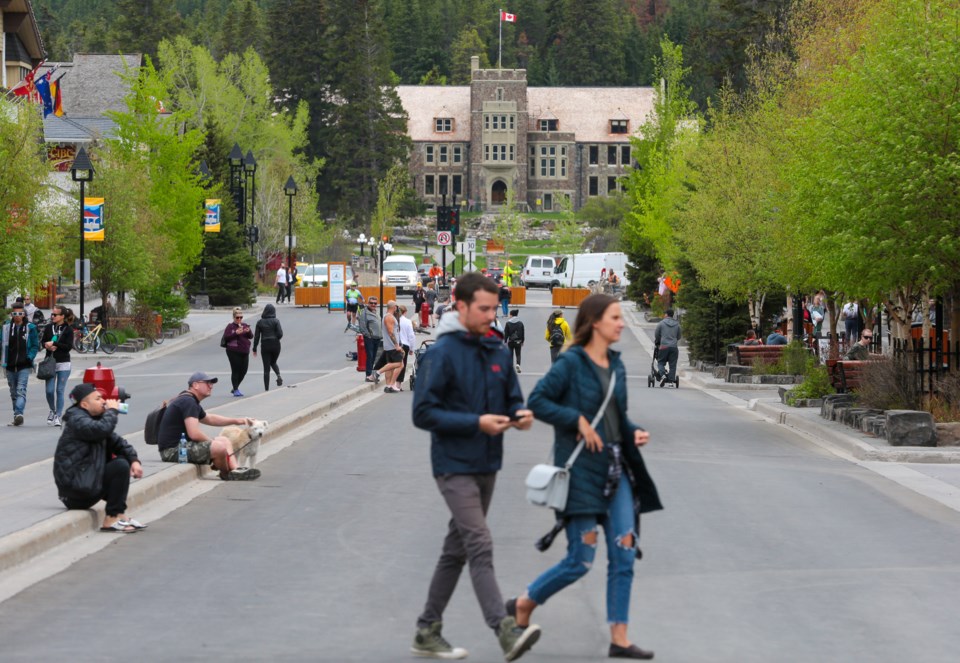 Pedestrians walk down the middle of Banff Avenue where the 100 and 200 blocks are closed to vehicles to help people maintain social-distancing. EVAN BUHLER RMO PHOTO⁠

BANFF – Visitation to the tourist town is slowly beginning to climb as Banff swings into summer.

Last weekend (June 20-21), many regional visitors flocked to Banff and there are predictions the coming summer weeks, including next week with Canada Day on Wednesday (July 1), will bring even more tourists.

“There were lots of questions early on this summer about how much visitation we’re going to have, and I think it’s interesting just to see this return to numbers that are maybe not comparable, but at least approaching previous years.”

According to a recent report to council, anticipated two-way vehicle per day volumes in June and September were between 11,000 and 15,000, whereas those numbers climb to between 20,000 and 25,000 for the months and July and August.

Administration believes congestion will likely happen on busier summer days, noting  the closure of the 100 and 200 blocks of Banff Avenue diverts traffic to adjacent streets, notably Lynx Street and Beaver Street, and to a lesser extent Muskrat and Otter streets.

The Town is using a number of tactics to address congestion, including reprogramming traffic signals at either end of the downtown pedestrian zone to expedite turning. Flaggers are also employed during peak periods to direct traffic in key areas, including along Norquay Road and Banff Avenue, to divert vehicles to the train station and Fenlands parking lots, which have a combined capacity of over 700 vehicles.

With respect to traffic management so far, Enns said recent traffic volumes have not led to traffic congestion.

He said flaggers were deployed at key intersections last weekend, primarily to manage vehicles coming into town in the morning and then later in the afternoon at places such as the corner of Beaver and Buffalo streets and Buffalo and Lynx streets.

“We’re starting to be strategic with our flagging budget and predict that we will need more flaggers as vehicle volumes become busier, and so we held back on some of our spending to date on that,” Enns said. "The approved budget is $50,000.

Enns said flaggers tend to be effective at the post office intersection, however if vehicle volumes continue to increase, a three-way stop might help at the Beaver-Buffalo intersection.

“This is an option we are holding back on,” he said.

With the provincial government’s recent move to stage 2 of the relaunch of Alberta’s economy, more and more businesses are open in Banff, including retailers and restaurants.

Banff typically attracts more than four million visitors annually, including U.S. and other international visitors, but with most tourists currently regional day-trippers, hotels are still having a hard time.

It was not uncommon to see 95 per cent occupancy in recent years before the COVID-19 pandemic hit.

“This is not expected to change a great deal until restrictions concerning non-discretionary inter-provincial and international travel, including the U.S., are eased, or lifted entirely,” he said.