Applications for Santa’s Anonymous are available on the Town of Banff’s website, open until Nov. 29 – financial donations are accepted at the Banff Town Halls’ front desk, as well the community is invited to the Santa’s Anonymous Auction and Dance on Dec. 7 from 6 p.m. to 11 p.m. at the Banff Legion
0
Dec 2, 2019 9:00 AM By: Alana MacLeod 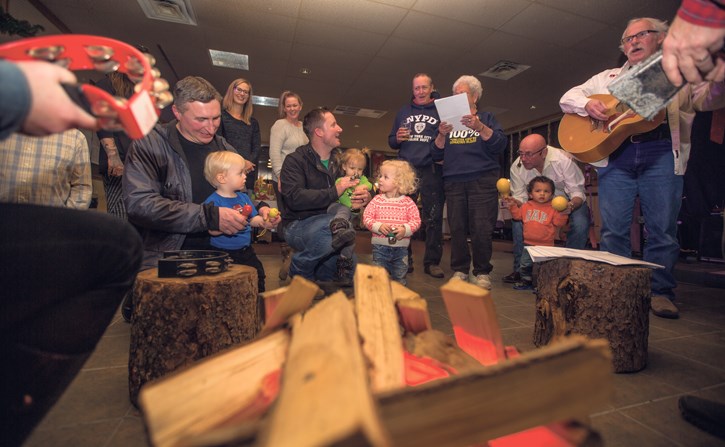 Children and adults alike take part in the annual singing of Christmas Carols at the Banff Legion as part of the fundraising efforts for Santa's Anonymous in 2016. RMO FILE PHOTO

BANFF-LAKE LOUISE – Banff and Lake Louise’s popular holiday fundraiser, Santa’s Anonymous, is back for another season of giving.

While the organization is sad to announce its usual Giving Tree event won’t be running this year, the volunteer-based initiative is proud to run for its 35th year in the Bow Valley, ensuring all within the community are able to celebrate the season.

“Santa's Anonymous is a volunteer, community-based initiative dedicated to the relief of Banff and Lake Louise community members in financial need during the holiday season,” said Alison Milroy, an organizer for Santa’s Anonymous.

The change hasn’t stopped the initiative from moving forward, however, with Milroy saying it’s been “wholly supported by residents, businesses and community organizations in Banff and Lake Louise since 1984.”

“The communities' desire to give and care for those in need is truly heart warming,” she said.

In terms of why its important, Milroy said Santa’s Anonymous aims to ensure all in Banff and Lake Louise feel some relief this holiday season.

“Our communities are not immune to financial challenges with food security, health costs and housing. Food costs rise year after year, which is costly for all, but devastating for vulnerable groups: families, seniors on fixed incomes and individuals with health challenges all struggle with rising costs,” she said.

“There is an identified need in our communities and often it is amplified during the holiday season when financial stress is exacerbated. For the past 35 years, it is the generous and caring support of Banff and Lake Louise community members that has provided this much needed relief through the holiday season.”