BANFF – Wolf and grizzly bear activity in important springtime habitat in Banff National Park doubles when the Bow Valley Parkway is off limits to people during the mandatory overnight closure.
Mar 21, 2019 12:00 AM By: Cathy Ellis 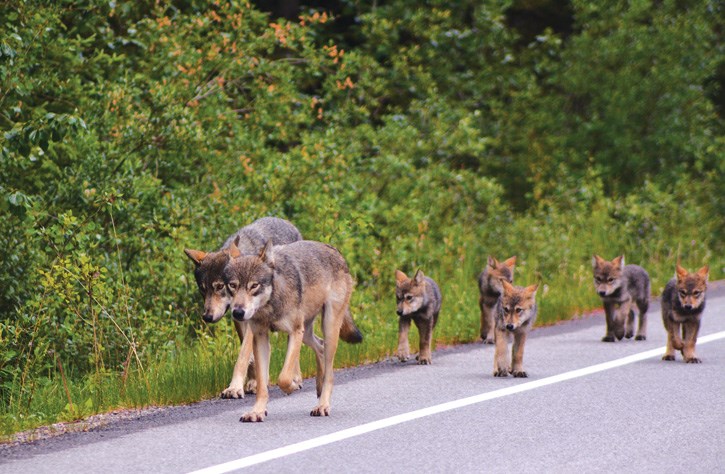 BANFF – Wolf and grizzly bear activity in important springtime habitat in Banff National Park doubles when the Bow Valley Parkway is off limits to people during the mandatory overnight closure.

That’s according to a new study recently published by Parks Canada in the online journal Scientific Reports, which shows that temporal closures -– closures that limit human use during specific times of day – can be used to restore habitat quality and improve wildlife connectivity.

Parks Canada tracked the movements of grizzly bears fitted with GPS collars, set up remote cameras and did roadside surveys to see how nine species of wildlife use the area during the closure compared to when it’s open in the daytime.

“In all three analyses, wildlife use of the Bow Valley Parkway doubled when it was closed to vehicle traffic,” said Jesse Whittington, lead author on the study and wildlife biologist for Banff National Park.

“Our results are consistent with a larger body of evidence throughout the world that generally shows large carnivores avoid encounters with people, and also do so by travelling more at night.”

The number of visitors to Banff National Park has increased to more than four million people a year, and high levels of human use, commercial development and a busy transportation network have reduced habitat quality and connectivity for wildlife.

The Bow Valley Parkway cuts through critical montane habitat, which is considered especially important in the spring because it provides animals with much needed food and a place to raise their young when most of the park is still covered in snow.

Since 2014, vehicles are not permitted on the eastern section of the parkway from the Fireside picnic area to the Johnston Canyon campground from March 1 to June 25 between 8 p.m. and 8 a.m. to improve security for wildlife, including wolves that regularly den there.

The Yellowstone to Yukon (Y2Y) Conservation Initiative welcomes the study.

Aerin Jacob, a conservation scientist with Y2Y, said it’s unusual to see an example of adaptive management, a “fancy way of saying learn-by-doing,” noting these kinds of studies can improve outcomes for wildlife in the long-term.

“Science can help us improve decisions with new information, so this kind of idea has been around a long time but it’s not been tested,” said Jacob.

“This research is really important for conservation because it gives scientific backing to tough decisions.”

For wildlife, both inside and outside parks, human behaviour can increase stress and change how animals hunt, move, rest and mate.

“In this case, this shows us that it’s not about excluding people completely; instead, it’s a small seasonal change to our behaviour,” said Jacob, adding it’s important to focus on when and where animals are most sensitive.

Busy road networks all over the world have been shown to harm wildlife, either directly by being struck and killed, or indirectly because they hamper movement and fragment wildlife populations.

The Parks Canada study noted wildlife may avoid travelling near roads, trails, and towns to reduce their chances of bumping into people or they may become more nocturnal near areas with people.

The authors point to several studies that found grizzly bears avoid high use roads, become more nocturnal to avoid encounters with people, incur elevated stress levels near humans and have lower survival rates in areas of high road density. On the other hand, grizzly bears and other species may select linear features, such as roads and railways with few people as easy travel routes.

While effective for wildlife, the authors of the paper noted permanent or seasonal closures can prove challenging for land managers when they negatively affect local businesses, tourism and recreation.

They say that temporal closures may not be as effective as full closures, but in some cases may be the only option available depending on competing socio-economic management priorities.

In this case, they point to the fact that vehicle traffic has been steadily increasing on the parkway for the past 10 years, from 297,840 in 2007 to 437,061 vehicles in 2017 – and only six per cent of traffic occurred at night before the seasonal closure went into effect.

Whittington said this shows the nighttime closure happens at a time that historically saw lower levels of human use.

“It’s neat because our study shows it didn’t have a huge impact (on people),” he said.

“We know the number of people visiting Banff National Park is steadily increasing and it’s interesting to see it’s also increasing on the
Bow Valley Parkway.”

Studies have shown that many species adapt to human development by becoming more nocturnal and by travelling near developed areas at night to reduce their chances of encountering people.

One study showed detection rates and activity during the day of leopards in Thailand increased during a six-month closure caused by flooding.

Whittington said wildlife could potentially adapt to changes in human activity associated with temporal closures and increase their use of habitat near linear features, such as roads.

“However, no studies to our knowledge have investigated wildlife responses to temporal closures,” he said, adding he believes the Parks study is the first to do so.

Even small-scale conservation actions have potential to improve habitat quality and connectivity in areas that are pinch points to movement, or are located in critical habitat such as around den sites, according to the study

For example, creation of wildlife crossing structures over highways along with highway fencing can reduce wildlife mortality by more than 80 per cent and improve connectivity
for wildlife.

The authors of the study stated closures can be implemented permanently or can be strategically put in place during specific seasons when they have the greatest conservation value.

“The timing of seasonal closures can be optimized based on the movement ecology and life-history of animals,” Whittington said.

The study concluded that a variety of conservation tools ranging from the establishment of wildlife corridors to formation of protected areas are required to address the effects of human activity on wildlife.

“Temporal closures are an important conservation tool that can increase habitat quality and connectivity for wildlife while minimizing effects on people,” said Whittington.

Meanwhile, Y2Y’s Jacob said studies like this are extremely important.

“We can only learn by doing if we do. We need to be committed to longer term research and using that research,” she said.

“If we want to live better with wildlife, we need to update our management to respect their needs.”