“We don’t want to have our guests get infected. We want people who come to Banff to take home a photograph, not to take home a virus," said Councillor Peter Poole.
Apr 27, 2021 11:45 AM By: Cathy Ellis 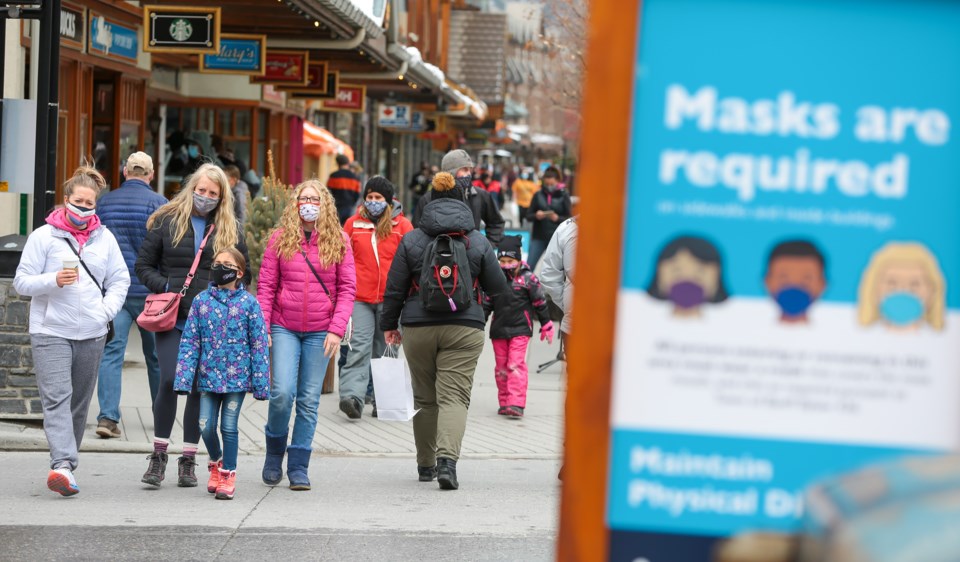 BANFF – Some town councillors are questioning what more the Town of Banff should be doing to prevent the surge in COVID-19 cases, including a call for checkstops at the entrance to town.

Councillor Ted Christensen is lobbying for checkstops given the COVID situation in Banff and Lake Louise, where there were 164 cases as of Monday (April 26) and the region had the second highest per capita active case rate in Alberta.

He said many people in the community see the upcoming closure of Banff Avenue on April 30 as a tourist attraction rather than a safety measure to help residents and visitors socially distance.

“I understand there are additional costs and additional inconvenience caused with checkstops, but I think it makes a very bold statement to the visiting public,” he said.

Town of Banff officials say the municipality does not have authority to close the town to visitors or prevent residents from leaving, noting there are no travel restrictions in Alberta, only recommendations that non-essential travel be limited.

“Unfortunately, the province has not taken the same stand as other provinces in our country, and that is what we are dealing with currently,” said Silvio Adamo, the director of emergency management for the Town of Banff.

“When we did last provide checkstops, we were in a completely different place. The province had essential services only, including in our community, and at that time we also didn’t have provincial systems in place to deal with this pandemic.”

Adamo said the intent of last spring’s checkstops was to ensure essential services that remained opened could serve Banff residents.

“Now, unfortunately, the restrictions are such that restaurants are still open, even if it’s just for takeout, and patios as well as retail is still allowed within the province,” he said.

As of April 26, Banff National Park had the second highest per capita case count in Alberta with 1,219 active cases per 100,000 people, behind only the Regional Municipality of Wood Buffalo, which includes Fort McMurray. Wood Buffalo declared a state of emergency on Sunday evening. The provincial per capita case rate was 455 and the national rate 227.

Banff and Lake Louise have now had 740 COVID-19 cases since the beginning of the pandemic, including 83 new cases diagnosed during week of April 18-24 and 77 the week before.

Alison Gerrits, who is part of Banff’s pandemic emergency response team, said with 164 active cases, Banff is inching closer to the peak of 192 cases at the end of November.

“Based on the daily numbers that are coming out, it is likely we will reach or surpass that within the next few days,” she said.

“We are also aware that we will be seeing more check-ins this week at the Red Carpet Inn,” he said.

He said the health unit on Lynx Street also continues to test Monday through Friday as well as two doctors’ offices in town, adding there were 684 tests completed last week.

The Town did not have an overall positivity rate, but Adamo said Alpine Medical Clinic confirmed a positivity rate of 31 per cent from the 106 tests completed there over the past week.

“As a comparison, the seven-day average provincial positivity rate sits at 9.78 per cent,” he said.

On the vaccination front, Alberta Health Services set up three immunization clinics for those wanting AstraZeneca under the current vaccine eligibility criteria,with 240 people to be immunized each day.

All appointments for the April 27, April 30 and May 4 clinics at the Fenlands recreation centre were booked out within a matter of hours of opening up on the AHS website.

Councillor Chip Olver questioned what more the Town of Banff can be doing to keep residents safe.

“When the checkstops were in place in March, April of last year, our community was so quiet and people are saying to me that they felt safer then,” she said. “People are saying now I don’t feel as safe as I was with our rising case count.”

Coun. Olver said residents have suggested expanding the outdoor mask bylaw to include the busy trail from the pedestrian bridge across the Bow River to the canoe docks.

“I think our residents get the severity. I don’t think all of our visitors do,” she said.

Councillor Peter Poole also voiced concerns about the recent surge in cases, saying he wants to hear from the Bow Valley COVID-19 task force on any more measures that council should adopt.

“A lot of people in our community have anxiety, not just about them contracting the virus; they don’t want to spread it to others, including to their guests,” he said.

At that point, council went in-camera for about 30 minutes to get advice from officials. There was no additional information on that subject when council resumed its meeting, but a motion to keep the discussions confidential was passed.

However, Adamo said the Town of Banff has worked in co-operation with the province from the beginning of the pandemic and worked to support the community with calls for testing, vaccinations and isolation facilities.

“There are just things we have no control over,” he said.