The lesser of two weevils

BANFF – For the first time, a non-native beetle has been released in Banff National Park to control an invasive weed that’s choking out native plants.
Sep 27, 2018 12:00 AM By: Cathy Ellis 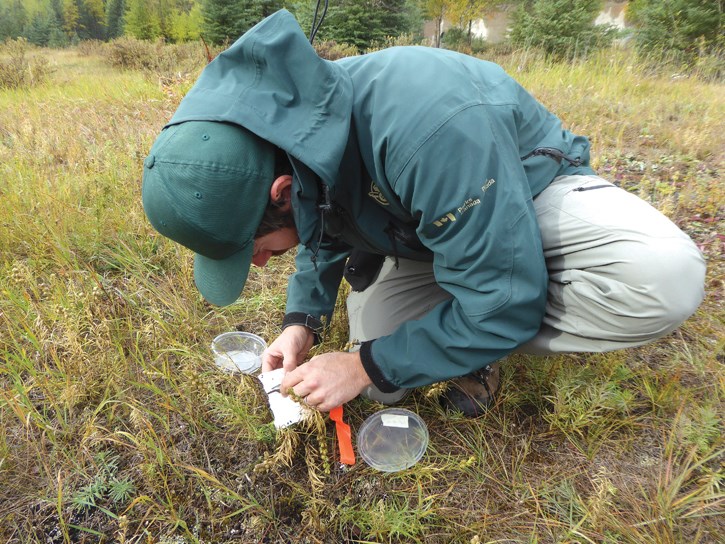 Weevils are being released in Banff National Park to fight the spread of yellow toadflax. Parks resource management technician is pictured at work in the field on the project.

BANFF – For the first time, a non-native beetle has been released in Banff National Park to control an invasive weed that’s choking out native plants.

Parks Canada’s efforts to reduce the rapid spread of yellow toadflax with herbicides and cutting hasn’t seen much success, so it's hoping a tiny weevil will help do the job for them.

About 200 weevils were released last week at an undisclosed site in the Bow Valley near Banff in a bid to stop the introduced plant from taking over native plants and grasses.

Rosemarie De Clerck-Float, a research scientist with Agriculture and Agri-Food Canada, said this particular weevil preys specifically on yellow toadflax by laying eggs in the stem and larvae tunnel inside, thereby weakening the plant.

“I think this is a wonderful biocontrol agent for Banff, especially when yellow toadflax is so bad,” said De Clerck-Float, whose expertise is in classic weed biological control.

“We’re really hoping the density of this insect goes high enough in Banff so they have an impact on this plant and reduce its competitiveness with other desirable vegetation.”

Yellow toadflax, considered a noxious weed in Alberta, was brought to Canada from Europe about 100 years ago, most likely as an ornamental plant. With its bright yellow flowers, the plant resembles snapdragons.

The perennial plant’s abundant seeds and creeping roots allow it to rapidly take over large areas and crowd out native vegetation which animals like deer, elk and moose need to feed upon.

“Yellow toadflax is fairly widespread throughout the park and we’re trying to see if we can get a better grip on it,” she said.

“In high densities, it does out-compete native plants and affects good grazing habitat for ungulates.”

The weevil, a tiny bug with an elongated snout, is also introduced from Europe.

The female weevil will lay an egg or several eggs at the tip of the toadflax’s fast-growing shoots in spring, along with a mysterious liquid. Within a couple of weeks, a structure called a gall forms to protect the developing larvae once the egg hatches.

“Basically, the insect is hijacking the growth potential of the plant, hijacking all the nutrients that go to flowering and seed growth,” said De Clerck-Float.

Officials say biological control has moved well beyond a simple guess and release game and now involves intensive research, a strict review process and approval by the Canadian Food and Inspection Agency.

De Clerck-Float said ongoing research indicates this weevil is only interested in yellow toadflax – and has not been found on any other plants, including other toadflax species or native plants.

The beetle was tested on a close relative of the yellow toadflax called Dalmatian toadflax, but De Clerck-Float said the plant outright rejected the weevil by pushing out the eggs.

“The stem split longitudinally and, when looked at under a microscope, the plant’s cells were growing towards the egg and shoving the egg out of the plant,” she said.

Parks Canada is confident in the research.

“We would not be introducing it if it wasn’t specific to yellow toadflax,” said Park. “There’s nothing in the research to indicate it’s interested in any native plants.”

This particular weevil has been released at several locations in British Columbia and Alberta to control yellow toadflax since 2014, including at Waterton Lakes National Park.

But it is by no means a silver bullet and may take a few years to infiltrate the plant and even more to have an effect in reducing its spread. Initial monitoring will be take place until 2020.

“We have to be patient,” said De Clerck-Float.