BANFF – Three of the world's best alpine mountaineers are presumed dead after attempting to climb the east face of Howse Peak along the Icefields Parkway.
Apr 18, 2019 12:08 PM By: Paul Clarke 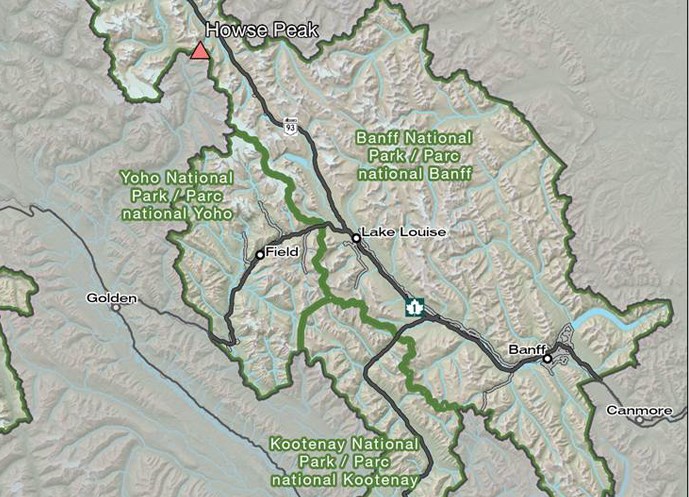 Three mountaineers are presumed dead after being reported overdue on April 17. Visitor safety specialists said they spotted multiple avalanches and debris containing climbing equipment near the east face of Howse Peak where the climbers were attempting to climb.

BANFF – Three of the world's best alpine mountaineers are presumed dead after attempting to climb the east face of Howse Peak along the Icefields Parkway.

According to Parks Canada, the party of three began the highly technical ascent on Tuesday (April 16) and were reported overdue on Wednesday afternoon.

"Based on the assessment of the scene, all three members of the party are presumed to be deceased," wrote Amy Krause, a public relations officer for Parks Canada.

"Further investigation is underway, but recovery efforts are not currently possible due to additional avalanches and dangerous conditions at the scene."

Stephen Holeczi, a Parks Canada visitor safety specialist, said there was "strong evidence" the climbing party was killed by the avalanche but declined to provide any more details.

"Parks Canada crews along with Alpine Helicopters responded almost immediately once the call was placed and due to inclement weather we searched the area for quite a long time and we did see signs of multiple avalanches and debris containing climbing equipment along with strong evidence that the climbing party was deceased and involved in the avalanche."

The three men have been identified by clothing company The North Face as David Lama, Jess Roskelley and Hansjorg Auer and are widely considered among the best alpinists in the world with many first ascents.

"David, Jess and Hansjorg are valued and loved members of The North Face family and we are doing everything we can to support their families, friends and community and the climbing community during this difficult time," said a statement from the company.

"We will continue to keep you updated and ask that you keep our athletes and their loved ones in your heart and thoughts."

Climbers from around the world expressed their shock and disbelief upon learning of the tragic news, including climbers in Canmore who met the three men earlier in the week.

"We've been reading about these guys for years since all of them rose to fame and started to take over the climbing world so if you told me last week that any of them passed anyway anywhere in the world I wouldn't believe it, but to know that all of them passed away in the past 24 hours right here in our own back yard is unbelievable," said Brandon Pullan, editor-in-chief for Gripped Magazine.

He was speaking during a climbing event held at the Canmore Brewing Company on April 18, where the three men had watched a show a week earlier.

Peter Hoang, a local climber in the area, said he didn't know the men well, but spoke with Roskelley a few days earlier to get some information on a route they were planning to climb called Andromeda Strain, which the three men had done four days earlier.

"They actually climbed the route in very subpar conditions," said Hoang. "Jess was very nice in terms of telling us more generous information about the climbing route, but when we climbed it we realized that those guys were really high calibre, because when they did Andromeda Strain the conditions spoke very highly of their skills."

He said his group decided to bail on their attempt to get to the top of Andormeda Strain on the same day the three men died climbing Howse Peak.

"A storm was supposed to hit in the afternoon, the snowpack was really bad and the professional climber on our team called it," said Hoang.

"Sometimes you just pull the short straw because a lot of the locals in town knew the conditions were off, but these were some of the best climbers in the world and it's a sobering thought that they would die in your backyard like this so it's a reminder that the Rockies are real."

All three men made a name for themselves by climbing some of the world's most difficult peaks, including attempting to climb M16, a difficult route on Howse Peak, which was first been done in 1999.

Roskelley was born and raised in Spokane, Washington, and was the youngest American to summit Mt. Everest in 2003 with his father, famed American climber John Roskelley. He also climbed several major ice climbing routes in the Canadian Rockies including, Nemesis, The Real Big Drip, Polar Circus and Hydrophobia.

Lama and Auer were both from Austria and were also known for many daring expeditions.

Among Lama's many accomplishments, he completed the first free ascent of Cerro Torre in the Southern Patagonian Ice Field in South America, which was captured in the documentary Cerro Torre: A snowball’s chance in Hell.

“David dedicated his life to the mountains and his passion for climbing and alpinism shaped and accompanied our family. He always followed his own path and lived his dream. We will accept what now happened as a part of that,” wrote his parents Claudia and Rinzi Lama.

Auer started his career as a professional climber in 2009, after quitting his teaching job at a secondary school, according to his personal website. Highlights of his climbing career include a solo ascent of Lupghar Sar West and the first ascent of Gimmigela East, both are located in the Himalayas.

Howse Peak, where the men were caught in an avalanche, is described as a remote area and an "exceptionally difficult objective" with mixed rock and ice routes requiring advanced alpine mountaineering skills.

Parks Canada has put an area closure in place for the Howse Peak area including Waterfowl Lakes and associated trails and is encouraging the public to give first responders space to work.

Holeczi said Parks Canada will wait for a clear weather window before trying to recover the bodies.