“I think we have our cart before the horse; we’re doing incremental planning rather than cumulative effects planning," said Councillor Peter Poole.
Mar 5, 2021 12:00 PM By: Cathy Ellis 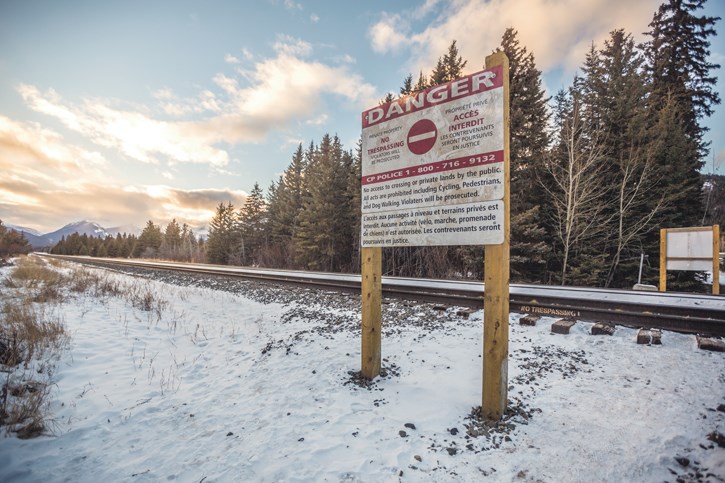 A CP Rail trespassing sign located between Marmot Crescent and Eagle Crescent in Banff. The spot is frequently used by Banffites to cross between the industrial area and residential areas of the town. RMO FILE PHOTO

BANFF – The Town of Banff is looking to revise its environmental site assessment standard to encourage housing in the industrial compound.

Currently, developers are required to do a more onerous phase 2 environmental screening with a development permit application for apartment housing in the compound, but municipal officials say best practice is to start with a phase 1.

Officials say the phase 1 desk-top analysis investigates any previous sources of contamination that may affect the site, and if there is concern, only then would a phase 2 be required, which would include core drilling and soil tests.

“Phase 1 is a less involved and less costly study,” said Eric Bjorge, development planner for the Town of Banff during a  governance and finance committee meeting on Feb. 22.

“We are unclear why it was written this way to begin with, to jump to a phase 2, but it does provide that unnecessary barrier when a phase 2 may not be required in certain cases.”

This is one of a series of proposed land use bylaw amendments to increase residential density and development in Banff as part of a plan to deal with the tourist town’s housing crunch. The most recent data indicates that as of 2019, Banff had a housing shortfall of 308 dwelling units, factoring in targets for reduced overcrowding and a target rental vacancy rate of three per cent.

A 2005 land use bylaw amendment allowed for small apartment residential dwellings in the industrial compound. Since then, more and more housing is being developed.

Additional review of housing standards within the industrial compound, also known as the commercial services district, will form part of an area redevelopment plan under consideration for 2022.

Bjorge said there are many other apartment housing standards that could be considered.

“We’re suggesting we defer those until we can pursue the area redevelopment plan for the CS district,” he said.

One of the big challenges with increasing residential development in the industrial compound is the cost of constructing a safe rail crossing for people living and working there.

Currently, locals illegally cross the Canadian Pacific railway line as a shortcut between Marmot Crescent and the industrial compound, which is a significant employment hub for many in town.

CP has installed signage warning pedestrians against trespassing on its property, and CP police patrol the area.

Councillor Peter Poole said environmental assessments should also include cumulative effects planning for developments, which would consider aspects like a railway crossing.

“I think we have our cart before the horse; we’re doing incremental planning rather than cumulative effects planning. I hope we can figure this out in the coming couple of months.”

Town Manager Kelly Gibson said there have been ongoing discussions with Canadian Pacific Railway for the past two years.

“Those are active discussions right now and we’re looking at design options for that in the future,” he said.

A $15,000 feasibility study for an at-grade crossing was originally approved in Banff’s capital plan in 2011, and another $150,000 for construction the following year. The project was cancelled when CP indicated it was only open to an overpass or tunnel.