“The entanglement was kind of a plant wire similar to the type that people buy tomato plants in, and the elk likely had put its head through it or stepped through it and got entangled around its head and leg," said Banff National Park human-wildlife coexistence specialist Dan Rafla
0
Jan 21, 2020 1:03 PM By: Cathy Ellis 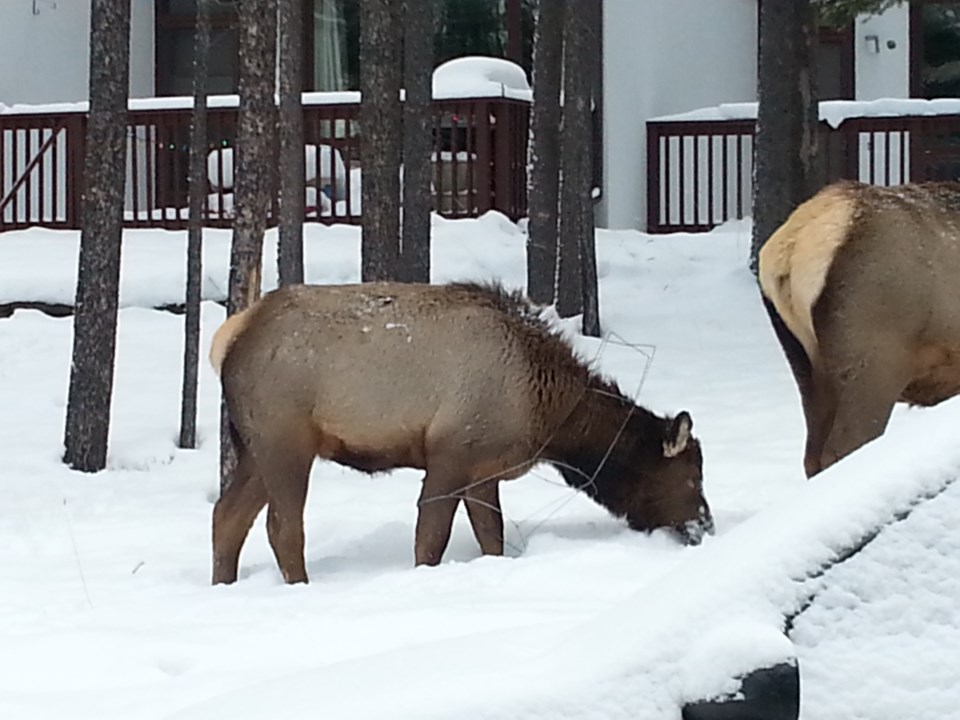 An elk in the Banff townsite with a wire trellis stuck around its head at the beginning of January. PARKS CANADA PHOTO

BANFF – A young elk with a wire trellis wrapped around its head and leg got a helping hand from Parks Canada.

Banff National Park wildlife specialists were called on Jan. 8 to an area near the Banff Centre, where they immobilized a young-of-year male elk so they could safely remove the wire, which likely came from a residential yard.

“It didn’t look like it was going to come off naturally. Sometimes these things are on superficially, but it was stuck between a leg and between the head,” said Dan Rafla, a human-wildlife coexistence specialist.

“The entanglement was kind of a plant wire similar to the type that people buy tomato plants in, and the elk likely had put its head through it or stepped through it and got entangled around its head and leg.”

The decision was made to immobilize the elk amid concerns the wire could further restrict its movement, or lead to injuries with further entanglement.

“It was able to move slightly, but we can’t be certain of the outcome tomorrow or the next day, and if it gets stuck on something, which is very plausible, it could impede its mobility,” said Rafla, adding that would also make the elk more susceptible to predation or further injury.

“It was incumbent upon us and our responsibility to respond. Our staff are quite exceptional and well trained doing this, and the drugs we use and the training that we get make it relatively safe and minimize the risk.”

Banff Centre security staff assisted Parks Canada by keeping people back while the elk was immobilized. The animal was fitted with an ear tag so wildlife specialists could keep a close eye on it.

“We could follow up with its health if there were any ongoing issues as a result of being entangled, but there didn’t seem like there were any injuries at the time,” Rafla said.

“We assumed it likely had recently walked into this kind of entrapment and somebody had called it in right away, so there had not been time to cause injury.”

This incident drives home the message to residents from Parks Canada to make sure yards are clear of anything that could attract wildlife, or allow them to become entangled.

“Often we talk about Christmas lights, especially if they’re hanging lower down. We recommend them up much higher than the tallest bull elk, or preferably inside,” said Rafla.

“We tend not to think about garden implements and a wires that are no longer in use, but animals can get tripped up or entangled with people should pay attention to this.”