It's the second wolf from the Bow Valley wolf pack to be struck and killed by a vehicle along the Trans-Canada Highway this year
Aug 15, 2019 3:45 PM By: Paul Clarke 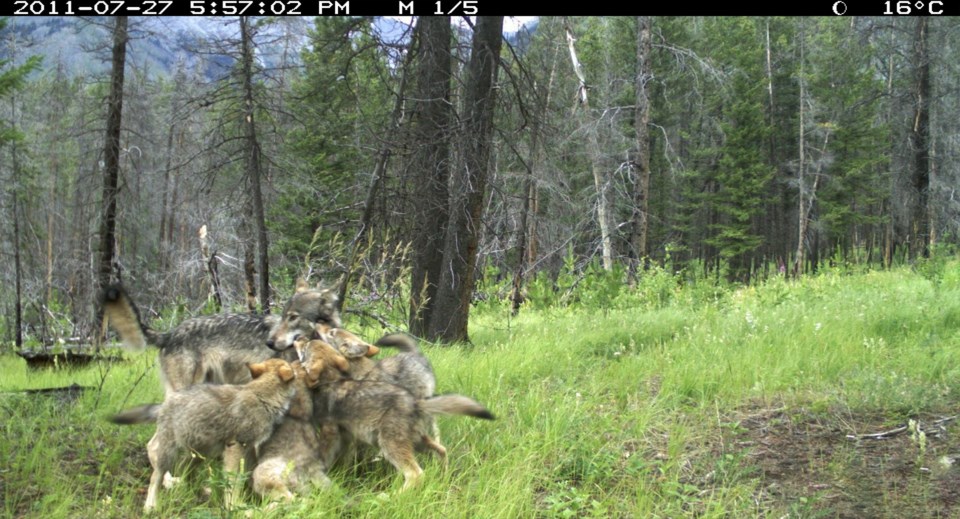 BANFF – A female wolf from the Bow Valley wolf pack was struck and killed by a vehicle along the Trans-Canada Highway in Banff National Park on Saturday (Aug. 10).

According to Parks Canada, the RCMP spotted the dead wolf along the eastbound lanes of the highway between the Sunshine Village access road and the Bow Valley Parkway interchange around 6:45 a.m.

“It had been hit sometime in the early hours of that morning because rigor mortis had set in a little bit,” said Dan Rafla, a human-wildlife co-existence specialist with Parks Canada.

He said it would have been difficult for the driver to spot the wolf because it was raining that evening and the wolf had black fur.

“It’s really unfortunate that this yearling died, but in terms of the pack cohesion the cornerstone is the fact that the breeding pair is still alive and healthy,” said Rafla.

He said the Bow Valley wolf pack now has three adults as well as several pups from this spring’s litter.

“We don’t know exactly how many pups there are at this time because we see them so rarely,” said Rafla, explaining a litter can have as many as six pups, but usually only has three or four.

He said the chance of all of them surviving into the first winter is highly unlikely because of the number of natural and unnatural risks in the Bow Valley.

To help the wolf pack, Parks Canada extended the length, but reduced the size of a closure along the Bow Valley Parkway until Aug. 31. The area on the north side of the parkway between Ranger Creek and the west end of the Hillsdale Split is off-limits to humans.

The death of the female yearling follows the death of her brother earlier this year after he was struck and killed on the Trans-Canada Highway between the Mount Norquay interchange and Forty Mile Creek near Banff. Parks Canada also shot and killed a male wolf on Aug. 9 after it attacked a camper inside their tent in Rampart Creek Campground.

Historically, wolves in the Bow Valley have had had a tough time surviving. They are struck and killed on the roads and railway line in a busy region that draws more than four million visitors a year.

In 2018 at least three wolves were struck and killed on roads and highways in Lake Louise, Yoho and Kootenay National Parks.

While the Trans-Canada Highway is fenced throughout Banff National Park, it is not impermeable to wildlife, which occasionally manage to get on the wrong side of the highway.

Rafla said Parks Canada is working on removing animal attractants along the fence line, such as buffaloberries and improving game trails so that animals are less likely to try and cross the fence.

Rafla said it’s also important people adhere to the 90 km/h speed limit and are aware that wildlife may be on the highway. If you see wildlife on the highway call Banff dispatch at 403-762-1470.