Wolverine populations at risk without connectivity

BANFF – They have a reputation as notoriously badass animals, but wolverines are also very vulnerable.
Apr 4, 2019 12:00 AM By: Cathy Ellis 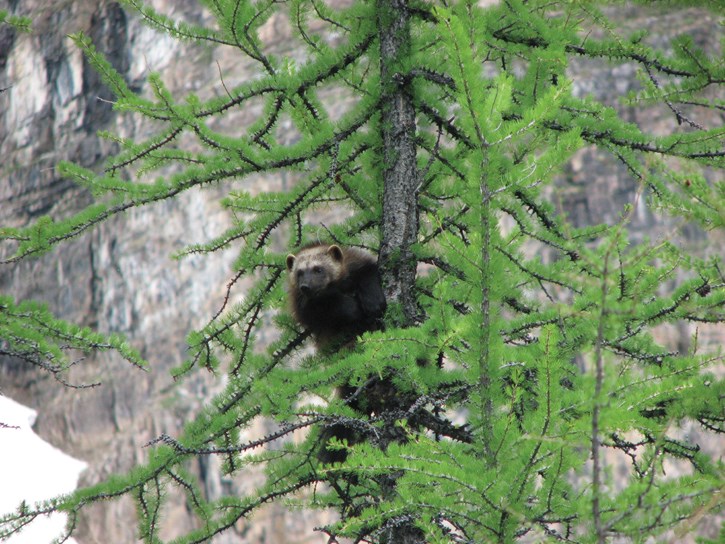 A new study shows there are far fewer wolverines than thought in southwest Alberta and southeastern British Columbia, trapping activities in the region are unsustainable and busy highways are barriers to wolverines, particularly females.

BANFF – They have a reputation as notoriously badass animals, but wolverines are also very vulnerable.

A new study shows there are far fewer wolverines than thought in southwest Alberta and southeastern British Columbia, that trapping activities in the region are unsustainable and busy highways are barriers to wolverines, particularly females.

With shrinking wilderness, wolverines are having a tough time moving from protected areas of Banff, Yoho and Kootenay national parks down into the United States, where wolverines are on the verge of being listed as threatened because there are fewer than 300 individuals.

Wolverines in the northwest U.S are entirely dependent on immigration from the Columbia and Canadian Rocky Mountains, but research shows human pressures have led to a “connectivity sink” between the mountain parks and Glacier-Waterton region.

“We know trans-border connectivity is literally hanging by a thread and we basically have a density trough in the middle,” said Bow Valley scientist Tony Clevenger during a presentation at Bow Valley Naturalists on March 26.

“It’s almost impossible for wolverines from the population up here to connect to the northern U.S. Rocky Mountains. It doesn’t look good for maintaining this important avenue of gene flow dispersal and this is a continentally significant problem.”

Wolverines prefer to live in the most rugged and remote areas of the mountains and there are three main linkages from Canada to the United States, including the Columbia Mountains, the Rocky Mountains and the Cascades.

“This is extremely important to the wolverine, as it is for grizzly bears and wolves … it’s a lifeline,” said Clevenger.

“These are the avenues for gene flow and keeping these wolverine populations in the northern part of the United States viable in the long-term.”

Their struggles are made even tougher because they are sensitive to human pressures.

Clevenger said growth in the human footprint over the past 100 to 150 years has led to extensive habitat loss and fragmentation, with new pressures such as motorized recreation like snowmobiles and ATVs, and industrial development.

“As we look to the east we have oil and gas development, and to the west we have heli-skiing, hydro, forest extraction, and in both these areas we’ve got road building and trapping,” he said.

Specifically, the study used wolverine DNA samples to estimate population density, look at sustainability of trapping on unprotected lands and the effect the Trans-Canada Highway in Yoho and Kootenay has on wolverine movement and population connectivity.

The study concluded that trapping wolverines is unsustainable. This covered southeast B.C., including the Columbia and Rocky Mountains, and southwest Alberta in the foothills and Rockies.

Clevenger said trapping accounts for 8.4 per cent of annual wolverine mortality in that region, noting one of the study’s official recommendations is to reduce trapping by 50 per cent.

He said another recommendation is to create a buffer around Banff, Yoho and Kootenay, limiting trapping there.

“We know there are four times more trap lines than there are wolverines in that large study area where we assessed sustainability of trap lines,” he said.

While they have huge home ranges, wolverines also have extremely low population densities.

“For every three grizzly bears we have on the landscape, there’s probably space for one wolverine,” Clevenger said, noting wolverines are very territorial.

In Banff, Yoho and Kootenay national parks, 49 wolverines were found – 20 females and 29 males. By comparison, the area south of the parks to the U.S. border detected 23 individuals – nine males and 14 females.

In terms of density, the study shows that for the three national parks alone, the total density of males and females combined was 2.9 and 3.2 individuals per 1,000 square kms for 2011 and 2013, respectively.

Further north in the Willmore wilderness area, studies determined there are 6.8 individuals per 1,000 square kilometres.

“We see a clear pattern of decreasing occupancy from north to south,” said Clevenger. “There’s a decrease in density also towards park boundaries, with higher densities in the centre of the parks.”

The study found that the Trans-Canada Highway through Banff and Yoho is a barrier to wolverine movement, particularly females.

“Even in these protected areas, these populations can be vulnerable to fragmentation,” said Clevenger.

“The real refugia is to the north – in the Willmore, Jasper and the northern part of the Columbia Mountains. That’s where you find higher density of wolverines.”

“They have a fierce reputation and yet they’re really sensitive,” she said. “You have to take a really big picture approach, particularly for an animal that is so low density and reproduces so slowly.”

Jacob said it’s important to look at scientific evidence to determine the biggest threats to the species in order for them to persist into the future.

“We have to address issues on roads and connectivity, we need to make sure we pay the most attention to the most vulnerable of the population, so female wolverine for instance, and make sure they are able to breed and to survive,” she said.

“We know crossing structures and associated fencing work, but we can’t just try to connect populations and not deal with having habitat protection in the most important places or deal with direct mortality.”

For more information on wolverines, go to WolverineWatch.org