Nearly half of Cargill's workers tested positive last spring and the plant was shut down for two weeks.
Apr 30, 2021 10:45 AM By: Canadian Press 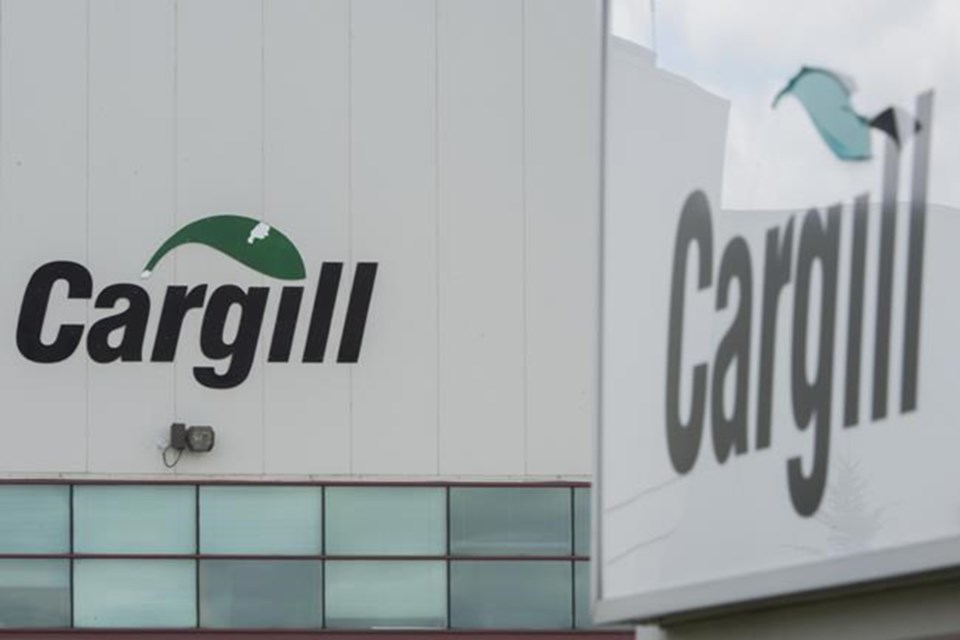 A Cargill meat processing plant is shown in Chambly, Que., south of Montreal, Sunday, May 10, 2020. The plant is closing temporarily after at least 64 workers tested positive for COVID-19, as the pandemic continues in Canada and around the world. THE CANADIAN PRESS/Graham Hughes

Welsh-Rollo, who is a union steward and works on the line packaging meat at Cargill, said there was an "air of excitement" inside the plant, which employs 2,200 people.

"It's really exciting to know we're all going to be protected and there hopefully isn't another outbreak here," she said, still wearing her face shield and a black hoodie with the words "Straight Outta Quarantine."

Plans for a clinic at Cargill had been put off last week when a vaccine shipment was delayed.

The Cargill plant, near High River south of Calgary, and the JBS Canada facility in Brooks were hit hard by COVID-19 outbreaks last year.

Nearly half of Cargill's workers tested positive last spring and the plant was shut down for two weeks.

JBS reduced operations to a single shift each day for a full month. It reported 650 cases among its 2,500 workers.

The two plants together process about 70 per cent of Canada's beef.

Welsh-Rollo said she's worked at Cargill since 2018 and the last year has been unsettling. She said she's been afraid of testing positive.

"I have a five-year-old son at home and I've been worried that he's going to get sick and, if he gets sick, then it's going to be awful for me because I don't like seeing my son with a cold, let alone, COVID," she said.

On Thursday, employees were being called off the line, 40 at a time, and taken upstairs for their shots. Welsh-Rollo was waiting outside to get her dose of Moderna and there was a long lineup from the middle of the plant all the way to the entrance.

"I'm off tomorrow because my son has an appointment, so I need to get in today for sure."

Dr. Annalee Coakley, a Calgary physician who helped organize the clinic, took a break from giving shots to discuss its early progress.

"I'm thrilled. I'm very excited and I was very nervous yesterday with anticipation, but it seems to be working really smoothly inside so we've already done over 290 vaccinations," Coakley said just before noon.

"I'm hoping that they recognize that they're valued in our society in general and I'm hoping they're happy with the process and happy with receiving the vaccination on site. It's great to see that enthusiasm."

"The virus spreads that much faster with the close proximity of the workers and the sort of atmosphere and environment that they work in," he said. "It's important to have as much protection for workers at Cargill and JBS and all the food-processing facilities as possible."

"We have seen cases of the variant at this plant. What do we do if another outbreak occurs?" he asked.

"They can't live without their paycheque."

Hesse said polls at Cargill indicate 70 to 80 per cent of workers are reasonably comfortable with receiving the vaccine, while others are somewhat hesitant.

It's not mandatory, he said, but he hopes most will decide to get a shot.

Hesse said it's important that Cargill and other employers make sure workplaces remain safe even after vaccinations. He said there finally seems to be a recognition that it's a serious workplace issue.

Alberta Health Minister Tyler Shandro announced earlier this week that vaccinations would happen for all meat-packing employees across the province.

They are to be offered to more than 15,000 workers at 136 federal and provincial plants.

This report by The Canadian Press was first published April 29, 2021.

Alberta justice minister apologizes for saying feds, others rooting for COVID disaster
May 13, 2021 10:15 AM