Airdrie bartender's Caesar in running for best in Canada

An Airdrie bartender’s signature creation is once again in the running to be named Canada’s top Caesar.

Scott Strasser
Jul 14, 2021 12:45 PM
Previous Next
Sorso's London Richards puts the finishing touches on one of his signature Caesar cocktails, which is a finalist in a competition to be crowned the best Caesar in Canada.Scott Strasser/Airdrie City View
Expand

An Airdrie bartender’s signature creation is once again in the running to be named Canada’s top Caesar.

Richard is no stranger to the annual competition, having been a finalist multiple times before, and a winner in 2017. He also worked as a judge for the Caesar-making contest in two prior years.

“Basically, Mott’s put it out to bars and restaurants in every province across Canada…to come up with their best take on the classic Caesar cocktail,” he explained. “They do a preliminary competition where they narrow it down and eventually they get it down to the top 10 in each province. It [gets whittled] down to number one in each province and then they fly [the finalists] out to Toronto and…find out the best in Canada.”

Due to the pandemic, he said Mott’s Clamato altered eligibility for the contest this year, and each participating bar had to be nominated by the public in order to reach the later rounds. He submitted his recipe for the competition in the form of a written document, a step-by-step guide and a video of him creating the cocktail.

The competition’s judges recreated the top 30 Caesars based on the video submissions and narrowed the finalists down to the top 10. Now, it’s down to the public voting component to determine whose Caesar is best.

Richard has been tending bars for the last 13 or 14 years. While he doesn’t remember the first Caesar he ever made, he said it was likely one of the first cocktails he learned how to craft.

“It’s been a long time since the very first one, but I would have learned it as one of the basics, because it’s such a staple in this country,” he said. “It originated at the Calgary Inn hotel back in the day in downtown Calgary, which is now the Westin Hotel. I touch in my video on the subject a little bit.”

According to the Canadian Encyclopaedia, Walter Chell invented the Caesar in 1969, to celebrate the opening of the Calgary Inn’s new Italian restaurant, Marco’s. The cocktail took off in popularity, quickly becoming the go-to choice for many thirsty Calgarians.

While the drink’s components are open to interpretation and improvisation, the cocktail traditionally is made with vodka, tomato juice, clam broth, hot sauce and Worcestershire sauce. The beverage is served over ice in a large glass rimmed with celery salt and garnished with a celery stalk and a wedge of lime.

“[Chell] took his inspiration from a classic pasta dish – spaghetti alle vongole – and kind of recreated it in the form of a cocktail,” Richard explained. “A big part of the competition, at least in my opinion, is just understanding the roots behind it, how it all started, being true to the classic cocktail itself while still being playful with it.” 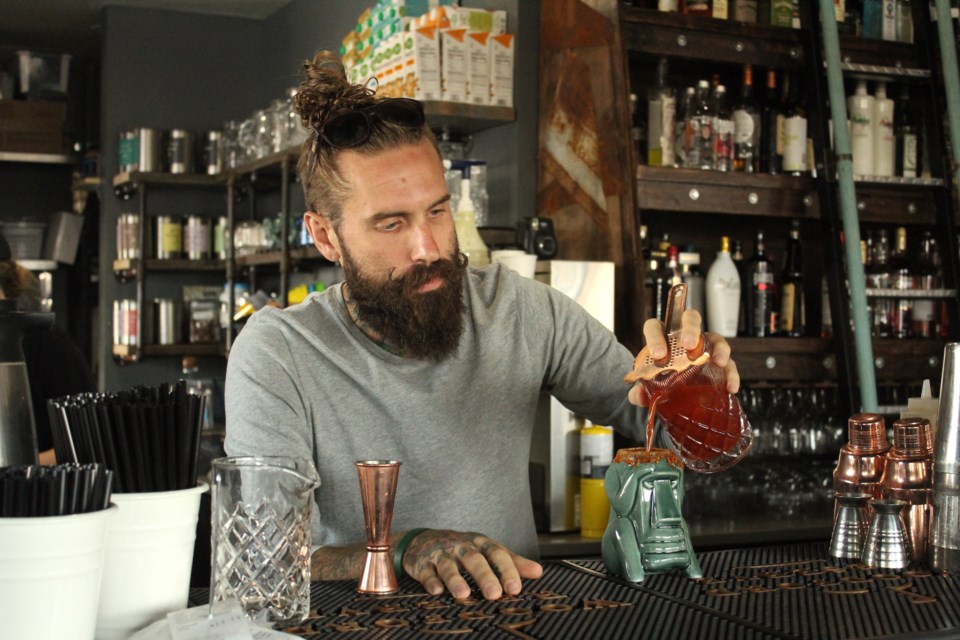 His drink is chilled with specially made Caesar ice cubes, and the glass is rimmed with organic honey, nutmeg, black lava salt, coconut flakes, pepper, chipotle mango and nutmeg.

To finish the drink off, he garnishes the cocktail with torched nutmeg.

“That’s the beauty behind the Caesar,” he said. “Realistically, you can do anything you want with it – the possibilities are endless – as long as [you still have] the fundamental components of what makes a Caesar a Caesar.”

Voting for the “Best Caesar in Town” is open until Aug. 4 and the winner will be announced on Aug. 30. To vote or watch Richard’s video, go to mottsclamato.ca/nominees/

Even though the winning bar will earn a prize of $25,000 from Mott's Clamato, Richard said he’s not hoping to win for himself or Sorso, but for Airdrie as a whole.

“I want to put Airdrie on the map and make us known for something,” he said. “We’re a small community, so to be able to say Airdrie is home to Canada’s best Caesar [would be great].

“We’re up against literally every city and town across Canada, so to say we’re the best at that would be quite the accomplishment.”

About the Author: Scott Strasser