EDMONTON — The Alberta Teachers’ Association wants the province to immediately scrap its draft education curriculum for young students and to start over.
Apr 16, 2021 12:15 PM By: Canadian Press 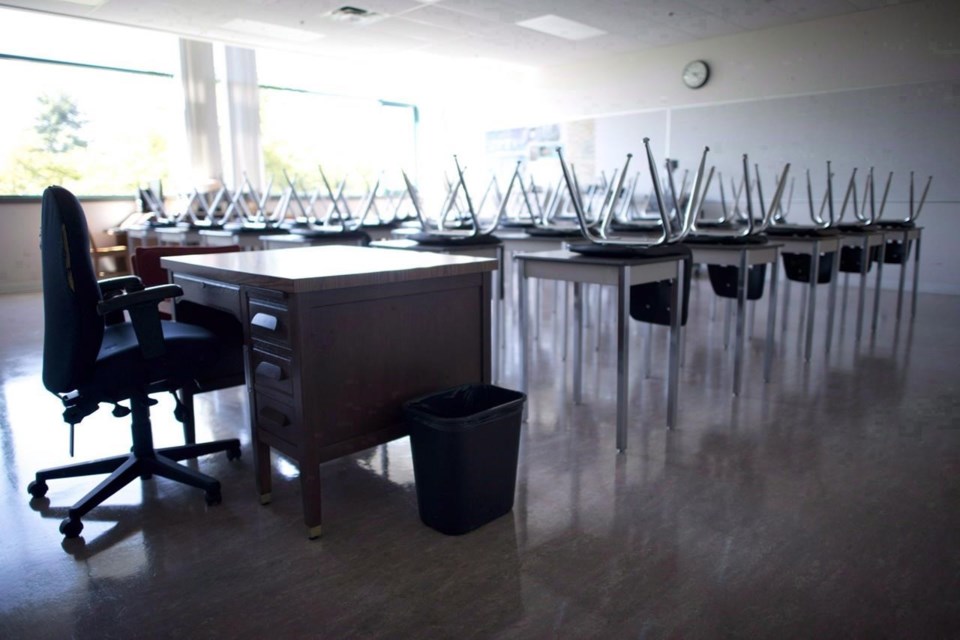 A teacher's desk is pictured in an empty classroom in Vancouver on Sept. 5, 2014. The Alberta Teachers’ Association is urging the government to slam the brakes on its draft curriculum for young students, calling it potentially damaging to child development. THE CANADIAN PRESS/Jonathan Hayward

EDMONTON — The Alberta Teachers’ Association wants the province to immediately scrap its draft education curriculum for young students and to start over.

Association president Jason Schilling says most of his members feel teaching what's being proposed for kids in kindergarten to Grade 6 could damage their development.

“This curriculum is fatally flawed,” Schilling said Thursday. “Many of the teachers believe that putting it before children will cause harm. We cannot allow that to happen.”

Schilling said the plan is not developmentally appropriate for young kids, is jammed with random facts, and too loosely structured with concepts well over students’ heads. He said it pushes Eurocentric history while giving short shrift to francophone and Indigenous cultures and perspectives.

He noted that since the curriculum was introduced by Education Minister Adriana LaGrange two weeks ago, more than 20 school boards have said they will not pilot it in classrooms this fall. They include the public school boards in Edmonton and Calgary.

Schilling pointed to a survey of teachers released last week that revealed an overwhelming call for the draft to be overhauled.

The proposal has also faced accusations that parts of it have been cribbed or lifted verbatim without citation from Wikipedia and other sources.

Advocates, including LaGrange, say it takes a common-sense approach that includes basic concepts, such as multiplication tables, along with real-life skills for the information age, including how to budget and computer code.

LaGrange spokeswoman Nicole Sparrow said in a statement that the Alberta government "has been very clear that we want feedback from Albertans on the draft curriculum.

"Teachers have been very involved and will continue to be involved in the curriculum development process. Alberta’s government brought together more than 100 Alberta teachers, many who are members of the teachers’ union, to review the draft K-6 curriculum and provide feedback."

Schilling said the participation was short and secret.

“We had 100 teachers who met for two days that had to sign a non-disclosure agreement," he said.

"We have no idea what they said, what they saw, and if the feedback they provided to government was actually taken into account and is reflected in the draft.”

He acknowledged teachers can face disciplinary measures if they do not follow lawful direction, such as implementing a curriculum, but added there is a higher principle at stake.

“Teachers who believe this curriculum is flawed and potentially damaging to student learning have the professional responsibility and moral right to refuse to participate in any voluntary piloting.”

Schilling said he hopes school boards will respect such refusals, but declined to say specifically what the teachers association will do, legal or otherwise, should co-operation turn into confrontation down the road.

“We’ll have to cross that bridge when we get to that point, but my hope is that we don’t.”

This report by The Canadian Press was first published April 15, 2021

Alberta justice minister apologizes for saying feds, others rooting for COVID disaster
May 13, 2021 10:15 AM