Jason Klaus and Joshua Frank must now serve a minimum 50 years in prison before they can apply for release, following the murders of Klaus' father, mother and sister.
Feb 9, 2021 1:45 PM By: Canadian Press 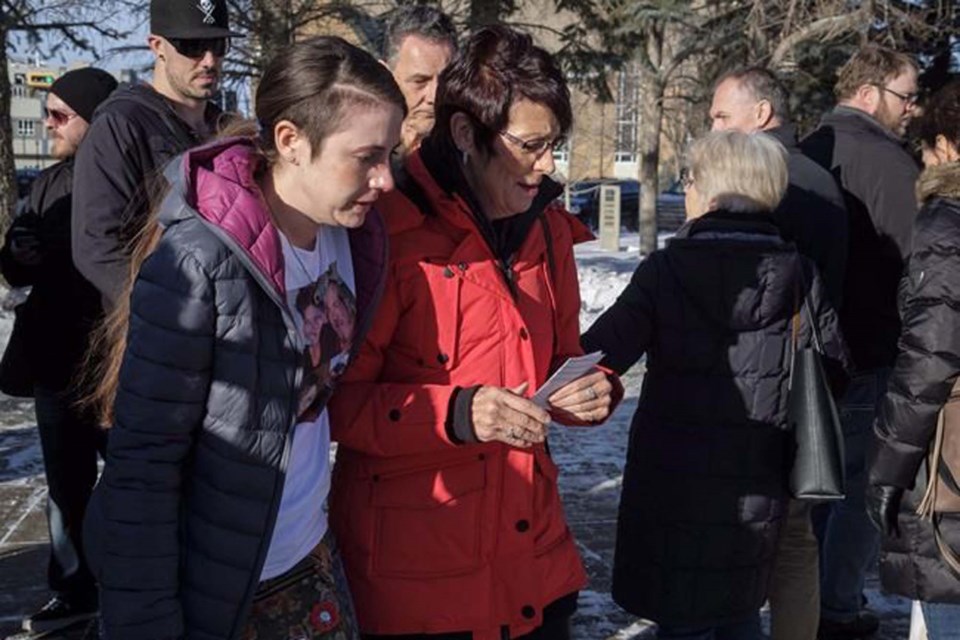 Marilyn Thompson, in red, sister of Gordon Klaus, leaves court with family and friends after Joshua Frank and Jason Klaus were sentenced in Red Deer, Alta., on Feb. 14, 2018. The pair were found guilty of first-degree murder in the shooting deaths of Klaus's parents and sister in a rural home near Castor, Alta., in December 2013. THE CANADIAN PRESS/Jeff McIntosh

CALGARY — The Alberta Court of Appeal has ruled that a trial judge erred by not applying consecutive parole eligibilities for two men convicted in the slayings of three family members.

Jason Klaus and Joshua Frank must now serve a minimum 50 years in prison before they can apply for release.

"The motives, the planning and deliberation and the calculated magnitude of these crimes is such that they stand out and indicate that denunciation in these cases requires what may amount to whole life sentences for both Klaus and Frank," Justice Jack Watson wrote for the majority in a split decision released Monday.

Klaus and Frank were each convicted of three counts of first-degree murder and sentenced to life without parole eligibility for 25 years.

The bodies of Klaus' father and sister, Gordon and Monica Klaus, were discovered in their burned-out farmhouse near Castor, east of Red Deer, in 2013.

The body of his mother, Sandra Klaus, was never found but police believed she also died in the home.

"The errors of principle found in the sentencing reasons require the Court of Appeal to sentence afresh. We are persuaded that, in the end, the disposition reached was disproportionate and unfit," said the decision.

The Appeal Court said that the sentence in the killings of Gordon and Sandra Klaus should be served concurrently but the murder of their daughter warranted an additional 25 years of parole ineligibility.

The Crown had asked for no parole eligibility for 75 years, arguing that the trial judge, Justice Eric Macklin, failed to address deterrence and aggravating and mitigating factors

Slatter said the multiple murders provision in the Criminal Code, which allows for consecutive parole ineligibility periods, "does not apply in cases of convictions for murder entered at the same trial."

The trial heard Klaus was having problems with his father and offered Frank money to kill the family. Frank told police he killed the family because he was scared Klaus would shoot him if he didn't follow through.

Klaus also had a cocaine and gambling addiction and forged cheques on his parents' account.

Macklin ruled that factors in the case were not particularly uncommon, compared with other murders, and did not warrant consecutive sentences. He also suggested that the two men would have a better chance of rehabilitation if they were not "bereft of hope.''

This report by The Canadian Press was first published Feb. 8, 2021

Note to readers: This is a corrected story; a previous version said a split decision can be appealed to the Supreme Court. In fact, a Supreme Court hearing is not automatic in a sentence appeal with a dissenting opinion. The Supreme Court would have to agree to hear the case.