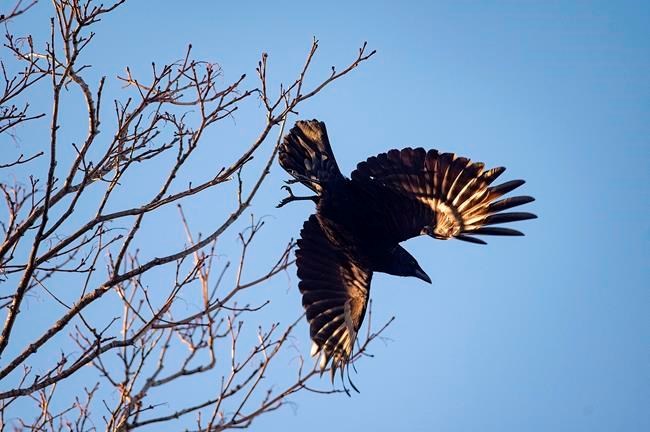 CHARLOTTETOWN — Tensions between Charlottetown's crow foes and lovers have bubbled over this winter, with a number of the birds — which roost in the thousands in the P.E.I. capital — shot with pellet guns.

But over the last decade, there's also been a wide embrace of the feathered residents as a cultural point of pride for the Island city, drawing strong rebukes to efforts to shoo them.

Charlottetown's website notes the "love-hate relationship" between Charlottetonians and their winged counterparts, which the city says have come to roost in the Victoria Park and Brighton neighbourhoods during winter for more than 100 years.

"I have seen 3,000 crows going at sundown, on a calm autumn evening, in one long black silent stream of quivering pinions, to this favorite resting place," reads an excerpt from "Birds of Prince Edward Island: Their habits and characteristics," first published in 1891.

A century later, it's still a familiar sight in Charlottetown.

"Charlottetown at dusk right now, it sometimes looks like a horror movie," said artist Becka Viau, describing a scene she's well-acquainted with after decades of living in the city.

While some people love the dark-feathered birds, others consider them a nuisance because of their loud cawing and the excrement they're known to drop on parked vehicles.

Complaints over the birds have reached a fever-pitch before. Charlottetown tried an unsuccessful pilot project more than a decade ago that involved the use of use noisemakers to pressure the birds to migrate somewhere else.

Since then, the city has decided there is not much it can do.

"The city determined a few years ago that there is no known and successful 'solution' to the roosting crows and, as a result, the city is not (and has not) pursued any further action," Coun. Terry MacLeod, chair of the city's environment and sustainability committee, said in an emailed statement.

Still, opposition to the birds came on strong this year, with some people making formal complaints to councillors or even turning to violence.

Wildlife veterinarian Dr. Lara Cusack of the Atlantic Veterinary College said three crows shot with pellets were brought in for treatment over a period of about five weeks beginning this January.

She said the birds had been dealing with the injuries for some time before being brought in, and they suffered before their deaths.

That news drew supporters out for a small "rally for a caws" last weekend, with about 15 people marching to demand the birds be left alone.

Viau co-founded the now-annual March of the Crows about a decade ago during a similar period of contentiousness.

Last summer, the event was attended by about 1,000 people, who watched as cawing marchers dressed as crows took over the streets. The parade runs from downtown Charlottetown to Victoria Park at dusk, when the crows fly overhead as part of their daily migration.

Viau said the event has struck the desired balance of playful discussion about the crows' place in the community by pushing back against negativity without being too confrontational.

"We didn't disrupt enough to make people mad and tell us to stop doing it, because we're in our 10th year," she said.

Viau said the parade, which now draws tourists from across the country, seems to have instilled more pride in locals towards the city's famously large murder of crows, by celebrating the intelligent birds who call the place home.

"It helps to stimulate discussion within the community about how crows are part of our culture," she said, noting that people wore March of the Crows costumes during last week's rally.

"It's creating some sort of love for the birds."

This report by The Canadian Press was first published March 14, 2020.

Researchers look at humidity as a weapon in the fight against airborne viruses
Apr 4, 2020 2:30 PM

On the rise: Flour demand higher as Canadians turn to baking as welcome respite
Apr 4, 2020 1:30 PM