In a posting on its website, Imperial said it recognizes that job losses are difficult, adding that company support of affected workers will include outplacement services.
Nov 26, 2020 3:40 PM By: Canadian Press 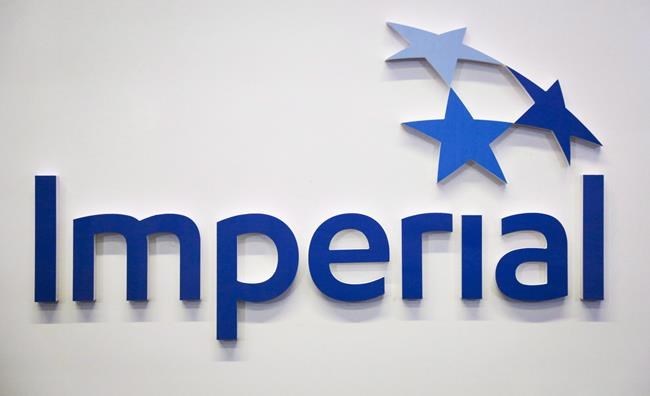 Imperial Oil logo at the company's annual meeting in Calgary on April 28, 2017. Calgary-based Imperial Oil Ltd. says it will cut its employee head count by 200 as part of a cost-cutting initiative. THE CANADIAN PRESS/Jeff McIntosh

Calgary-based Imperial Oil Ltd. said Wednesday it is laying off about 200 of its 6,000 employees across Canada as part of a cost-cutting initiative due to low oil prices.

The oilsands, refining and energy retailing company, which has been reluctant to cut staff during the current and previous industry downturns, also confirmed Wednesday it has reduced the number of contractors it employs by about 450 since the start of the year.

Imperial is 69.6 per cent owned by U.S. energy giant ExxonMobil Corp., which said in October it would cut its global workforce by about 15 per cent, equating to about 14,000 jobs.

"There has been study work underway globally to assess the potential for further cost reductions from structural efficiencies and lower activity levels across our business,' said Imperial spokeswoman Lisa Schmidt in an email.

"This work includes an evaluation of workforce requirements around the world on a country-by-country basis, including in Canada. Imperial has been engaged on this work with ExxonMobil."

She said the job reduction decisions were made in Imperial's best interest, not ordered by ExxonMobil, adding she was unable to say where the job cuts would be implemented.

In a separate news release on Wednesday, Exxon said it expects up to 300 job reductions in Canada by the end of 2021 from Imperial as well as its wholly owned subsidiaries, ExxonMobil Canada Ltd. and ExxonMobil Business Centre Canada ULC.

Imperial committed in March to cut spending by $1 billion, including a $500 million reduction in capital spending plus $500 million in lower operating expenses, due to lower energy demand caused by lockdowns to prevent spread of the COVID-19 virus.

"When the pandemic hit, we immediately started developing plans to respond and minimize the business impact during the downturn," CEO Brad Corson said at the company's recent investor day, adding the company is well ahead of its cost-cutting targets.

"And of course, we're going to continue to look for further efficiencies going forward."

In a posting on its website, Imperial said it recognizes that job losses are difficult, adding that company support of affected workers will include outplacement services.

Earlier this week, Imperial confirmed it will relinquish its contract to provide business management services to Syncrude Canada Ltd. when Suncor Energy Inc. takes over as operator of its oilsands mine and upgrader in northern Alberta at the end of 2021.

Under the contract, which has been in place for about 14 years, staff from Imperial were seconded to certain positions at Syncrude and provided people to assist in implementing strategies, while Syncrude remained the day-to-day operator.

Suncor said it hopes to realize cost-saving synergies of about $300 million per year as operator.

The Imperial job cuts are part of a trend by Calgary oil and gas companies who have been reporting reduced earnings on lower commodity prices.

Cenovus Energy Inc. and Husky Energy Inc. have announced they will cut as many as one in four jobs, potentially more than 2,000 workers, if their merger announced in October is closed as expected early next year.

This report by The Canadian Press was first published Nov. 25, 2020.