Some Foothills area health-care jobs to be privatized

Alberta Health Services charged to implement strategy to save money
Oct 16, 2020 11:15 AM By: Bruce Campbell 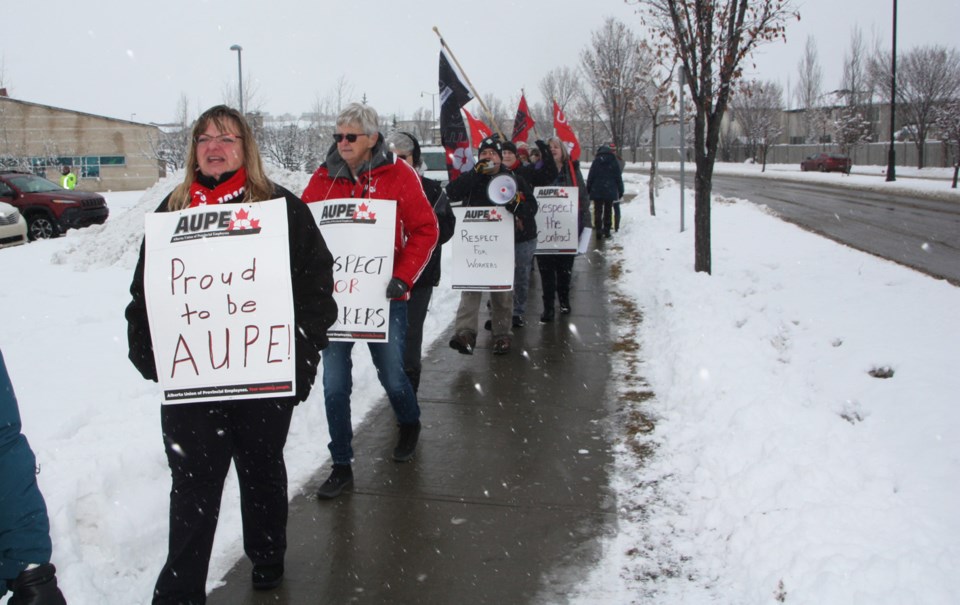 Members of the Alberta Union of Provincial Employees protest during the Chrismas season in 2019 over changes to health care. The union is concerned about the Alberta government's announcement on Oct. 13 to the privatization of some services. (Bruce Campbell/Western Wheel)

Several jobs in the Okotoks area could be lost due to the Alberta government’s Oct. 13 announcement of the privatization of some services in the health sector, said a union representative.

“Here in the High River Hospital all of our laundry, food service are done in house, so you would be looking at 30 or 40 jobs just in High River alone,” said Bonnie Gostola, a vice-president with the Alberta Union of Provincial Employees.

“At the Urgent Care Centre in Okotoks we have cleaning staff, we have food services staff it’s going to be probably another 10 jobs… And for most of them, they are part-time jobs, so they are people who are not working.”

Lab technicians, who are not members of AUPE, also were mentioned in the Province’s financial restructuring.

Alberta Health Minister Tyler Shandro announced on Oct. 13 the provincial  government is directing Alberta Health Services to begin implementing a strategy which is expected to save $600-million annually.

Some of those strategies including having laundry, custodial, food services and others going from the public sector to the private sector.

A press release from AUPE on Oct. 13 stated the result of the government’s announcement will be the sell-off of 9,700 general support service jobs and the elimination of 800 clinical positions.

Highwood MLA RJ Sigurdson said Shandro's announcement should not come as a surprise.

“This is part of a campaign promise to review the health-care process,” Sigurdson said. “We have been actively vocal on the recommendations. I believe there were 72 for AHS to find efficiencies and optimize the system to be able to direct the money to the front-lines, which is where it is needed, especially in the onslaught of a pandemic.”

An independent review from Ernst and Young released in February had 57 recommendations and 72 saving opportunities.

“We are taking a very, slow diligent approach and phase it in the years to come it is not going to happen overnight,” Sigurdson said. “I say this over and over again, this is not going to affect doctors and nurses.”

There are also plans to eliminate a minimum of 100 management positions and a full review of senior AHS executives will be completed before the end of the fiscal year.

Sigurdson said he heard concerns during the 2019 campaign from health-care workers that there was “over-management” in some areas of the health care system.

Services such as laundry, custodial and others are not being eliminated, they will be shifted to the private sector, he said.

“It just means we are going to slowly start requesting request for proposals to deliver those services through the private sector.”

Gostola is sceptical that there will be work, for example for the the present laundry workers in High River Hospital once things are privatized.

“I think in this region, the laundry will be shipped to Calgary,” said Gostola who lives in the Foothills area. “Would somebody who lives in the Town of High River have the opportunity to actually go to a private job where they already have staff.

“These people will not have work.”

Sigurdson stressed that may not be the case.

“Nothing is set in stone, anybody has the opportunity to provide a RFP for the delivery of service,” Sigurdson said. “I would think that local area providers in laundry, cafeteria or janitorial services will have the ability to bid on these contracts and due to the relative close proximity to the hospital they wouldn’t have to deal with the elongated transportation costs of centralization in large urban centres that they would have a competitive advantage…

"Somebody working in a hospital in any of the small towns could be not working for the public sector directly with AHS on a Friday, but will be working in the private sector on the Monday and carry on.”

The Province will issue requests for proposals for laundry and community lab services by the end of the year.

AHS has been directed to come up with a business proposal for custodial and food services in 2022 and 2023.

About the Author: Bruce Campbell

Bruce Campbell is the editor for Okotokstoday.ca and the Western Wheel newspaper. He is a graduate of Mount Royal College journalism program, 1991. For story tips contact bcampbell@okotoks.greatwest.ca
Read more