Banff plans for a zero waste future and with the eco-friendly initiatives of businesses like Park Distillery and the Rimrock Resort Hotel, its looking bright.
0
Jul 14, 2019 11:00 AM By: Kiah Lucero 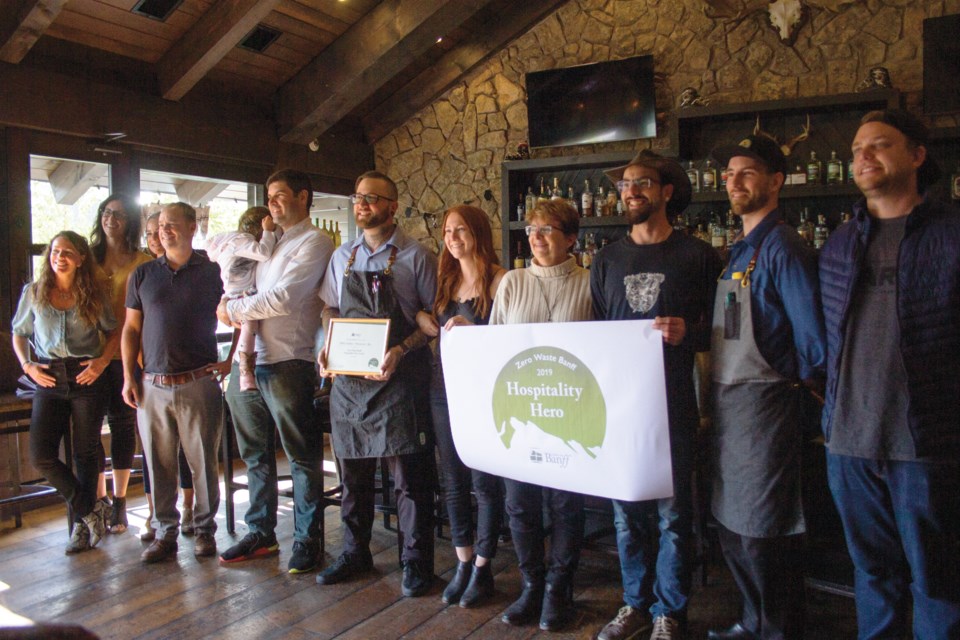 BANFF – As the Town of Banff works towards a zero waste future, businesses like Park Distillery and the Rimrock Resort Hotel are helping to lead the way with eco-friendly initiatives.

“The 85 per cent audit from the town was 30 per cent more than I was expecting us to do,” said sous-chef Will Phillips. “I knew we were going to do well, but that well for our first audit. Wow. Totally wow.”

Park Distillery, within only two weeks of implementing the food waste collection program, successfully diverted one tonne of its weekly food waste. This amounts to 50 tonnes of food waste diverted from Banff’s landfills.

“Growing up with it as the norm, I’ve never understood people who don’t understand how to do it, don’t want to do it, or think that it’s really difficult, or anything along those lines,” Phillips said. “Because it just takes a second, maybe an extra second to think about which bin you’re putting it in and where it’s going to end up in at the end of all of that.”

According to the Town of Banff, commercial businesses are responsible for 65 per cent of garbage sent to the landfill each year from the resort community. Organic material accounts for nearly 50 per cent of the total waste amounts. In efforts to reduce non-residential waste, Zero Waste Banff focused on reducing food waste for its 2019 initiative.

By 2028, the Town of Banff aims to reduce how much material is sent to the landfill by 70 per cent and completely eliminate the need to landfill waste by 2050. From the get-go, the staff at Park Distillery were on-board with the food waste diversion initiative, according to general manager Micayla Walker.

“We didn’t really have anyone that wasn’t receptive to be honest … But I think that every single person was super behind it and was really excited that our restaurant was starting to compost,” Walker said.

Park Distillery isn’t the only business in town leading the commercial climate change fight in Banff. Since 2011, the Rimrock Resort Hotel partnered with the Green Key Eco-Rating and has been reducing its environmental impact since.

Through the Sulphur Mountain Green collective, a partnership with the Banff Gondola and the Upper Banff Hot Springs, it takes on cleaning up Sulphur Mountain each year. At its last cleanup the collective had about 42 volunteers join the effort according to Bree Todd, chair of the hotel’s green committee.

“We’re just trying to take responsibility of the mountain. As I’ve said before, basically our businesses are the only reason that there are humans up here. So if there is any human waste left behind, it’s our responsibility to make sure that our environmental impact is as small as possible.”

Most recently, the Rimrock Resort Hotel replaced and recycled all of its pillows. In total, 2,500 pillows were donated to Diabetes Canada, the Dream Centre and even local residents. Todd ensured that every pillow found a new home.

“We had pillows all down our really long hallways. There was so many pillows and the thought of those just going into the landfill was so sad,” Todd said.

“We spent a lot of time trying to find places for them, but they are all re-homed. We didn’t throw out any.”

For its next eco-friendly initiative, the Rimrock Resort Hotel will be working with the Town of Banff to create a sustainable composting process. Furthermore, the Sulphur Mountain Green collective will be meeting up for its next cleanup on July 30 from 1 p.m. to 3 p.m.