STONEY NAKODA – The Bearspaw-Kananaskis Travel Centre will open later than initially anticipated, however it hopes to be open by the end of November.
0
Nov 1, 2018 12:00 AM By: Paul Clarke 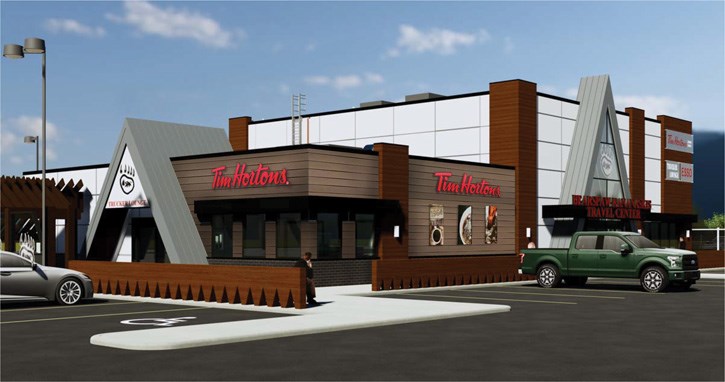 A rendering of the new Bearspaw-Kananaskis Travel Centre, located beside the Stoney Nakoda Casino and Resort. It is now expected to open by the end of November.

STONEY NAKODA – The Bearspaw-Kananaskis Travel Centre will open later than initially anticipated, however it hopes to be open by the end of November.

Located beside the Stoney Nakoda Casino and Resort, it was originally slated to open in late August or early September, however due to design concerns its opening day was pushed back.

“We’re trying to finish before the end of November, but we do have a two-week window,” said Rob Shotclose, the CEO for the Bearspaw First Nation.

When the 6,000 square-foot building opens, it is expected to become a hub for travellers looking to stretch their legs, grab a bite to eat, or fill up their gas tank.

Tim Hortons and an ESSO gas station will anchor the new site and there will also be a 1,200-square-foot mezzanine on the second floor, a gift shop and a private lounge area for truckers, with change rooms and showers.
The travel centre will also be open 24 hours a day, seven days a week.

According to Shotclose, the delay in construction was caused by design concerns from Tim Hortons head office in Ontario.

“It’s not the local franchisee’s decision, it’s more so the corporation itself on how they want things done,” said Shotclose.

He said the design changes have added some extra costs to the $5-million project because Bearspaw is responsible for tenant improvements to the facility.

“It’s worth putting some more investment into making it right the first time because it will cost you more later,” said Shotclose. “Our budget has increased a bit, but we’ll find the resources to finish it and recoup it later.”

He said the travel centre is expected to create at least 35 new jobs and help generate $65,000 per year in revenue for the entire nation.

“We’ll be paying approximately $65,000 a year for the lease of the land to the Stoney tribe because the lands are still common,” said Shotclose, explaining any profits from the project will go to the Bearspaw band.

To help the project get off the ground, the provincial government provided $625,000 in grant funding, while the federal government kicked in another $700,000.

The travel centre is located on land that was designated in a 2002 referendum, which set aside 96 hectares for new development.

A recent referendum to designate nearly 3,000 hectares of land for commercial development throughout the reserve was rejected by voters on
Oct. 18.

“I think it’s going to be a great service to the tourists, the travellers and the local Stoney community,” said Shotclose about the new travel centre. “It’s also a big job creator for the local economy.”

Tim Hortons will be hosting a job fair on Monday (Nov. 5) at the Bearspaw Youth Centre.