CANMORE – When Travis Erlam and Richard Mueller started a new program to offer Brazilian jiu-jitsu training in Canmore, they never expected it would lead them to becoming small business owners.
0
Mar 14, 2019 12:00 AM By: Tanya Foubert 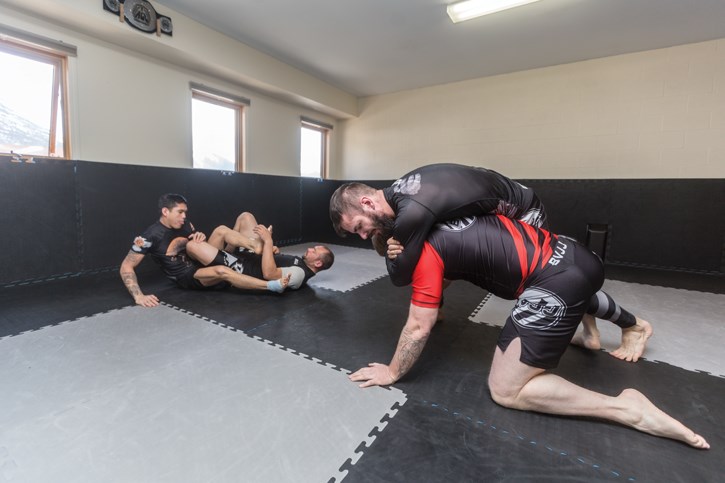 CANMORE – When Travis Erlam and Richard Mueller started a new program to offer Brazilian jiu-jitsu training in Canmore, they never expected it would lead them to becoming small business owners.

The business partners have been successfully running the Bow Valley Jiu Jitsu club since 2015 and recently expanded to their own dedicated commercial gym space in Bow Meadows Crescent.

The learning curve has been a challenge on and off the mats, as the business partners were only white belts when they decided to establish the club locally and each already has a full time job in the community.

It all began in 2015 when the Canmore Fight Club shut its doors, Erlam and Mueller lost the space in which they had been practicing jiu-jitsu.

They reached out to a mentor and instructor in Calgary – Brian Bird – and were supported in establishing a club in the Bow Valley.

“Me and Rich thought it was the end of it, but we got together and we said ‘we have to keep it going,’ ” Erlam said. “We put money together to buy mats and held our first class on Aug. 11, 2015 at Lifeworks Gym.

“From there, it was pretty much a club. We wanted to continue doing jiu-jitsu, but we never thought it would grow to where it is at now.”

After a slow start in the first year, the club began to see increased attendance, new people joining up and an interest in youth programming.

The coaches brought on youth classes in 2018 as a trial program and the response was incredible for both Mueller and Erlam.

But there were challenges with the expanding program and the limited space available at Lifeworks. Each practice required setting up and tearing down of the mats needed for practice and sparring. While grateful for the help the gym provided the startup club, they knew it was time to start exploring space options.

“That was when we realized if we are going to continue with the kids programming, we have to start looking for our own space,” Mueller said. “It was time for us to either make the leap and see where we landed, or stay where we were and keep treading water.”

They began looking, but were also aware of how difficult it is in Canmore to find the right sized gym space that would support the growing club’s needs.

“Trying to find space in Canmore is so hard,” Mueller said. “This one kind of landed in our lap and at the time we were looking to expand.”

With the new gym officially open at #208-105 Bow Meadows Crescent, BVJJ is running 11 classes a week and recently began hosting women’s only programs every second Saturday at 11 a.m.

“I am so happy with the women’s class,” Erlam said. “I have wanted to do that for a while and it is picking up and getting more interest each class.”

While students are learning on the mats in the new space, Mueller and Erlam are also learning about owning and operating their own small business. From signing a lease, keeping the lights on, public relations to ordering all the gear their students need with the BVJJ logo on it – they have been hard at work setting up the club for future success in the new space.

Mueller said the club has become self sufficient financially thanks to how popular the programming is, but they are not going to be quitting their day jobs any time soon.

“Profit has never been the main driver for the club,” he said. “It has always been about making the community a better place.”