BANFF – The Bow Valley labour market continues to be a leader for the province with two per cent lower unemployment than the Albertan average.
May 10, 2019 12:35 PM By: Aryn Toombs 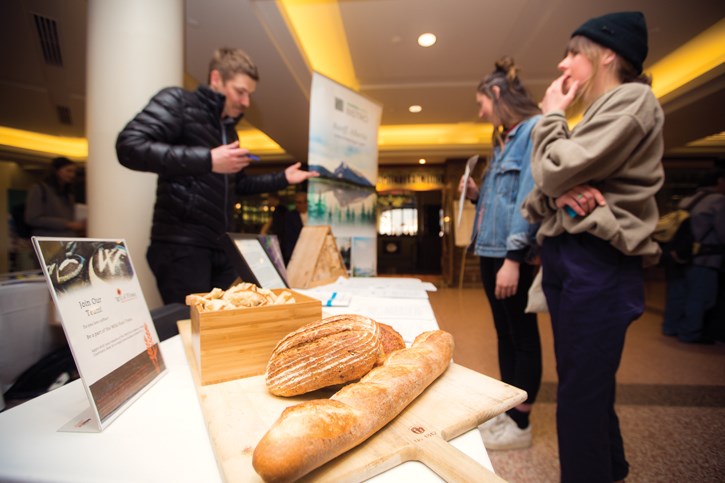 Job seekers speak to a representative of Wild Flour Bakery at the spring job fair held at Cascade Mall in Canmore on Thursday (May 2). Over 340 job seekers attended the fair put on by the Job Resource Centre.

BANFF – The Bow Valley labour market continues to be a leader for the province with two per cent lower unemployment than the Albertan average.

According to the latest labour market review by the Job Resource Centre, the valley sits at an unemployment rate of 4.8 per cent, which ties with B.C. for Canada’s lowest average unemployment.

Occupational demand is also up, with employers posting nine per cent more job orders between August of 2018 and January 2019 compared to the same 2017-2018 period.

A total of 1,511 job orders were posted in the latest period.

At Thursday’s (May 2) spring hiring fair held at Cascade Mall, over 340 potential applicants met with Banff employers to fill spring and summer demand.

“The winter jobs are coming to an end, and this week and next week we have a wave of graduates arriving … and all these employers have about a quarter of their workforce for the summer to fill,” said Michel Dufresne, director of the Job Resource Centre.

This year’s fair spoke to the shifting changes in labour market demographics, with more people in their late 20s and early 30s attending the fair, along with greater numbers of Indigenous job seekers.

Dufresne said that the competition for employees from Ontario and Quebec is higher now that the minimum wage has risen across the country, with applicants from those provinces dropping in numbers over the past several years.

“They can work at Mont Tremblant or Blue Mountain or other resorts for a minimum wage job,” he said.

The centre is watching closely to see if the recent changes to Alberta’s new $15 an hour wage will draw some of those workers back to Banff.

Overall, the average starting wage in the Bow Valley was $18.23, which Dufresne said has risen in part because of inflationary pressure and because of the rise in the minimum wage.

“We’ve always had a bit of a gap in Banff just to be attractive. Employers have to pay more than minimum wage,” he said.

The highest growth in hourly wages occurred in the travel and tourism sector with $17.38 in 2018 rising to $22.33 in 2019. That sector includes interpreters, guides, tour operators and drivers, and makes up about five percent of total occupational demand for the Bow Valley. Trades, labour, food and kitchen staff, along with sales and service positions – which makeup 58.6 per cent of occupational demand – have seen more modest wage increases of less than a dollar on average.