CANMORE – The wait is finally over. More than a year-and-a-half after it closed for renovations, the Canmore Hotel quietly reopened its doors to the public on Sept. 17.
0
Sep 27, 2018 12:00 AM By: Paul Clarke 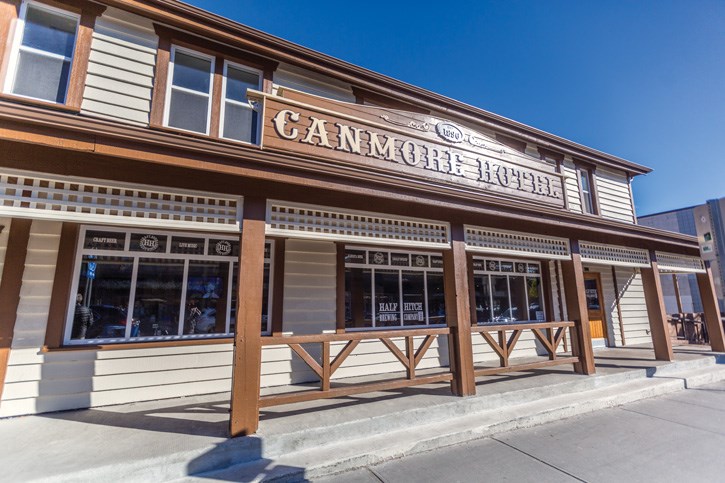 The Half Hitch Brewing Company, now open at the Canmore Hotel, is pictured on Tuesday (Sept. 25).

CANMORE – The wait is finally over.

More than a year-and-a-half after it closed for renovations, the Canmore Hotel quietly reopened its doors to the public on Sept. 17.

Home to Half Hitch, a craft beer company from Cochrane, the renovated property still pays homage to the building’s historic character, albeit with a new restaurant on the main floor, an 80 bed hostel on the second floor and the possibility of a cannabis dispensary at the back of the building.

The historic two-storey building on Main Street was originally bought by a Calgary developer in 2006 to save it from demolition before eventually being sold to Robby Aurora in December 2016.

Known locally as the “Ho,” the building is Canmore’s only designated municipal historic resource and the town’s oldest building at 128 years old.

While the white panel and green trim on its exterior may be gone, Aurora said the aim of the renovation was to make it an inviting place for friends and family while also maintaining the historical significance of the building.

“We’ve maintained many of the historical elements throughout the property, including, for example, incorporating the original doors from the hotel into the design of the bar,” said Aurora.

During renovation of the property, Aurora said they found several newspaper articles from the 1940s buried in the walls and decided to incorporate that history into the property’s new design.

“I was digging through the walls and the floors of the property and found newspaper articles from World War Two, so we took gems like that that we found in the property and incorporated it into the design elements of the current bar space,” he said. “We’re also going to be incorporating similar historical elements into the hostel component as well.”

Half Hitch, which is leasing the main floor of the building, did not respond to an interview request, however, according to Aurora, the restaurant will be family oriented during the day and maintain its vibrancy at night with live music and entertainment.

“Just like before, the objective is to make the Canmore Hotel a place that allows generations to foster new and vibrant memories,” said Aurora.

In addition to the restaurant, which has a capacity of 333 people including two patios, he said renovations are still underway to complete the new hostel on the second floor.

Once complete, there will be
15 rooms and a total of 80 beds, as well as a separate entrance from Seventh Avenue.

He declined to go into detail about the cannabis dispensary, but confirmed the Town approved its business licence to sell cannabis when it becomes legal on Oct. 17.

“We’re currently still exploring the opportunity to have a cannabis location in that back retail store,” said Aurora. “We are still working on a few different opportunities to see what would be the right fit in that space.”

While the restaurant may already be open, he said there will be an official grand opening on Sept. 28.