CANMORE – There are very few businesses in the Bow Valley that have had more of an impact on the esthetics of the community than CanSign.
0
Feb 14, 2019 12:00 AM By: Paul Clarke 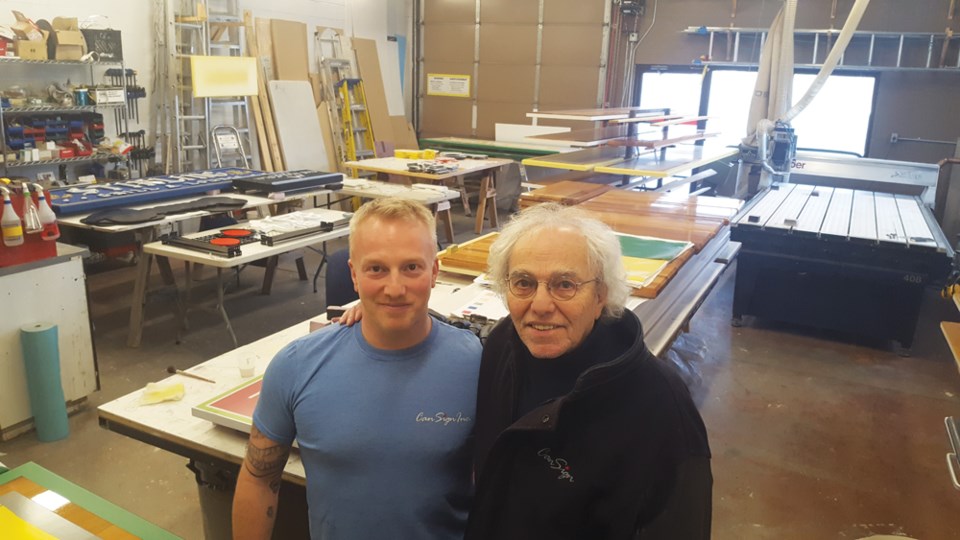 Mike Halprin (left) and his father Josh Halprin have owned and operated CanSign for the past 40 years.

CANMORE – There are very few businesses in the Bow Valley that have had more of an impact on the esthetics of the community than CanSign.

Over the past forty years, CanSign has been the go to business for all things signage related and created signs for some of biggest organizations in the valley, including Parks Canada, Lake Louise Ski Resort, Spring Creek Developments and both municipalities.

Over those years, the family-owned shop has evolved from a garage-based business selling silk-screen T-shirts to a high-tech commercial operation with seven full-time employees.

In its early years the fledging business was owned and operated by Josh Halprin, who had a passion as a young man growing up in Winnipeg to create silk-screen T-shirts.

In 1979, he moved to Canmore with his wife and brought his passion with him opening up a souvenir shop in Banff.

“We had the typical souvenir stuff, but our real strength was in these silk-screen T-shirts,” said Josh, who moved to Canmore when he was 21 years old.

Geared toward tourists, the store was largely successful, however two years into business interest rates skyrocketed making it cost prohibitive to continue to operate.

Taking that suggestion to heart, he rolled up his sleeves and began learning the intricacies of the sign industry, which included learning how to create hand-painted signs.

Within a few years he managed to establish himself as the only sign shop in the Bow Valley and was soon busy creating signs for the 1988 Winter Olympics.

“It was a great opportunity, but it was just about our downfall,” said Josh. “We had to be competitive and some of the stuff I couldn’t make because we didn’t have any of the technology like we do now.”

To help with the family business, Mike Halprin would often spend hours at the shop after school peeling and sanding signs for his father.

“It was nothing technical or fancy, but I’ve been hands on in the shop for as long as I can remember,” recalled Mike.

In the early 1990s, business at his dad’s shop slowed down as a recession took hold so Mike decided to head to Red Deer to work for a sign shop there for a few years before moving to Vancouver to pursue his other passion as a DJ.

Soon after arriving in Vancouver he found a job at another sign shop and got his first opportunity to work with a digital printer, which few signs shops had in those days.

After spending several years in Vancouver, in 2004 he decided it was time to return to Canmore to help his dad, who was now working up to16 hours a day, six-days a week to keep up with demand.

Almost immediately upon his return they started looking at how they could improve the quality and efficiency of the shop and eventually decided to purchase a digital printer so they could meet the demands of commercial and industrial clients.

“By using my dad’s knowledge and know how and what I had learned in Vancouver we were able to make a name for ourselves and become the go-to sign shop,” said Mike, adding they now have three state-of-the-art digital printers at their Bow Meadows Crescent workshop in Canmore.

Today the sign business continues to flourish with sales reaching the seven-digit mark.

The company also does vehicle wraps and graphics, while still continuing to offer hand painted and wood carved signs.

Reflecting on the past four decades, both men said they were proud to see how far the business has come and remained optimistic the business would only continue to thrive into the future.

“It makes me feel very proud that we were able to keep the business going that my mom and dad fought tooth and nail for and to get it to a point now where my parents can retire and I can be at the helm,” said Mike.