CANMORE – Local chef Patric Stettler is expanding his elderflower syrup business into a line of premixed sodas this year. The sodas are available locally at the Canmore Mountain Market on Thursdays, and through a handful of local retailers.
0
Jun 13, 2019 12:00 AM By: Aryn Toombs 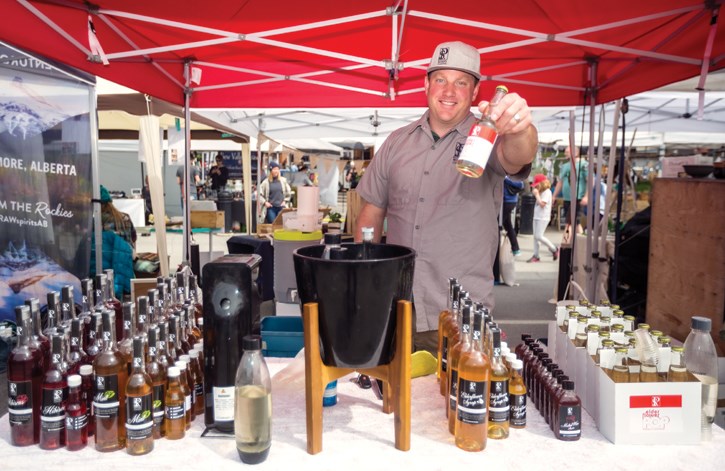 Chef Patric Stettler holds up one of his brand new elderflower pops at his PS Modern Cuisine market stall at the Canmore Mountain Market on Thursday (May 23). Stettler added the pop to his lineup of products to make his pre-existing elderflower syrup line more accessible to consumers.

CANMORE – Local chef Patric Stettler is expanding his elderflower syrup business into a line of premixed sodas this year.

The sodas are available locally at the Canmore Mountain Market on Thursdays, and through a handful of local retailers.

“You can just grab and go,” said Stettler.

The premium soda is bottled with the help of the Grizzly Paw Brewing Company in Canmore, using all of the same ingredients as the chef’s original syrup.

The pop has a fresh flowery flavour similar to 7Up or Sprite, but is less sweet. Samples are available at his market stall.

He said his experiences at the local farmers markets in Banff and Canmore over the previous season influenced his decision to create a product that was more accessible to consumers.

“I try and position myself in a boutique product position, of course that price point is sometimes out of the reach of people.”

He also said adding a soda to his lineup of locally made products made sense, because consumers are already familiar with premium soda pops.

“When [some] people see my syrup, they think it’s syrup like maple syrup over pancakes,” he said.

Stettler’s elderflower syrups are made to be mixed wine tonic water, wine, and other beverages.

Stettler made it a priority to have everything made in Canmore, and for him working with Grizzly Paw as a contract bottler made sense.

“They were gracious enough to take me on.”

Another goal for Stettler was to help spread the burgeoning Bow Valley beverage and cuisine scene beyond the valley.

He added dates in his calendar to be at the Millarville Farmers Market, Inglewood Night Market, Radium Farmers Market and the Bearspaw Market.

“It is great because I’m within that hour, hour and a half drive from Canmore, so for the people buying the products it feels like it’s local,” he said.

The bottles are selling for $5 each, six-packs for $25, and 24 packs are being sold at wholesale for prospective businesses.
For more information see Patric Stetler Modern Cuisine on Facebook at facebook.com/psmoderncusine.