KANANASKIS – After years of speculation, Fortress Mountain Ski Resort’s redevelopment plan has finally begun in earnest and if everything goes according to plan the resort could open by December 2020.
0
Feb 7, 2019 12:00 AM By: Paul Clarke 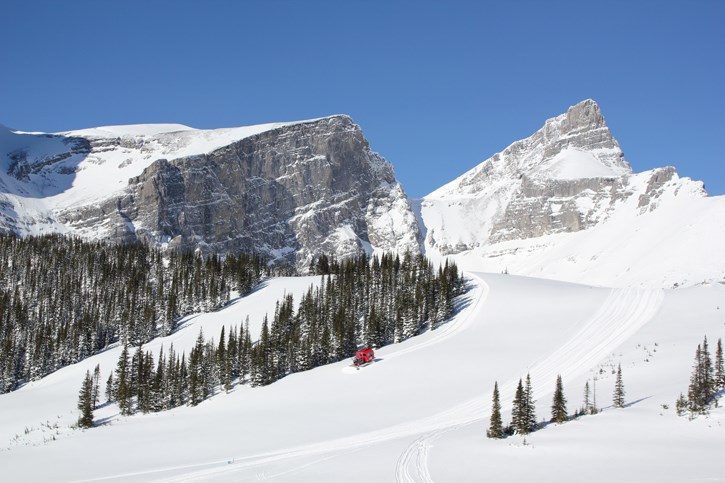 Phase one of Fortress Mountain Ski Resort includes five chairlifts and a magic carpet as well as a 36,000 square foot day lodge.

KANANASKIS – After years of speculation, Fortress Mountain Ski Resort’s redevelopment plan has finally begun in earnest and if everything goes according to plan the resort could open by December 2020.

Last spring the resort received approval from Alberta Environment and Parks (AEP) to replace its potable water system and refurbish a sewer line – a major milestone for the shuttered resort.

The company hopes to complete the $4 million project this spring and if given the green light from AEP, will begin construction on a new day lodge and lift system this summer.

“We’re excited, it’s been a long road, but shovels are in the ground and we’re moving forward,” said Chris Chevalier, president of Fortress Mountain.

Located 30 kilometres south of Nakiska Ski Area on Highway 40, the resort has been closed since 2004 – albeit with the exception of KPOW cat skiing that started operations at the abandoned resort in 2011.

Since then, the resort has quietly attracted private investors and brought on board Ecosign Mountain Resort Planners to create a master plan.

Phase one of that plan will make use of the resort’s existing ski terrain and refurbish or replace five chairlifts. Many of the lifts will also be realigned to improve the resort’s fall line for a total lift capacity of 2,500 skiers.

The first part of the plan includes building a 36,000 square foot day lodge at the base of the resort that will contain tickets, rentals, guest services, public washrooms, lockers, a ski school and a restaurant and bar. The resort will also install a magic carpet for beginners and create a tube park for winter enthusiasts.

“We want modern amenities, but with the touch of the old Fortress,” said Chevalier.

With a top elevation of 2,500 metres, the resort’s longest vertical run will be about 700 m when avalanche conditions permit, rivaling Sunshine Village’s Delirium Dive.

At full build-out, the resort will have nine lifts across three ridges allowing skiers and snowboarders to access 2,200 acres of skiable terrain.

The final phase of the master plan also envisions building a second base lodge, a mountain top restaurant, overnight accommodation for approximately 100 guests, employee housing and the potential for a Nordic ski facility, however this will largely depend on capital and skier demand.

While the final phase of the master plan looks promising, Chevy made it clear that Fortress has no intention of replicating mega resorts like Whistler, Sunshine Village or Lake Louise.

“The Red Mountains and the Whitewaters and the Castle Mountains, they’re special, and if we can do that, but with our own feel, then I think we’ll be successful,” said Chevalier.

Unlike other ski resorts that have failed to materialize such as Jumbo Glacier Resort in B.C., Fortress Mountain Ski Resort is making considerable progress thanks in large part because it was previously developed.

This has significantly cut the amount of capital needed to get the resort up and running with approximately $40 million of existing infrastructure already in place.

To fund the first phase of the resort’s redevelopment plan the company raised more than $5 million from private investors through the Alberta Investor Tax Credit program.

Launched in January 2017, the government-funded program offers investors a 30 per cent tax credit if they provide capital to small businesses in non-traditional sectors, such as technology, health and tourism.

“We were one of the first company’s to be given a check mark that were an eligible business,” said Andy Waddell, Fortress’s chief financial officer.

He said the tax credit has been a huge help because typically it’s a lot harder for ski resorts and golf courses to attract investment compared to other industries like the tech industry.

“They want to be part of a team and part of the excitement,” said Waddell.

As part of the company’s business plan, Waddell said the resort hopes to attract the hordes of skiers and snowboarders that typically head to British Columbia to ski.

“Fifty per cent of Albertan ski days are outside the province,” said Waddell. “That’s a huge number of skiers that leave Alberta to ski simply because Alberta’s ski hills are full.”

The company also hopes to attract new Canadians to the sport with its gentle ski runs at the base of the resort and its tube park. It also expects to see a lot of skiers return to the mountain where many people first learned how to ski.

The once bustling ski resort in Kananaskis Country has a long history dating back to 1967 when it was called the Snowridge family ski area.

In the 1970s, it was purchased by the Aspen Ski Company, which changed its name to Fortress Mountain to reflect the name of the rocky monolith that towers over the resort’s slopes.

In the 1990s, it was purchased by Resorts of the Canadian Rockies (RCR), which owns six resorts throughout North America, including Nakiska and Kicking Horse Mountain Resort.

For a brief period the resort seemed to experience a renaissance of sorts with Freestyle Alberta using it as a training centre, however with the lifts nearing the end of their life cycle and skier visits declining, RCR announced the closure of the ski area in April 2004.

The ski resort has not operated since.

In 2005, Banff Rail Co., purchased the resort, but its efforts to reopen it proved unsuccessful and in 2007 it was officially abandoned after the province withdrew the lease from the owner after it failed to fix an unsafe bridge, maintain the buildings and pay rent and taxes.

After laying dormant for three years, a new group of investors purchased the lease in 2010 and a year later began KPOW cat skiing with a single 14-passenger Pisten Bully.

The resort has also been used as a backdrop to some of Hollywood’s biggest blockbusters over the years including ‘Inception,’ ‘The Bourne Legacy’ and ‘Brokeback Mountain.’

Under new ownership the resort has hauled away dozens of truckloads of rubbish from the site and an inspection of the access bridge deemed it safe for travel. Fortis has also recently installed nearly 30 new power poles to supply the resort with commercial power.

While the next chapter of the resort looks promising, there is still a lot of work to do, however it appears the resort is on track to open by December 2020.