BANFF – Six months after Banff Convenience was devastated by an attempted ATM machine theft, its owners and employees are motivated and moving forward.
0
Mar 14, 2019 6:00 AM By: Jordan Small 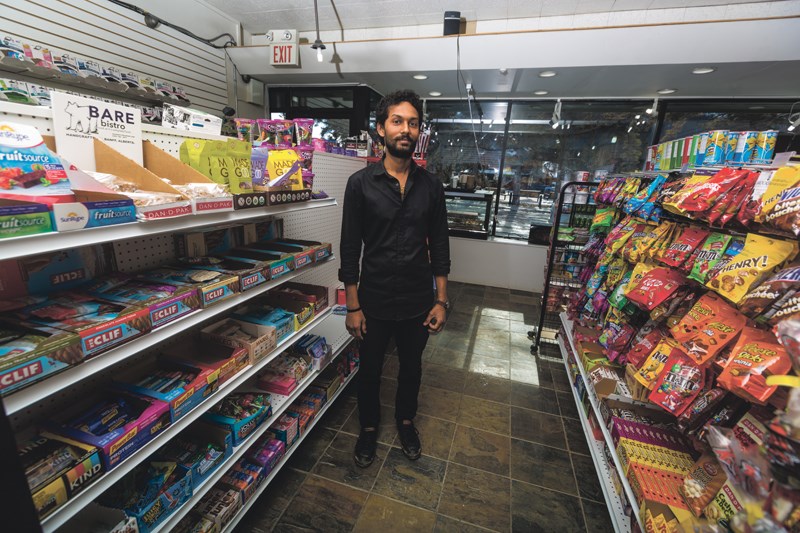 BANFF – Six months after Banff Convenience was devastated by an attempted ATM machine theft, its owners and employees are motivated and moving forward.

“We want to do business for the long-term,” said Rajendran.

The store’s racks are tidy and filled with product, customers are walking in, and there’s a smile on Rajendran’s face – something that was tough to pull off for a few weeks last year.

On Sept. 4, 2018, the Banff Convenience manager stood in the same spot he was on Monday, looking down at the broken and twisted mess at his feet.

Just before 5 a.m. that day, surveillance video captured a person parking a dark pick-up truck in front of Banff Convenience, then exiting the vehicle before shattering the store’s glass pane. As the alarm sounded, the masked and hooded suspect entered the premise and attached a chain around the ATM machine on the opposite side of the business.

With motorists driving past the ransacked business on Buffalo Street in the early morning, the suspect returned to the vehicle, and attempted to steal the machine by using the vehicle to pull the chains.

The robbery was unsuccessful, but the machine ripped through the store like a wrecking ball before stopping, causing thousands of dollars worth of electrical, piping, and product damage.

“The whole robbery [attempt] happened in under two minutes,” said Rajendran. “After we came inside, we didn’t know what to do … it caused about $92,000 total, damaged or lost in the robbery attempt.”

The suspect was only after the ATM machine and didn’t steal anything else. The Banff RCMP investigation is ongoing.

“We took 10-15 days and started slowly cleaning,” Rajendran said. “Some of the staff went unemployed while we’re still waiting on the insurance money to come.”

Initially, Rajendran suspected the shop would be closed only a few weeks, but it took nearly three and a half months before re-opening with limited products.

A lot of product had either expired, or was donated to the Banff Food Rescue in that time.

Rajendran is also part owner of Banff’s Mexican and Spanish restaurant El Toro, and focused on the restaurant in order to pay for the loss, he said.

“Things have been manageable,” he said. “We make profits just to pay rent so far, we expected this year to be OK.”

Half a year after the destruction, things are looking up for Banff Convenience with new product arriving over the past few months.

There’s a new collection of glass pipes being sold, and starting this week, Banff Convenience will be selling an Indian Box Lunch from noon to 3 p.m., seven days a week.

Made at El Toro, the lunch box includes vegan curry and rice or butter chicken and rice with each combo coming with a samosa, can of pop and bag of Indian chips for $14.99.

“We want to support the local community, because they supported us,” said Rajendran.