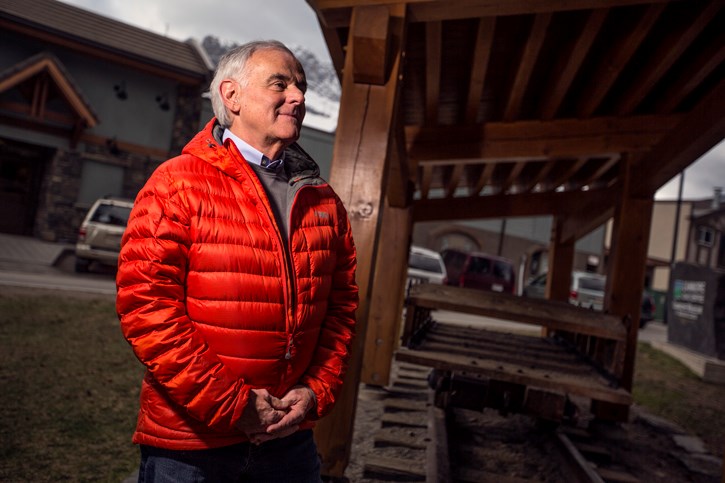 Innovate Canmore CEO Brian McClure at the Civic Centre in Canmore in April.

CANMORE - It takes a village to raise a $100 million business, or at least that’s Innovate Canmore CEO Brian McClure’s idea.

The year-old non-profit tech foundry is seeking to turn the local community of scientists, engineers and entrepreneurs into an agile force to nurture local business startups into multi-million dollar industry disruptors.

“It became apparent to us that this was a space where we could land quite well,” said McClure.

Using a set of strict criteria, Innovate Canmore is looking to avoid some of the potential problems and pitfalls that have plagued the tech startup industry in places like Silicon Valley or Montreal.

Among the criteria to be incubated, startups must have at least $100 million in potential market capitalization, must be a niche product with a high level of potential success and must also be an industry disruptor that is not mimicking, or can easily be mimicked by competitors.

During Innovate Canmore’s official launch in March at artsPlace, Chief Technology Officer Matthew Brown said while there are many stories in the media about highly successful tech firms, there is an underlying rate of failure in the tech sector that Innovate Canmore is trying to avoid.

“The part that you’re not seeing in the stories is that for every Google and Facebook that is successful there is something like 1,000 or 10,000 that are unsuccessful,” said Brown.

“We want a higher proportion of successful companies, hence the focus on niche products.”

McClure and the board decided to operate the tech inclubator as a non-profit as a result of the same market research that developed their criteria.

As a non-profit, Innovate Canmore has access to government grants and sources of funding that would be harder to access by the private sector, which in turn means the startups being nurtured do not have to enter into restrictive company share, or intellectual property agreements.

Companies that work within the Innovate Canmore framework have the opportunity to receive support from a diverse and talented network of professionals living in the Bow Valley.

“We decided there was probably great opportunity to take sectors that our community had an interest in, mobilize these individuals with PhDs and then pick projects,” said McClure.

Through a partnership with IBM, startups with Innovate Canmore can also receive up to $10,000 a month in access to IBM’s commerical software.

One of the early beneficiaries of this network of talent is Banff orthopaedic surgeon Mark Heard and his company DynaGenium.

Heard’s specialty, and his passion as he tells it, is in fixing damage to articular cartilage in knees.

Outside of live cartilage replacement, there are few options to repair damage.

“The big prosthesis corporations have a couple of crude solutions for this, but you can’t put them in young people,” he said.

DynaGenium is working towards utilizing the talents of Brown and other local artificial intelligence experts, alongside the metallics and nano-technology expertise of George Kim and others in 3D printing, robotics and imaging experts to custom-make and surgically implant custom prosthetics that are unique for every patient.

All of this talent already existed in the Bow Valley, drawn to live here because of the mountain lifestyle, but hadn’t connected before in a way that lead to projects like Heard’s.

“We got together and all of the sudden we’re on the verge of going forward with this huge project,” Heard said.

Currently the company is preparing to launch version four of a surgical button as a step towards manufacturing medical devices locally.

“I’m hoping to create surgical devices that we can use real time, and we’re not talking 20 years down the road, we’re talking within the next couple of years,” he said.

The end goal for McClure is to create real economic diversification into new sectors, like medical prosthetics, for the Bow Valley.

Innovate Canmore was created as a result of conversations in the valley similar to the ones McClure had with Heard and envisioned economic diversification through the high tech sector – conversations that have been ongoing in Canmore for more than 30 years.

“Because we were a regional chamber of commerce, we were looking for ways where we could place some emphasis on economic diversification, especially in areas where there was already a symbiotic relationship with the community,” said McClure.

Mayor John Borrowman sat on the Town of Canmore Economic Development Committee in the early 1990s. He also participated in the creation of the last tourism and economic development strategy for the community in 2010.

“Even then I was saying that we really should be trying to develop something in the tech sector, but at that time no one really knew what was going to happen,” said Borrowman.

“But then over the ensuing decades, more and more people were coming to Canmore and living here and able to work internationally because of the use of the Internet.”

Fast forward to early 2019, after support by the municipal government, Innovate Canmore was able to get access to Alberta’s Supernet, or high speed broadband, at the new Shops of Canmore for its startup space – without which there would have been no Innovate Canmore.

“That for us was a dealbreaker,” said McClure.

The ability for local startups to connect to artificial intelligence resources at the University of Alberta’s Amii – largely regarded as the third best AI research centre in the world – along with other resources, institutions and organizations, was essential to making tech startups happen.

McClure also noted that the tourism industry has a tangential role to play in helping to build the tech sector, observing that the mountain lifestyle has been attractive for the well educated and affluent.

“We did recognize that our tourism place here tees off that this is a generally desirable place to come,” he said.

But McClure said that the types of jobs that Innovate Canmore is trying to attract to Canmore are different than ones typically offered by the tourism industry.

“Whilst they generate jobs, they tend not to be high paying jobs,” he said.

“There is a disconnect in that we don’t have a very vibrant working middle class here. We got our doctors, dentists and Realtors, but in terms of critical mass we just don’t have it.”

For McClure, the tech startups offer something different for residents, and for the way capital moves to and away from the valley.

His aim is to help create businesses that keep capital and ownership in the Bow Valley, rather than having that income flow to centres like Calgary and Edmonton, and to contribute toward a solid middle class demographic.

“Any economy, whether its Canmore or the United States of America, has to have a vibrant working middle class to sustain and survive and prosper,” he said.

Municipal support has come because of the potential opportunities created by Innovate Canmore, but like them, the Town is looking broadly and long term at economic growth.

“We need to do what we can to encourage and support growth across many sectors, tourism obviously, the tech sector, but also the others like arts related activity,” said Borrowman.