CANMORE – Soon your Bow Valley burger will be topped with fresh locally grown butterhead lettuce courtesy of the Lettuce Lads.
0
Apr 11, 2019 12:00 AM By: Aryn Toombs 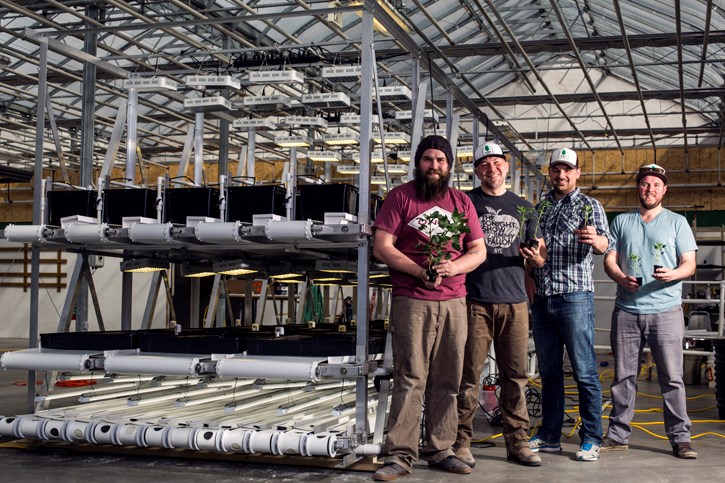 The Lettuce Lads show off their demonstration version of a high-volume, high-density hydroponics growing system at the Canmore Greenhouse on Saturday (April 6).

CANMORE – Soon your Bow Valley burger will be topped with fresh locally grown butterhead lettuce courtesy of the Lettuce Lads.

Crisp and nutritious greens aside, customers will be tasting the results of a giant leap in hydroponic agriculture technology.

For the past year, the Lettuce Lads have been developing patented technology that promises growth rates in excess of 200 per cent of traditional hydroponics and greenhouse techniques, while requiring significantly less electricity, water and labour.

“What we’re trying to prove here is that we can grow more for less,” said Lettuce Lads co-founder Caleb Allen.

Currently in the demonstration stage, leafy greens are grown in a multi-tiered belted system where optimal amounts of light and water are provided to the plants.

“Most hydroponic operations aren’t profitable because they have very high utility costs, high labour costs and that results from a low density setup,” said Allen.

The density of plant growth is what sets the Lettuce Lads system apart from other shipping container and greenhouse systems.

Our system can grow 246 per cent more grams per square foot than our competition,” he said.

The Lettuce Lads also said they are able to get 518 per cent more grams per kilowatt hour of power used than other systems.

The end goal they say is that they can drive down the cost of production for growers, resulting in savings for consumers as well.

“You can already buy hydroponically grown lettuce right now at Save-on-Foods – it’s like $4.50, $5 a head – so we’re going to have that quality or higher, and we’re going to reduce the cost and make it more accessible across the country,” said Matt Howlett, head of marketing and communications for the Lettuce Lads.

Provincially the greenhouse industry has seen flat growth since 2015, with a peak of 188 business province wide in that year, decreasing to 174 in 2017 and rising to 186 at the end of 2018 according to Statistics Canada.

During the same period, the consumer price index commodity price of energy rose sharply to a peak in January 2018 of 164.3 before declining to
159.6 in December.

Energy costs have a direct impact on the profitability of greenhouses because of the size of the growing spaces and way that those environments are heated.

The Lettuce Lads system does away with what they call “competition with the environment,” reducing energy costs by creating a small dense environmentally controlled space.

“If they use our technology in their existing systems they’ll be able to grow more efficiently and be able to grow year round because we’re driving up the output while driving down the utility costs,” said Allen.

Reducing labour costs is also a result of the belted system that moves plants through the multi-tiered growing space to where the farmer is located, instead of the farmer having to go to the plant.

“A farmer with traditional hydroponics would have to go into the container, sometimes have to use a stepladder in order to reach something higher up. He’s going to have to take a tray off, sometimes a 10 to 20 foot tray of produce out and put it on a worktable in order to harvest it.”

The Lettuce Lads say their system does not require the use of worktables.

“The farmer can more or less do all of their work without having to move,” said Allen. “This is plug and play. You drop the plant in and you pull the plant out.”

The end result of lower production costs is equal access to good quality food without wastage.

The next stage of development for the system is a custom-designed sensor package and the use of artificial intelligence in tracking plant growth.

The lads have connected with a horticulturalist in the United States and engineers from NEDlabs in Edmonton to build a sensor system to track microclimates throughout the growth space.

“If you imagine a shipping container, the bottom left versus the top right on the other side is going to have different humidity, different temperatures and different issues, so we want to be able to avoid that and know its coming before it happens and make sure the farmers and producers are aware of these issues and are able to fix those issues,” said Howlett.

Knowing what is being grown also means that farmers can grow the right amount of product to meet market demand, without having to worry as much about product loss.

“We want in the long run to plug [the farmer] into our overall system of saying ‘hey, this grocery store needs this amount at this time, we know you’re going to hit this amount,’ ” he said.

“We know that we can help him or her sell that.”

Current container technology has space for approximately 1,800 growing spots, whereas the demonstration Lettuce Lads system has space for
.3,500 with the eventual goal of 5,000 within a 40 foot by 9 standard space.

The current setup at their temporary lease at the Canmore Greenhouse is just over 30 feet.

For now the focus is on the production of leafy greens, with the possibility of looking at multi harvest plants like peppers and tomatoes in the future.

“We started with a rex butterhead lettuce, which is a burger lettuce, because we knew that a lot of the restaurants and the grocers around here have high demand for it,” said Howlett.

“We’ve already got letters of intent from several of those folks,” he said.

The Lettuce Lads are inviting the public to their launch at the Canmore Greenhouse located at 60 Lincoln Park on April 23 from 5 pm to 9 pm.

A short presentation and discussion about the future of hydroponic growing in the Bow Valley will take place at 7:30.

Go to www.lettucelads.co for more information.