CANMORE – A local yoga teacher and studio owner is stretching his way into a brand new business venture – co-owning and operating a craft T-shirt print shop.
Jan 10, 2019 12:00 AM By: Tanya Foubert 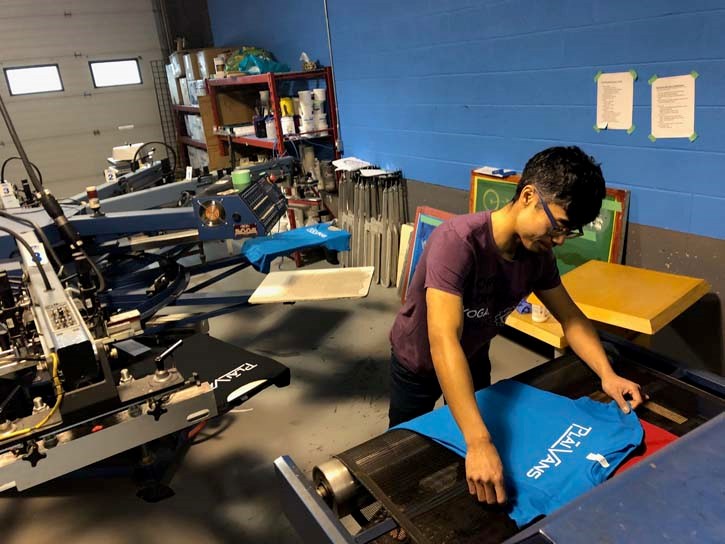 CANMORE – A local yoga teacher and studio owner is stretching his way into a brand new business venture – co-owning and operating a craft T-shirt print shop.

If you’ve ever taken a yoga class with Jeff Mah at the Yoga Lounge, which he has co-owned since 2012, you know how enthusiastic he is when it comes to your downward dog.

Now Mah is directing some of his creative energy toward a new venture – Canmore Shirtsmiths – a locally owned and operated commercial T-shirt printing company – with partner Robert Sternloff.

“It is interesting because as the owner of the Yoga Lounge years ago I wanted to get some T-shirts for the studio and I couldn’t find any silk screeners in town that worked at a price point that makes sense,” Mah said. “So that first batch of shirts went out of town.”

Fast forward to 2016 and the final Tragically Hip cross-Canada tour was underway after lead singer Gord Downie revealed he had incurable brain cancer. Local efforts coalesced to host an event for the commercial-free live broadcast of a Hip concert by CBC – a commemorative T-shirt was needed for the Canmore event.

“I walked in and I had never seen this place before,” Mah said. “It was a full-on, high volume production facility – I was totally blown away and that was how I met Rob.”

The meeting of the minds between the two eventually led to a business partnership and Canmore Shirtsmiths was born in July.

It was great timing for Sternloff, who finds himself with many different ventures on the go at any time. The longtime Canmore local used to own Frozen Ocean on Main Street and last year opened up Canmore General Store on Sixth Avenue.

“The opportunity presented itself and I jumped on it,” Sternloff said. “Canmore is a busy place, there is a lot of attraction to (the community) … and a vibrant collection of businesses downtown.

“I thought it would be fun (to own a clothing store) again.”

It was also the perfect fit for Mah, who used to silk screen T-shirts in high school and has an engineering degree with a minor in manufacturing. After 18 years of rewarding work with people as a yoga teacher, he said he was excited to get back to making stuff with his hands.

“I looked at it and thought this is a business that has great potential,” he said.

For Mah, the new business has allowed him to connect with local businesses and people in the Bow Valley looking for event or commercial custom clothing. He said he is grateful for the new relationships that have formed as a result of the business venture.

“We print for a lot of small businesses in town and we are trying to work with bigger groups like Rocky Mountain Soap and other event organizers,” he said. “It is very rewarding to help businesses in the Bow Valley rather than having them outsource or do it online … and when we aren’t printing other people’s stuff, we hit the creativity board and print our own.”