CANMORE – You hear it a lot these days, Canmore has changed. If you’ve lived in the community for any period of time over the past four decades that is certainly true, but at the same time there are many things that have stayed the same.
0
Oct 11, 2018 12:00 AM By: Tanya Foubert 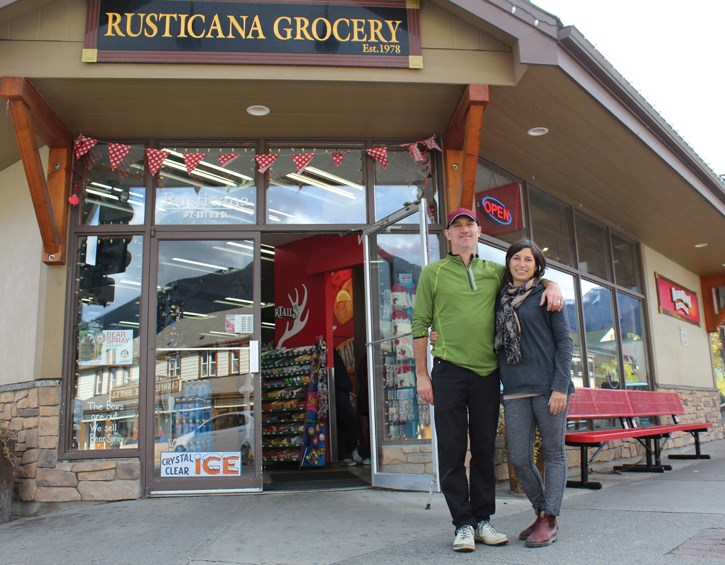 Jason and Christine de Soto bought Rusticana Grocery in 2013 and have been expanding what the convenience store offers ever since. Wtih a focus on organic and local products, the addition of a liquor store and Beavertails, the family-owned business in the heart of the downtown core has evolved over the past five years.

CANMORE – You hear it a lot these days, Canmore has changed.

If you’ve lived in the community for any period of time over the past four decades that is certainly true, but at the same time there are many things that have stayed the same.

Like Rusticana Grocery on the corner of Main Street and Seventh Avenue in the heart of Canmore, one of the longest standing businesses in the downtown of the community.

Of course, Rusticana itself has changed over time, like in 2013 when Christine and Jason de Soto purchased the business from Linda Cooper, who had owned it since the early ‘90s.

“In the beginning, it was where everybody used to come and meet,” Cooper said in an interview with the Outlook. “Everyone came downtown to get the mail (at the post office) and chatted. The kids from the school used to come in.”

“As time went by … Canmore changed and it wasn’t really a small town anymore … costs went up and it was harder to get staff.”

The business originally opened in 1978 by local Noldi Kaech at the corner of Main Street and Eighth Avenue where the Wood restaurant is currently located (a.k.a. the Sherwood House back in the day). It was sold to Terry and Dick Wales and moved into its current location by 1982 in the heart of the downtown core.

In 1992, Calgary company Elmwood Construction purchased the business and two years later sold it to Cooper and her business partners Terry and Laura Lee Shelley.

“I miss those days,” Cooper said. “It was very much a hub and like everyone was part of a family. I miss the camaraderie and the people.”

But she said there came a time when she realized she wasn’t a “spring chicken” anymore and it was time for a change.

Meanwhile, the de Sotos were also looking for their next big business adventure in the Bow Valley with Christine working as a mortgage broker and Jason having sold his restaurant Bruno’s Bar and Grill in Banff.

“We were kind of in limbo there for a bit and this opportunity came up,” Christine said. “It was great. It was an amazing opportunity and they were ready to pass the torch.”

Having owned Huckleberry Health Foods in Canmore for a decade, the de Sotos were already familiar with the health food industry and running a store and it had been a dream for Christine to own a grocery store.

While she credits her husband for the entrepreneurial drive, Christine has been the catalyst behind how the Rusticana Grocery’s product offerings have changed over the past five years.

Jason said Rusticana was very much a convenience store when they took over, and they have taken the time to focus more on the grocery side of things, brining in fresh organic produce, Mans Eggs, and locally made products from companies like Valbellas,
JK Bakery, Rocky Mountain Flatbread, Canmore Pasta and Mad Dog Café curries.

“It has been fun,” Jason said. “We are really excited to bring back the grocery side.”

The changes were also structural, with the addition of a liquor store, new shelving and the opening of the Beavertails franchise as well. But they’re not done yet, with plans in the works to remove the pop fridges and install new open display coolers instead.

Rusticana even had a starring role in the live Rogers Hometown Hockey broadcast this past winter. Ron MacLean and Tara Sloane hosted a live broadcast right in front of the storefront on Canmore’s Main Street. It was a thrill for the de Sotos, and symbolized how Rusticana remains at the heart of the community in many ways.

From Cuban cigars and organic kale to your favourite chocolate bar or imported Italian groceries from Scarpone Foods – all in the community’s favourite corner store.

Rusticana remains a buzz of activity and a hub for the community even with all the changes Canmore has seen over the past 40 years.

“They have really done a wonderful job,” Cooper said, reflecting on how the store has changed since she sold it. “They have really gone a different way, but in order to stay in business you have to stay with the times and the demand.

“Canmore has changed so much, and in some ways Canmore hasn’t changed … I think Rusticana can be there for along time because they fit a niche for downtown Canmore. They have done well to make it work and it is heart-warming to see it.”