CANMORE – Excitement is building as businesses in the new commercial development The Shops of Canmore prepare to open their doors to the public over the next couple months.
0
Feb 14, 2019 12:00 AM By: Tanya Foubert 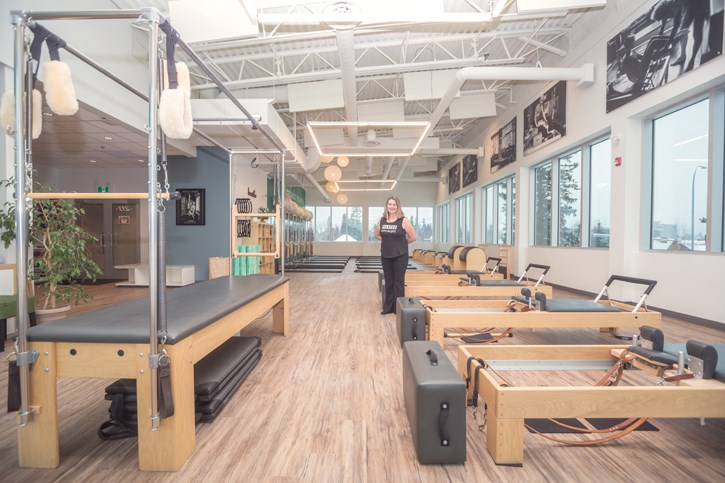 Embody Pilates studio owner and teacher Bonny-Lynn Russell stands in her new studio space now open in the Shops of Canmore at the corner of Bow Valley Trail and Benchlands Trail on Tuesday (Feb. 12).

CANMORE – Excitement is building as businesses in the new commercial development The Shops of Canmore prepare to open their doors to the public over the next couple months.

The 65,000 square-foot commercial development at the corner of Bow Valley Trail and Benchlands Trail in Canmore has been the talk of the town ever since developer Neil Tanner cleared the site of trees to break ground last year.

Located at one of the busiest intersections in the community, many underestimated the size of the property, but as the new businesses working to open their doors this spring can tell you, the commercial space was exactly what they were looking for.

Terry Jensen and his wife Laurie have been looking for a location they liked to open their new restaurant and wine bar The Sensory for several years before they found this project.

“We were waiting for the right location to do this venture and the Shops of Canmore are amazing, I am really excited about it,” Jensen said. “I always in the back of my mind wanted to do this and decided now was the time.”

With two levels and 5,500 square feet of space, including patios overlooking the Three Sisters, Jensen is excited to be at the stage where Chef Tracy Little is ready to begin cooking. Having owned the Canmore and Banff McDonalds franchises since 2005 until they sold them a few years ago, the Jensens are keen to begin the next chapter for them.

Embody Pilates owner Bonny-Lynn Russell was in the same situation – looking for space to expand her business teaching Pilates to students and training teachers.

Russell said the opportunity to design her dream studio in the Shops of Canmore that includes all the elements she would like, including physiotherapy and massage therapy options, was an opportunity she couldn’t pass up.

“Our whole mandate is to help people move well,” she said. “It doesn’t matter if you are recovering from injury, an elite athlete, or somewhere in-between, we can help you move well.

“With this new move, we can design a space set up for that.”

“We are really excited to partner with other businesses,” Russell said.

Embody has already opened its studio, as has the offices for H&R Block. Other businesses still have to complete their interiors before they can open.

Freshii franchise owners Ishan Aggarwal and Priya Verma were having tiles installed for their new business when the Shops of Canmore held an open house in January.

Calgary residents and engineers by trade, Aggarwal said they have been searching for commercial space in Canmore specifically to start their business.

“We felt the fast food health aspect fits into this town and that is why we wanted to bring Freshii to Canmore,” he said. “I think it is a very young brand.”

Dawn Donald with Mad Dog Café is a familiar face from the weekly Mountain Market in Canmore each summer. Along with her husband Russell, they have operated a curry restaurant and dog sled tours out of a Dead Man’s Flats commercial location for the past seven years.

She said they were thinking about what direction to take into the future knowing their lease was ending this year, when a curry buffet regular and architect on the project tipped them to the Shops project.

“We started looking at it and we weren’t ready for any commitments at the time, but it looked like the right location for us,” Donald said. “Now we are looking to hopefully be open at the end of April if everything goes according to plan.”

For Tanner, it is a busy and exciting time getting tenants into their commercial leases and finishing phase one of the project.

Other than a hotel like Malcolm which recently opened its doors and a grocery store, the Shops of Canmore represents the single largest square foot commercial development in the community’s history.

Tanner said the key to success for him as a developer of commercial retail and office space is doing what he can to ensure the success of his tenants. When the opportunity came along to purchase the 2.5 acre lot in a high traffic location, he went for it and is excited to see it reach this point.

“The initial design concept was to not build a big massive building,” he said.

“It was to break it up into smaller buildings with lots of points of access between them, people places and have more of a village feel.”

Tanner, who owns a building on Main Street and Railway Ave. already as Tanner Developments, didn’t want to compete with the downtown, but augment what is available to residents and visitors in the community.

“Through good planning we can keep a good balance between the downtown and Bow Valley Trail,” he said. “The small square footage retail bay is a passion of mine because I started out with a small retail store.

“I am very proud and very careful with my choices of tenants and I am always looking in the long term and to supply a properly sized, well managed product for them to be successful in.”