Hundreds of worms working tirelessly to turn organic food scraps from the course into workable, useable soil make up its vermicomposting system – a system that is working beautifully after a full year running.
Sep 12, 2019 6:58 AM By: Alana MacLeod 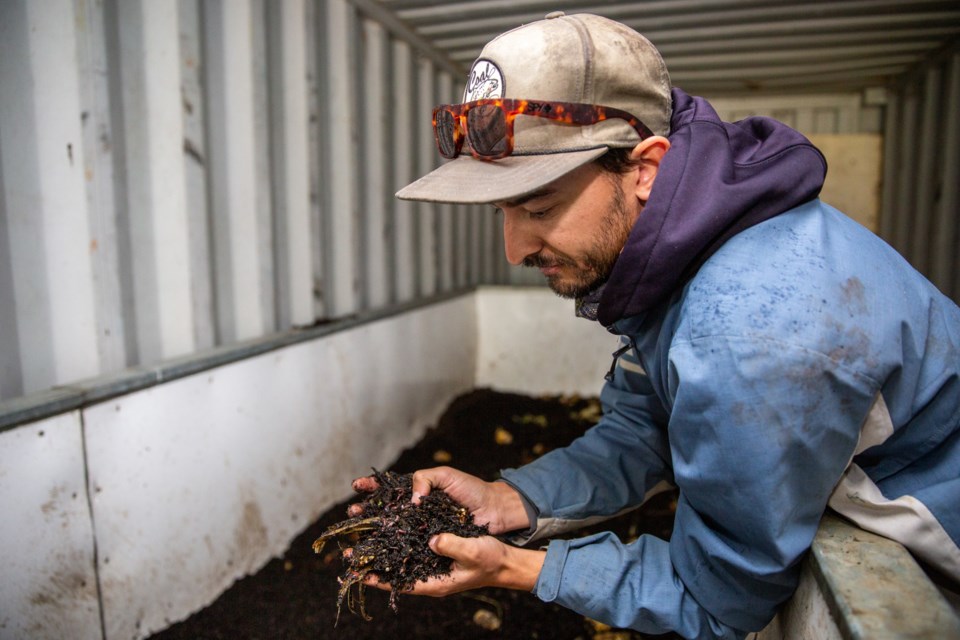 CANMORE – At first glance, the shipping container behind the scenes at the Canmore Golf and Curling Club seems a little out of place, but within its metal walls lies a unique composting system.

Hundreds of worms working tirelessly to turn organic waste from the course into workable, useable soil, make up its vermicomposting system – a system that is working beautifully after a full year running. 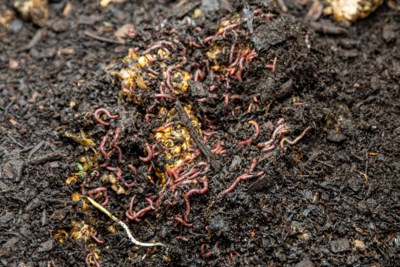 “We were hesitant at first, but now we have a process and it’s working pretty well,” said Reid Solodan, the course superintendent.

“What we’ve noticed with the divots we fill in [with the soil], this creates a little darkness and some heat from the sun, we find the seeds germinate quicker too. There are nutrients in there helping it along.”

The system itself looks like an open bin filled with soil, food scraps and worms, complete with a mechanism at the bottom that, when used, causes the ready soil to drop to the floor. Solodan said the course started with 200 worms that have since multiplied, and using his hand to push around the soil, hundreds of worms could be seen doing their job. Essentially they eat the food scraps creating “basically worm poop,” Solodan explained with a laugh. That "worm poop" is extremely nutrient rich soil.

From there, employees like Pete Dall, assistant supervisor at the course, take the soil and use a double sifter to ensure its course ready and no large pieces remain. It’s then piled beside the container until it’s needed on the course. Around every second day, Dall will collect organic food waste from the kitchen at the clubhouse and bring it back to the container. It’s dropped into the bin in increments and the worms do the rest. 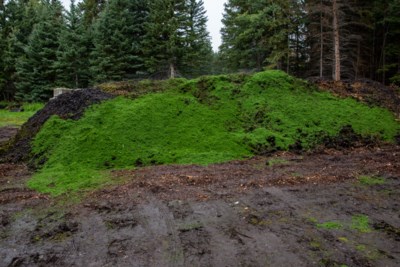 A pile of soil created from Canmore's Golf and Curling Club's vermicomposting system. EVAN BUHLER RMO PHOTO
“It’s satisfying to see [the] results, it’s a long wait – it’s been a year since we started throwing stuff in that bin,” said Dall, pointing to a pile of ready-to-use soil with blankets of a beautiful, crisp green growth.

“To get this out of here is relatively new within the last month or two – to have a product we can use. We’ve put it elsewhere on the course … You see what grows in it – it works. Whatever comes out of it turns real green.”

The concept itself came to Solodan and his team from local vermicomposting specialist and urban farmer Christian Wright back in 2015. Wright presented the concept he wanted to establish at the course at a talk held by the Canmore Community Gardening Society. Now, years later, it’s a fully working system.

“To see it physically here after we’ve worked on it for a number of years is exciting and based on what Reid’s told me, what they’ve saved in trucking costs is something,” said Wright.

Solodan said the system as a whole cost the golf course roughly $10,000 and in only a year, they’ve already saved more than that in trucking costs. Wright said this is exactly why the system works. 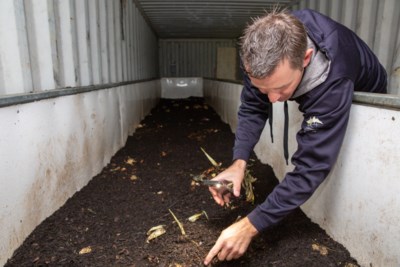 Reid Solodan, Canmore's Golf and Curling Club course superintendent shows off the vermicomposting system that sees all organic food waste turned into workable, useable soil. EVAN BUHLER RMO PHOTO.
for the golf course and I’m hoping that some people down at the Town will take notice of it and realize that we have organics diversion in town now,” he said.

Just last week, the Town of Canmore officially launched its new pilot composting system that will see the community's organic waste shipped 26 km to the west in Banff. From there, both Banff and Canmore’s organic food waste will then be shipped to Strathmore, Alta. For Wright, starting a vermicomposting system here in town just make sense.

“Its only going to be more and more feasible as the years go by, fossil fuel gases are not getting cheaper, trucking costs aren’t getting cheaper so making the investment now would be prudent in my opinion,” he said.

“When you can get those microorganisms around your plant root systems, there’s just so many ecosystem services that they provide for you as a grower, whether you’re doing turf or vegetables, like myself. It just makes too much sense to be throwing away, to not take advantage of it. People call it waste, I call it an opportunity.”

Meanwhile, as summer comes to an end and the golf course gears up for winter, the worms are not forgotten.

“The winter was a big thing in terms of keeping these guys alive – we figured out a process where we would do heat tape basically and then insulated tarps on top and we kept them going throughout the winter,” said Solodan, adding the container does have power to it.

Dall said the combination of the heat tape and tarps keeps the temperature around 15 C, enough for the worms to keep working, albeit maybe a little slower. As for the product itself, both Solodan and Dall said having too much isn’t an issue.

“We’ve got construction lots of the times and we can put it places that fill in big areas that need to be leveled out, we’ve got it in two spots now out there that we throw quite a lot in there and that stuff that does grow in it is awesome … The grass grows nice and long, seems to love it,” said Dall.

For more information on Canmore’s Golf and Curling Club, visit its website at www.canmoregolf.net.