Above average snowpack levels in front ranges of Rocky Mountains

"We had a pretty decent snow year in Canmore this year, not a lot of melting through chinooks and the snowpack has stayed with us."
0
Apr 29, 2020 12:00 PM By: Tanya Foubert 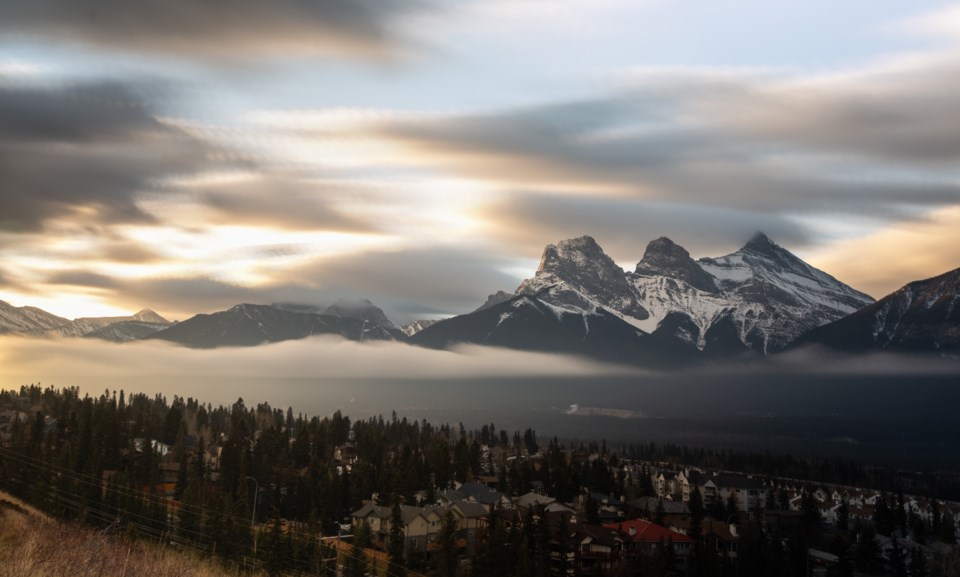 BOW VALLEY – With warmer weather throughout the Rocky Mountains, experts and municipal officials are keeping an eye on snowpack levels and weather forecasts as well as their potential effects on the Bow Valley's waterways.

With a network of 35 high-elevation weather stations across the Rocky Mountains – from the Athabasca Glacier to the top of Fortress Mountain – director of the Canmore-based University of Saskatchewan's Cold Water Laboratory John Pomeroy said Monday (April 27) that snowpack levels in the front ranges are currently above average.

"When you see a lot of snow on the mountains around Canmore, that is reflecting those high front range snowpacks," Pomeroy said.

He pointed to the average snowpack at the Skoki Lodge weather station at the end of April is approximately 320 millimetres and currently it is reading a level of 425 mm. At Little Elbow summit in Kananskis Country this time of year averages a snowpack level of 375 mm, but is currently reading 520 mm.

"It is well above normal and has not started to melt at all," Pomeroy said. "[Data] suggest that the front ranges at high elevations are really loaded up with snow."

He added weather stations further into the Rockies show levels closer to average for this time of year. Three Isle Lake in K-country, for example, has a current snowpack level of 500 mm and at Sunshine Village, the level is slightly above normal.

Pomeroy said there are still a few more weeks of colder weather expected at higher elevations and the Bow Valley typically sees snowmelt levels rise in May and June.

The Town of Canmore has a weather station along Cougar Creek that provides hourly data and engineer Felix Camire said the municipality has "a good idea of what is happening up there."

Data from the station only dates back to 2016, but he said the snowpack is "a bit above" where it has been over the past four years.

"Last week we had a decent melt," Camire added. "And this week we are expecting the same thing."

The snowpack within the Bow River watershed, he said, is between 105 to 140 per cent of the historical average based on the data available through Alberta Environment.

As the weather warms and the snowpack melts, Camire said the river is affected and can fluctuate in depth and flow rate. The river in turn affects groundwater levels in the valley bottom.

"Right now the groundwater is slightly above average," he said. "We had a pretty decent snow year in Canmore this year, not a lot of melting through chinooks and the snowpack has stayed with us."

When it comes to the risk of the Bow River or mountain creeks flooding, like what occurred in 2013, Pomeroy said the biggest risk comes from heavy rainfall.

"The snowmelt itself almost never has caused flooding on the Bow River," he said. "[The flood in] 2013 was largely driven by rainfall, but there was a snowpack that held on quite late in the year due to a cold spring."

As spring progresses, researchers and officials with the province and municipality will continue to watch the snowpack levels in combination with weather forecasts. The Town of Canmore offers a weekly seasonal high water monitoring bulletins. As of Monday (April 27), there were no concerns.

For Pomeroy, while he is able to continue monitoring his system of weather stations, some are currently no longer reporting up-to-date information and his team was unable to access them and fix whatever problem is occurring. That was because of restrictions on field work for post-secondary institutions.

"When you take a look at those right now, unfortunately you will see that some of the stations are out of date," he said. "That is because we have not been able to go up and visit them since around March 13."

Pomeroy received confirmation that as of Wednesday (April 29), researchers would be able to go back into the field to continue their work and fix those weather stations that are no longer reporting data.

The Cold Water Lab in Canmore researches water supply in general, including changes to snowpack and timing of snowmelt each year. The data collected forms an archive that can be used to model trends, predict water supply in terms of floods and droughts, as well as anticipate extreme events like the 2013 flood.

"We learned in the 2013 flood that the data we collect can be useful for others," Pomeroy said.

"At this time of year, we would be out there very busy taking snow surveys – where we manually measure the depth and density of snow over a long transect – so we do not just have the observation points."

The 2013 flood, which saw mountain creeks in the Bow Valley swell with debris flows, saw significant rainfall that fell on a late snowpack that year due to a cold spring season.

It is that relationship between the snowpack and rain events that is a focus of Pomeroy's field work and research. He said knowing the snowpack has a "tremendous impact" on the ability to model and forecast streamflow.

"That is why we are still very much interested in improving our understanding of how snow develops in the Rockies and how quickly it melts," he said.