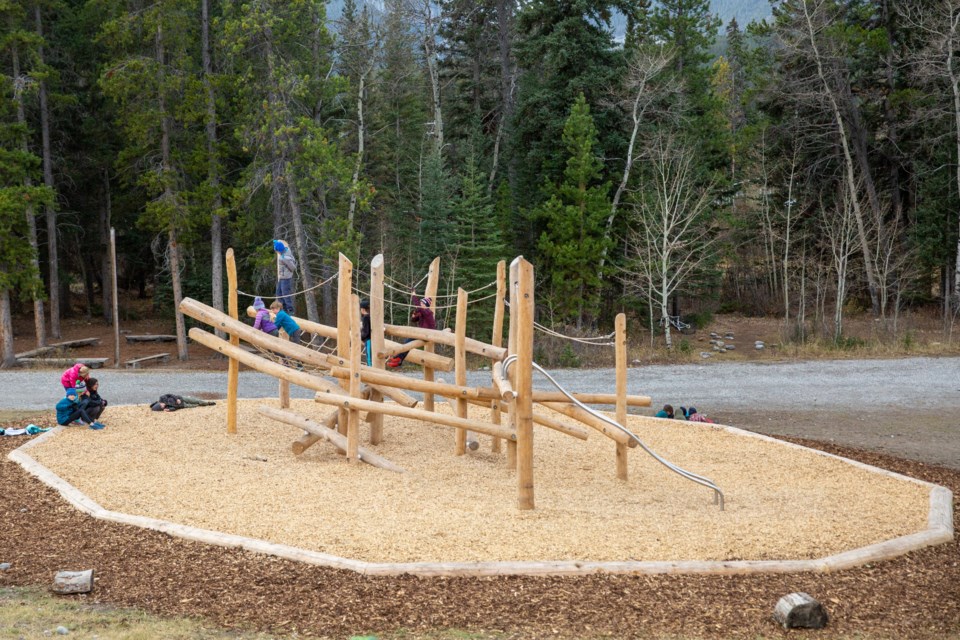 The new Alpenglow School natural playground. The school was awarded $125,000 by the provincial government to create an outdoor learning centre as well. Evan Buhler RMO PHOTO

CANMORE – A local elementary school is swinging from the ropes this week after it received a $125,000 provincial grant.

Alpenglow School in Canmore has been awarded a Community Facility Enhancement Program (CFEP) grant to be used for an outdoor learning centre.

“[It] kind of blew our socks off,” said Jolene Gunn, the director of fundraising for the Alpenglow Community Education Society.

“With the CFEP grant we have plans for construction in July for an outdoor classroom learning space.”

Gunn said a group of parents previously worked to raise $75,000, which was used for the current play structure added to Alpenglow School, which operates out of Canmore Collegiate High School.

“We spent the $75,000 of [the] initial fundraising amount to get the play structure that we built this August,” said Gunn. “It’s all natural logs, ropes … very unique within the Town of Canmore. It really encourages [children] to play in a way that isn’t dictated to them.”

Gunn explained the students she sees using the structure play in innovative and creative ways, which is what the school hopes to promote.

“We’re trying to think of this as a way [for students] to challenge themselves physically and to use the space in a creative way,” she said.

“Kids can learn creative, social dynamic play that doesn’t only build physical literacy skills, but also builds self management, self regulation, connectivity to nature – that a play structure in a play area like this will encourage.”

With the CFEP grant, Gunn said the details are still being worked out, but the plan is for an outdoor learning space. She said right now the thoughts are to build a space with a slide in the ground using a natural slope, as well as the addition of “loose parts play,” which Gunn describes as a number of items children can use to build, create and play with such as tires, logs, or mallets.

“What kids can do with that – they could build a house, they could made an outdoor kitchen, they could pretend to do this huge variety of things,” she said.

“It allows them to create and be social with one another with whatever they decide to do with [the objects].”

The long-term goal is that the spaces and structures added to Alpenglow School could be used as a way to connect community as well.

“The other party of this that’s really beautiful is it’s a great opportunity for community – it can use the space, too,” said Gunn.

Gunn said she and her team at Alpenglow School have so many in the community to thank.

“Our parent community being able to fundraise is huge. We’ve had tons of donations and support from local businesses … we couldn’t have done it without all of the supports,” she said.

The CFEP grant is a government of Alberta grant that goes towards local community facility enhancements. According to the Alberta business grants website, it has been “established to assist in fostering the unique characteristics of Alberta’s many communities.”