Banff, Canmore put aside rivalry for ultimate Walk A Mile In Her Shoes fundraising initiative 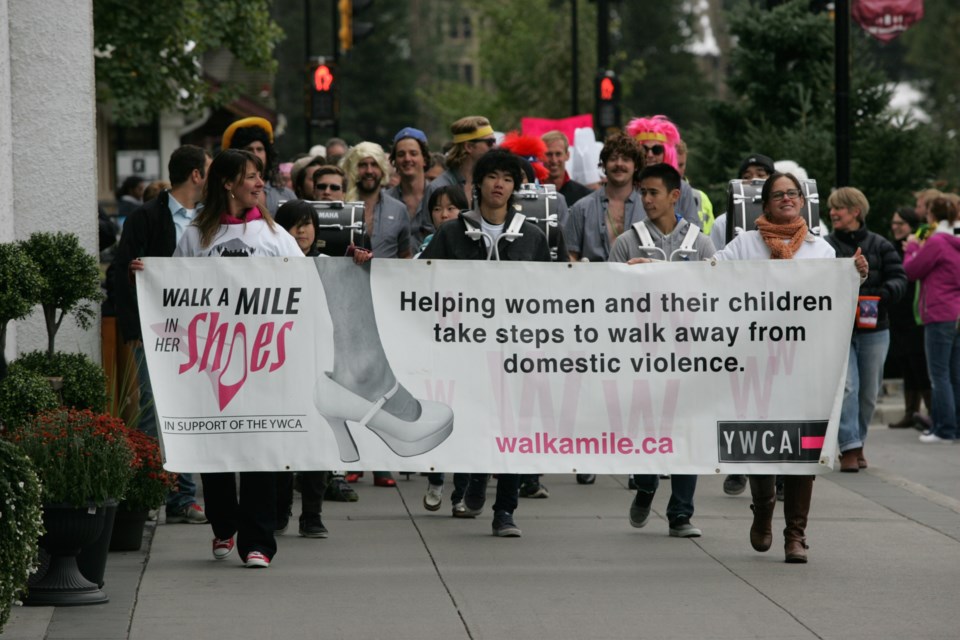 BOW VALLEY – A long-standing tradition between Canmore and Banff mayors to compete for funds during the annual Walk A Mile in Her Shoes event has been put aside for the ultimate display of unity for the cause.

Mayors Karen Sorensen, Banff, and John Borrowman, Canmore, have said they want to send a stronger message to the communities, hoping to further engage residents in the cause.

“The fun rivalry that we created was always intended to help spur on the funding contributions and hopefully our changed approach will help to bring renewed attention to the need,” said Borrowman.

Sorensen said the decision comes with the concept that the two municipalities are often seen working together, like the recent composting pilot that will see both Towns' waste shipped together. The two mayors decided the communities could do better working as one.

“Banff and Canmore do a lot together and it was actually this event several years ago we coined the phrase 'two towns, one community,' ” she said.

"We are two towns, but we are one community."

The annual Walk-a-Mile in Her Shoes, put on by YWCA Banff, was initially an international march intended for men only, traditionally wearing high heels, to raise awareness of the issues of sexual assault and gender-based violence. However, Carla Snow, manager of marketing and communications for the YWCA, as well as an organizer for the walk, said any gender identification is welcome to join in on the cause.

“As time has gone on, we’ve seen the need to be inclusive and opening it up to all genders we felt was the right way to do that,” said Snow.

“We invite all genders, ages and abilities to participate. The walk used to originally be for men, but a few years ago we opened it up to everyone and we would love to see everyone come down and participate.”

In fact, the Bow Valley walk has broadened its horizons to make high heels, a trademark of the walk in past years, optional.

“Folks often ask us about the high heels, which for a very long time were a symbol of the walk a mile, and high heels will be available for those who want to wear them, but we also invite people to wear whatever shoes they're most comfortable in. It’s not mandatory to wear the heels.” Kael MacLeod, left, and Logan Bry and do their best to make the finish line in high heels, doing their part to raise money for the Bow Valley Walk-a-Mile fundraiser in Canmore in 2017. RMO FILE PHOTO
Heels have been ditched in many places across the country and the United States, with Colombia University, an Ivy League school, attempting to cancel it entirely in 2017 after campus members called it “insensitive” and “transphobic,” according to a report by The College Fix.

However, here in the Bow Valley, creating awareness around violence prevention and the supports offered here, as well as inclusivitiy, are paramount to its cause.

“I have seen a great increase in community awareness, which I think is really important, that every year there’s more and more people coming on board,” Snow said.

A Year in Review:

The YWCA engages the community in a multitude of violence and prevention programs including the violence prevention and health relationships program, school and community programs and the women circle program, to name a few.

In its annual report, the YWCA notes that in the last year, it has been able to support 77 clients experiencing domestic or sexual violence through emergency shelters, transitional housing and outreach counselling in 2018-19.

“Why we’re looking to build a bigger shelter is because the need is there,” she said, adding that 60 clients were turned away due to capacity reasons, a 22 per cent increase from last year.

“Our increase in numbers are consistent with trends across the valley and across the province. In 2018, according to the Canmore RCMP, domestic violence cases increased by 51 per cent as compared to 2017,” said Snow.

“In the past five years the town has seen a 247 per cent increase in DV cases. The Alberta Council of Women’s Shelters’ 2018 data release confirmed that more women, children and seniors are accessing shelter than ever before, more than 10,000 across the province.”

For the two mayors, the YWCA is an integral service in the Bow Valley, one that they are happy to support, according to Sorensen.

“The YWCA provides so many services to our community, so I am always happy to step up and do whatever I can to assist [them] in any of their efforts,” she said.

“This issue particularly is, I think, something that everybody is concerned with in terms of violence and abuse against women and obviously it is as important in our community as it is anywhere else and we want to make sure that we have the support in place to help people in need, in crisis, in these situation.”

The two mayors have discussed expanding this team initiative to ID9 and the Lake Louise area, and the MD of Bighorn, creating one big Bow Valley team walking for violence prevention awareness in future Walk-a-Mile In Her Shoes events.

“It’s a great idea to expand the opportunity to our municipal colleagues throughout the valley,” said Borrowman.

The Walk A Mile in Her Shoes event takes place this Friday (Sept. 13) at noon in Canmore, with the two communities alternating hosting duties. Snow said anyone is still able to sign up all the way until the walk itself begins.

“We believe that everybody needs to be part of the solution when it comes to eliminating violence in our communities,” said Snow.

“Inviting men into the conversation we think is really important, so that they feel empowered to not just do better themselves, but to speak up when they see someone make an offhand comment or cat-calling on the street, that sort of thing.”

For more information on Walk A Mile in her Shoes, visit www.walkamileinhershoes.orgor www.ywcabanff.ca.

If you or someone you know in the Bow Valley is involved in a violent situation or struggling with sexual assault or violence, the YWCA, located in Banff, is available for confidential support at 403-760-3200. Alternatively, you can email them at yps@ywcabanff.ca.