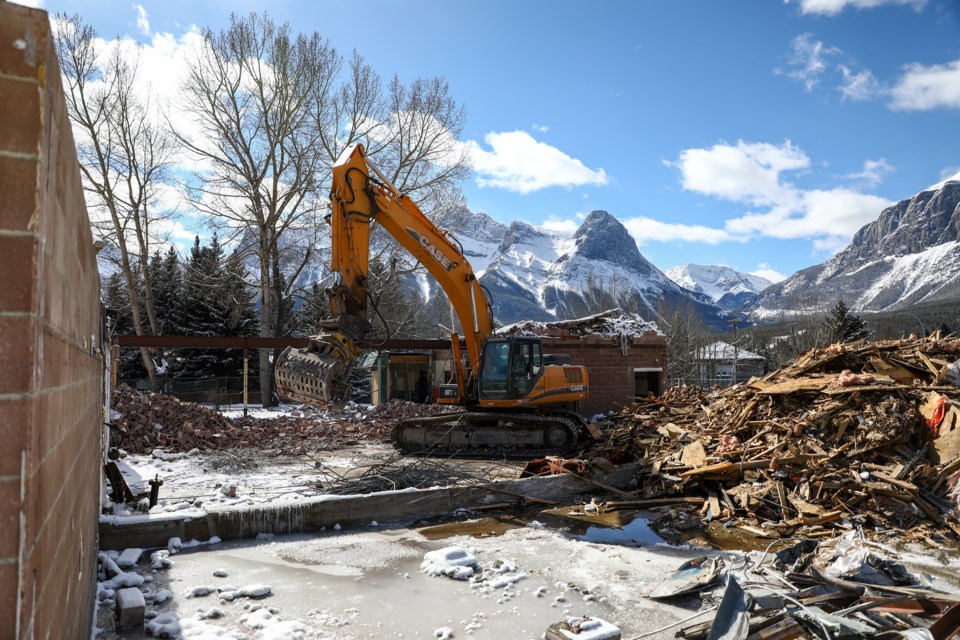 A demolition crew tears down an old hotel on Mountain Avenue in Canmore on Tuesday (March 23). EVAN BUHLER RMO PHOTO

CANMORE – The Banff Lodging Company has acquired another Canmore property for future development.

Formerly known as the Canmore Lodge, which was also home to Legends Pub, the building at 200 17 St. has remained inoperable for many years and is not being considered for restoration.

“The structure is not in great shape or salvageable; it’s a liability,” said Shawn Birch, vice president of finance and projects with Banff Lodging Co.

The Town of Canmore confirmed a demolition permit was issued Jan. 20. The Town’s planning department does not currently have any building or development permits for this property.

There are no official plans for the property at this time, according to Birch.

“Nothing is defined yet for the property,” he said. “It’s going to be vacant for the time being.”

The original structure was constructed circa 1976 according to building plans obtained by Banff Lodging Co in 2019 when the property was purchased.

The building has functioned as a hotel, bar, billiard club, and a liquor store in the past.

At the time, Caribou Properties president and CEO Gord Lozeman said that expanding into Canmore was a "logical extension."

“Our intention is to operate the property, as is for the time being and then eventually figure out the master redevelopment plan," he said at the time.

Part of the motivation to expand into Canmore is that Banff was approaching its build-out capacity and the company felt "bullish" about tourism in the mountain town east of the national park's borders.

The company also owns the Pocaterra Inn on Bow Valley Trail in Canmore, as well as 12 hotels, several restaurants, several spas, retail stores and a movie theatre in Banff.

It also owns divisions in construction/real estate development, commercial leasing and residential property management, including 500 residential beds in the town of Banff.

About the Author: Gabe Lunn

Gabe Lunn is a Banff native and reporter based in the Bow Valley. His interests have led him to produce coverage on local politics, environmental issues, arts and culture, among other topics.
Read more