The hotel developer has proposed to build on only half of the lot located at 1730 Bow Valley Trail with a lower than the minimum required floor area ratio and administration for the municipality has asked for more time to consider the implications for future off-site levies
0
Sep 9, 2019 9:00 AM By: Alana MacLeod

A rendering of what the Best Western would look like.

CANMORE – The Canmore Planning Commission has postponed a decision to approve an application from Best Western to develop a hotel on Bow Valley Trail after administration brought up concerns surrounding a variance requested to the floor area ratio.

The hotel developer plans to build on only half of the plot located at 1730 Bow Valley Trail with a lower than the minimum required floor area ratio, causing administration to grow concerned about possibly losing out on future off-site levies.

“The comprehensive planning of the entire parcel of land has not been considered in this application, as the developer has conceptual plans to add a second hotel building on the remaining portion of land that were not part of the application being considered by the CPC,” wrote Robyn Dinnadge, Town of Canmore’s communications manager, in an email.

“Administration needs additional information regarding whether the Town of Canmore could possibly lose out on future off-site levies that would fund infrastructure required to support the development (fire hall, recreation, and utilities), as the Town may only be able to collect off-site levies once.”

“Floor area ratio means the numerical value of the gross floor area of the building(s) located upon a lot divided by the lot area (parking structures or portions of buildings used for parking are not included in the calculation of gross floor area). Minimum and maximum floor area ratios exist to encourage appropriate-sized developments in relation to the size of the parcel,” explained Dinnadge. 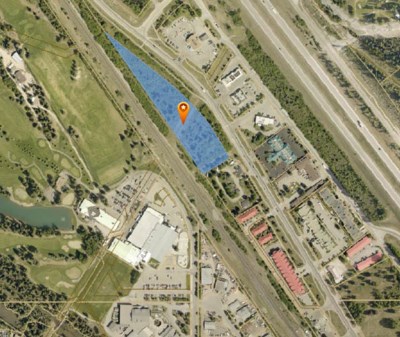 “When looking at the site, it is a large site. It is sort of an odd configuration of a site, it’s not your standard rectangle or square. It is sort of this tapered triangular almost like a pointed site,” said Marcus Henry, supervisor of planning and development.

“It’s only going to be developing the eastern side of the site, but with that side, there are a fair bit of constraints…. The first are two water line right of ways where we can’t have any plantings, any buildings. Same for the Fortis transmission line, which are overhead lines, which are proposed to be buried, they currently have a temporary agreement with Fortis if its approved to have them bury the lines.”

Alongside those constraints, the CP Rail line lies behind the plot.

The hotel itself would be on the eastern side of the site with 31 one-bed units, 56 two-bed units, 14 two-bedroom plus den units and two one-bed plus den units. As well, a parking lot would be placed behind the structure.

“If only half of the site is being developed, it may affect the Town’s ability to collect future levies, so Administration would like the opportunity to reconsider its support for the variance for the floor area ratio. Once the implications of the variance have been fully investigated, the application would return to CPC for a decision,” Dinnadge said.

The application is set to return to Canmore Planning Commission during the Sept. 25 meeting for a decision. For more information, visit www.canmore.ca.