“The traffic signals appeared to be in working order, the pedestrian had the walk signal and the vehicle was proceeding on a green light."
Dec 6, 2019 12:30 PM By: Jenna Dulewich 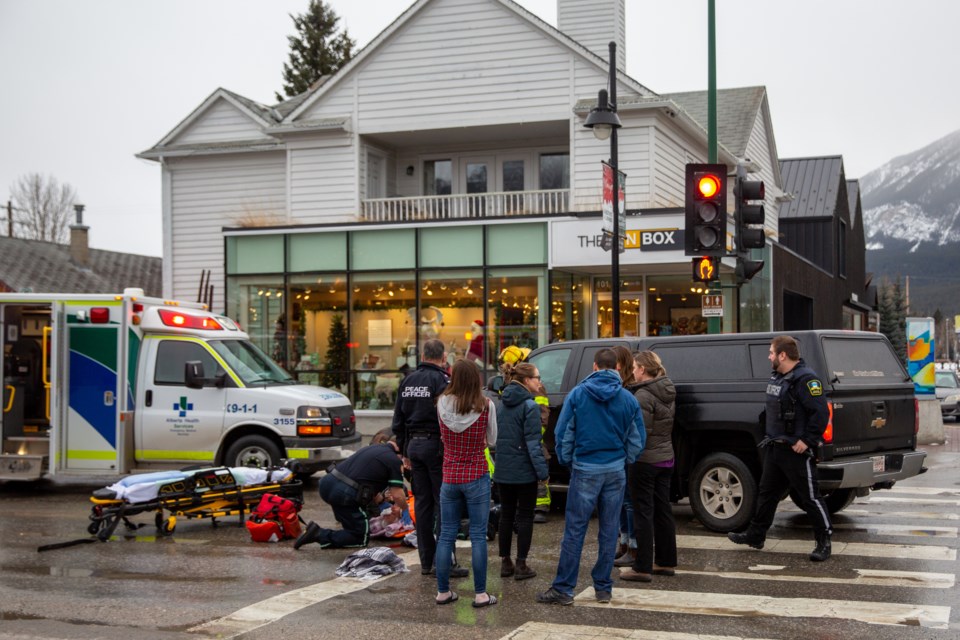 EMS and first responders attend to the scene of a pedestrian that was hit while using the crosswalk at Main Street and Sixth Avenue on Wednesday (Dec. 4). EVAN BUHLER RMO PHOTO⁠

CANMORE – The local RCMP is urging drivers and pedestrians to be careful and aware of their surroundings after a Calgary man suffered serious injuries as a result of being struck by a vehicle while in a crosswalk in Canmore earlier this week.

On Wednesday (Dec. 4) at approximately 11:10 a.m., Canmore RCMP, Fire and EMS responded to the incident where an 80-year-old male from Calgary was lying in the crosswalk after being struck by a truck in the Intersection at Sixth Avenue and Main Street.

According to the RCMP press release, the vehicle was facing south on Sixth Avenue and struck the man after turning left (east) onto Main Street.

“The traffic signals appeared to be in working order, the pedestrian had the walk signal and the vehicle was proceeding on a green light,” Canmore RCMP Sgt. Stan Andronyk wrote in an emailed statement.

The 80-year-old was transported to the Canmore hospital and suffered serious injuries as a result of the incident, RCMP said.

“Canmore RCMP would like to encourage all users of the road to take care and be aware of their surroundings. Vehicle drivers must stop for pedestrians in crosswalks and pedestrians should never assume that vehicles are going to stop for them,” Andronyk wrote.

“Always try to make eye contact with the vehicle drivers when crossing the road to confirm they see you. This message is not putting any blame on the pedestrians who suffered injuries in these collisions, we just need to prevent any further incidents.”

The driver, a 39-year-old male from Canmore, is facing charges under the Traffic Safety Act, of failing to yield for a pedestrian in a crosswalk.

The Canmore Sergeant said this is the second incident in a week where a pedestrian has been seriously injured after being hit by a vehicle while crossing the road in a marked crosswalk.

RCMP said on Nov. 21, a 53-year-old female pedestrian was struck while crossing Bow Valley Trail at the intersection with William Street in Canmore. Officials said she was in a marked crosswalk at the time of the collision and ended up being transferred to Canmore Hospital with serious, non-life threatening injuries.

The November incident is still under investigation.

RCMP said it will be putting a priority on crosswalk and intersection safety, as a result of the collisions.

“We don’t want anyone getting hurt on our streets,” Andronyk said.