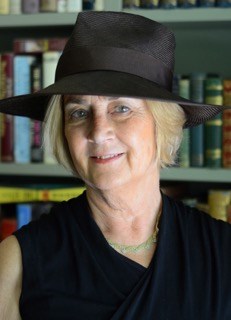 CANMORE – A Canmore resident, author and philanthropist is one of 120 new appointments to the Order of Canada.

Katherine Govier, who splits her time between Toronto and Canmore, has gained national acclaim for her work as an author and her commitment to helping foster immigrant women's voices through the Shoe Project.

Govier was sitting in her home office in Toronto working on a new novel when she received an email asking her to call the office of the Governor General to receive important information.

She reached out and soon discovered she was being named a member of the order.

"I was quite taken aback. I was not expecting it, not one bit. I was tearful. I was really moved," Govier said.

“I’m lucky, I love my work, I love to write and I love the Shoe Project. I don’t expect to be recognized. I suppose it’s true for anyone when you receive something like that – it seems to just fill you with gratitude.”

Govier was welcomed to the order for her contributions to “Canada’s literacy scene as an acclaimed author, and for supporting refugee and immigrant women,” according to the Governor General's investiture announcement.

She was one of 77 members appointed to the order, along with five companions and 38 officers.

Govier has seen the list come out of over the years and knew some writers had been included in the order, but it was a shock to discover she would be receiving the honour.

“I hope that my books last and I hope that… there’s a place for them in the lore of this country that people are able to see themselves in the books and understand who we are,” Govier said. “The Shoe Project is a different thing because it’s so immediate I can enjoy every minute of it. I can see the change in the women who join us. It’s just gratifying on an almost daily basis.”

The Shoe Project is a writing workshop primarily geared toward newcomers to Canada. Participants are often immigrants, in some cases refugees, who speak English as an additional language and have stories to share from their lived experiences.

“Fundamentally it’s like other writing workshops, it's just that these people need some technical work on their English and some expanding of their expressive skills,” Govier said.

“People are asked to tell stories of what brought them to Canada, how they’ve adapted to Canada and what they’ve left behind.”

Canmore was the very second place to launch a Shoe Project, Govier said, largely because it was her “other home.”

To date, the town has hosted three Shoe Projects and another one is planned for 2020.

The Shoe Project empowers women, Govier said and offers learning experiences for everyone involved be it, participants or mentors.

“At its heart, it does respond to the individual’s desire to write their story – it shows the power of expression.”

It has been a powerful project to be a part of, Govier said, because many of the women come from backgrounds and countries where they are unable, or not allowed to use their voices.

“We have freedom of speech here [in Canada]. We have many freedoms here and to watch people grapple with that as a new thing is to appreciate once again how lucky we are to live in this country,” Govier said. “I hope it [The Shoe Project] will be a legacy – It must be and will be continued on by the women themselves.”

“It’s like building a castle – there is enough energy in this whole experience for people to keep it going if we get all the parts in place. That’s amazing to me. I feel very grateful to everyone, it’s not just me,” Govier said.

“To make a really corny joke – The Shoe Project really does have legs. There’s something in the power of all these women all over the world having some shared experiences, but many, many differences coming together and building each other's confidence.”

Govier's continued work to empower women expands into her career as an author.

The new novel she is working on goes back to Japan to explore the life of a female artist, working as a "ghost brush" painting under her father’s name.

“She doesn’t get any recognition," she said. "In this novel, she’s coming back from the grave, she’s a ghost.

“She’s going to try and find out what happened to her art and get her name on her art.”

She travelled to Japan to research the novel and create a blend of fact and fiction, like most of her novels have been.

Recognition has been a theme that has spanned her work. Govier said it is a feminist issue in many ways because it is a basic human need that people are acknowledged and respected for the work that they do.

“For far too long the silent ones, the ones whose names are erased have been unknown to us – I like to make those people known and their stories are known and their ideas are known,” Govier said. “History can be double what we think it is if we open these doors to these other experiences.”