“Instead of getting that mad rush of people getting to class, they’re coming in, slowing down a little bit, having a bite to eat, mingling with different groups than they normally would so that’s kind of nice to see… You plan for one thing and then you get all these beautiful ripple effects that impact school culture.”
0
Oct 21, 2019 8:00 AM By: Alana MacLeod 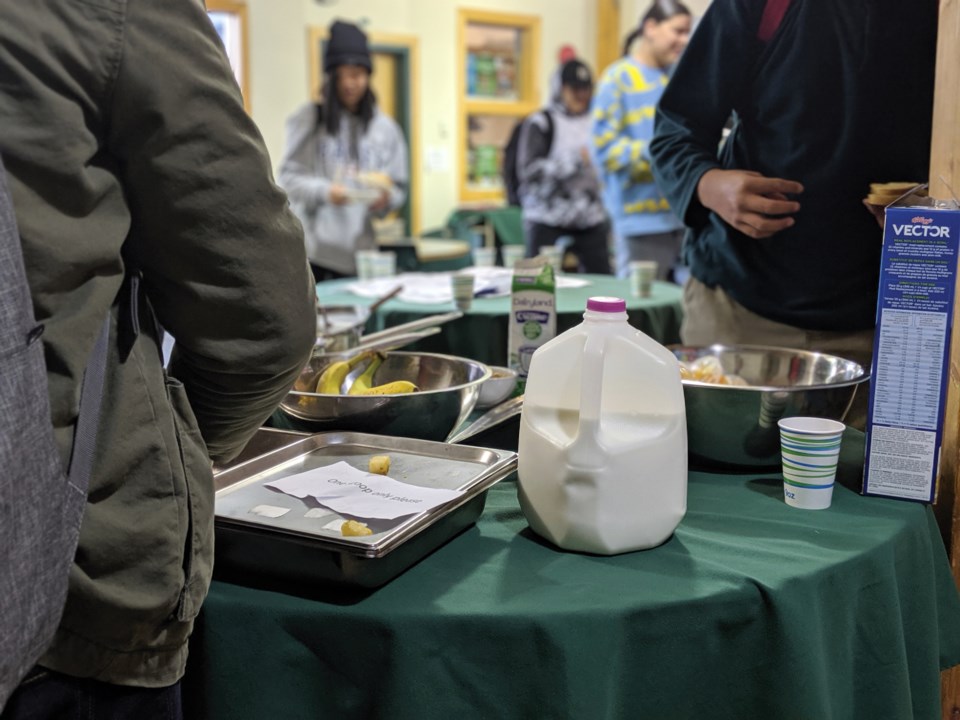 CANMORE – A local high school is providing its students with more than just mathematics and gym class – it’s also feeding them breakfast.

Canmore Collegiate High School has expanded its breakfast program to three times a week, ensuring its students have the brain food they need to get through the day.

“This is our fourth year and the first year started just with a Monday,” said CCHS principal Chris Rogers.

“We expanded it to a Friday, so a Monday [and] Friday – feeding them when they come back from the weekend and feeding them before they go. Then last year we started doing Wednesdays, and the Wednesday fare is starting to build up too, but it’s not as full on as you see [Monday and Wednesdays] … It ebbs and flows, but usually there are about 90 kids who come for breakfast.”

Rogers said on Mondays and Fridays, it is a full on breakfast, typically with hot food, bagels, cereal, oatmeal, etc., while Wednesday is typically more grab and go.

“Students come and help, we have a core staff team that are here every day – we do it Monday, Wednesday, Friday,” he said. “The big breakfast on Mondays and Fridays, the Wednesday breakfast is a bit smaller – we just don’t have the resources and funds to do the full week.”

One of the core staff members helping out with the breakfast program is the foods teacher, Deb Sellers.

“My classes are quite heavily involved in getting the food ready and then I get a few extra kids who have been in my classes who come and help in the mornings,” she said.

“[It’s all] volunteer, they get volunteer [credit] for it. Every three times, they get a free lunch, as well.”

For the student volunteers, it’s a way to still be involved in making food when their current course load doesn’t allow for it.

“I like it, I like hanging out with the teachers in a formal setting, I like being involved with the foods program without being in foods class still,” said Sophie MacLeod.

“I think it’s really successful in the means of feeding people.”

Rogers said initially the program was started when some students seemed less attentive in the morning. After some discussion with teachers and thoughts on the subject, he realized some take buses from out of town and either haven’t had breakfast at all, or it’s already been quite a while since they ate. The program was meant to ensure students are fed and full of energy at the beginning of the day, but has since blossomed into so much more.

“As we started running the program we realized all our kids across the spectrum come here – not just Morley students, not just international students, not just students who live in Canmore or Banff or from Kananaskis – all our students come up here,” he said.

“Instead of getting that mad rush of people getting to class, they’re coming in, slowing down a little bit, having a bite to eat, mingling with different groups than they normally would so that’s kind of nice to see … You plan for one thing and then you get all these beautiful ripple effects that impact school culture.”

Rogers told the Outlook the program itself wouldn’t be possible without the community – with funds and food donations coming from various places.

“The bagels come from Bagel Co. They give us a sponsor and they give us some bagels … we get some stuff from the food rescue,” said Rogers.

“We have funds from various places. The BCCF [Banff Canmore Community Foundation] sponsors us with a grant, we have some money from Rotary, the local Canmore Rotary, and we have some from the Bow Valley Spirit of Christmas. Our community’s great, very supportive.”

As the buses trickled in, so did the students and soon they could be seen grabbing bagels, or hot hash browns, or pouring glasses of orange juice – all the while chatting animatedly together.

“I love this part – seeing all the kids come up together because it brings kids from a variety of grades, all different types of kids come up here at the beginning of the day, so it’s nice to see them come up to have breakfast together – the kids love it,” said Sellers.