“People with money don’t want the people without money in the town, but they don’t realize they can’t survive without them.”
0
Feb 27, 2020 3:00 PM By: Alana MacLeod 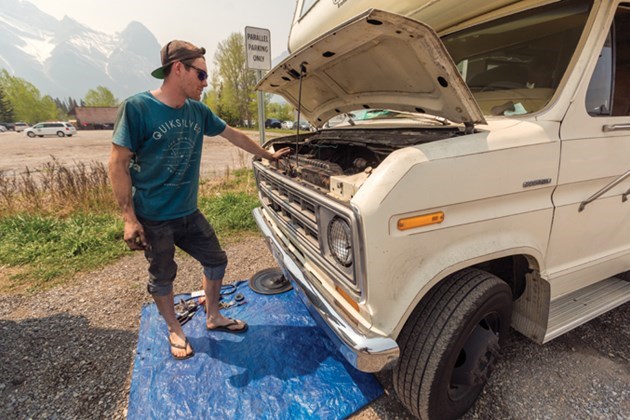 CANMORE – As the Town of Canmore works to roll out its new Safe Park program in May, some community members feel the proposed solution isn't logical.

The Safe Park program, which was approved by council earlier this month, will see scattered parking spaces offered for $10 between 8 p.m. and 9 a.m. from May to October – something some community members say doesn’t make much sense.

“What are we paying for? I don’t have electricity, or water, or even a place to set up," said Sylvain Charest.

"At least at a campground I have a table and some space. Now they want me to pay, renew twice a month – so much trouble for nothing much.”

Charest lives in his vehicle year-round, works between 40 to 60 hours a week, and said he would happily pay for a place to park.

However, he takes issue with the current solution the Town of Canmore has proposed, saying a simple parking space for only 13 hours isn’t a great solution.

“Let's put it this way; if you work in hotels, you’re going to spend $10-15 a night, sometimes lower than that to have staff accommodation,” said Charest.

“You’ve got a place where it’s warm, access to a shower, so you’re paying but you get something in return – that I don’t mind… but paying for a parking spot, but I’m not able to be there for the entire day? Half a day I have to move out – where am I going after 9 a.m.?”

The Safe Park program, which was officially approved during the Feb. 4 council meeting, will see 50 parking stalls dispersed across privately owned and municipally owned lots, with each to offer five stalls for vehicle dwellers. These stalls would return to regular parking use between 9 a.m. and 8 p.m. to accommodate the Town of Canmore’s paid parking program, which will operate from 10 a.m. to 5 p.m., and would be regularly monitored by security. Any issues would then be enforced by bylaw, or if necessary, RCMP.

The program is in response to numerous complaints received last summer concerning, what became known as Vanmore, setting up behind Save On, Elevation Place, and other businesses in town.
While vehicle living is not new in the valley, what was considered a large influx began to cause concerns within the community.

The complaints ranged from vehicle conditions to wildlife attractants and environmental impacts. In May 2019, the Town of Canmore first discussed the issue publicly. In the agenda package for that council meeting, “Working Group Considerations” were included, which outlines some of the complaints and concerns received.

“Vehicle management: Concerns that some vehicles are not properly maintained or are being maintained on site, which may result in an environmental impact. In addition, some vehicles have potentially unsafe stoves, putting the occupant, adjacent campers, and surrounding property at risk. There are also reports of unregistered or uninsured vehicles that may not only result in fines for the occupant (furthering affordability challenges), but may also leave the occupant unprotected in the event of an accident,” reads one segment.

Another complaint listed in the package is that of “perceived crime.”

“Concerns that since the area attracts non-permanent residents, it might also attract individuals who engage in criminal activity. There is an additional concern that many of the vehicles are left unattended with personal possessions inside, leaving them vulnerable to theft,” it said.

Other concerns listed are traffic and road use, affordability, a growing population – which refers to ‘van life’ in Canmore being highlighted online in climbing blogs and free camping websites – and liability.

However, Charest said living in his van is a lifestyle choice, and he believes some of the concerns are simply assumptions. He said the issue really does fall to affordability, and while staff accommodation is an option for some jobs in town, it isn’t always a practical one.

“[Staff accommodation] is great if you just spend a summer or winter – a season, then it's fine, you don’t mind that much sharing a room with two or three other guys in the same space, because it’s just one summer,” he said.

“But then if you want to build like a long-term relationship, build more of a life, then staff accommodation doesn’t make any sense, then you start looking for places to live like a normal adult. There’s nothing, and when there’s something – you know it right – it’s pretty expensive.”

The town, according to Charest, is built around seasonal workers.

“The town is built around those seasonal workers coming in and then they wonder why it’s so hard to keep people. Everything is built for that seasonal worker; nothing is done for people who want to stay here long-term,” he said.

“People living in a van, it’s a choice. I love my lifestyle.”

Some community members, such as Joshua Cremers, believe the Town is potentially inadvertently sending a message that Canmore is only for the rich.

“The power lies with the powers to be with money, they want Canmore to be a place of money and a place of class. It’s a lovely place, it’s beautiful, and it’s going to attract tourists,” said Cremers.

Cremers works in Canmore, but lives in Cochrane. He explained that he watched rent go from $800 to $1500 and now roughly $2,500, prompting him to make the decision to move as he realized he likely couldn’t afford living here long-term.

“Cochrane's population has doubled – that’s [a lot to do with] people from Canmore leaving,” he said.

“People with money don’t want the people without money in the town, but they don’t realize they can’t survive without them.”

However, other community members, such as Ed Russell, a former Town councillor said he agrees with Councillor Vi Sandford's sentiment earlier last year; if you can’t afford to live here, then maybe you shouldn’t.

“She’s right. It was met with absolute hostility… But this is it, Canmore’s a giant mushroom, sooner or later it’s going to collapse. We’re deluding ourselves,” he said.

Furthermore, Russell said he believes the Safe Park program isn’t a good solution. The overregulation and extra costs it will incur, he said, are among reasons the program will fail.

“[The Town is] trying their best, they have no idea, like nobody has any idea. This homelessness problem is exploding, but it brings a lot of social ills with it,” he said.

“They mean well, but the realities are, for whatever reason, these people aren’t fitting into the system. Do we mould the system?”

During the Feb. 9 council meeting in which the Safe Park program was approved, councillors and administration agreed that the program's function would be reassessed at the end of the season. At that time, the Town would make decisions based on research gathered to either consider other options, or continue the program as is.

Visit canmore.ca/safepark for more details on the new program.

Canmore learns those living in vehicles willing to pay to park overnight
Sep 27, 2019 8:00 AM