"I do want to remind everyone that this area and these little pathways through the centre of our community are really special for people," said Councillor Joanna McCallum, who voted against the motion. "You can walk through these magical areas of Canmore that still exist. It was clear from the letters we received that people really value those areas and find them special."
Nov 21, 2020 9:00 AM By: Tanya Foubert 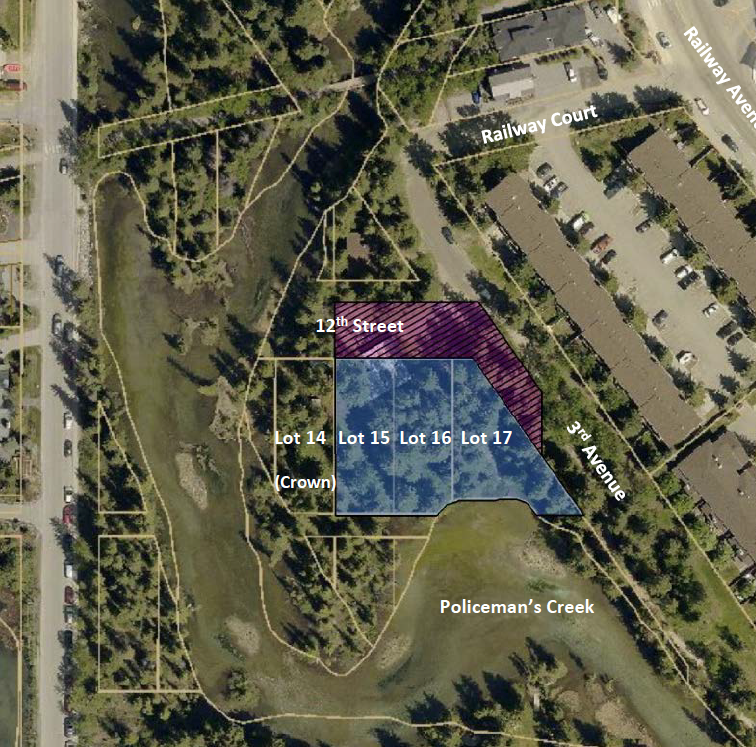 The three parcels of privately owned land, one parcel of provincially owned land and the unused roadway along Railway Court in Canmore. TOC PHOTO

CANMORE – Canmore council has voted in favour of accepting an offer to purchase an unused road allowance adjacent to a popular trail and Policeman's Creek, despite concerns from the community it would negatively affect a nearby popular trail.

Council voted at the beginning of November to close the unused road allowance behind Fairholme Estates on Railway Court, which allows the municipality to sell it to an adjacent landowner in order to subdivide and redevelop three lots.

"The proposal is to close this area of road, which would then be consolidated and the new lots would be formed ... these lots would allow for redevelopment," said development planner Tracy Woitenko. "Even without the road closure, the area can be developed ... a single detached dwelling can be located on each lot."

The road closure, however, would allow for more developable area. The sale agreement also provides $900,000 to the municipality as revenue, includes an increased setback from the creek – 20 metres instead of 15 metres – and included upgrades to municipal services.

The area to be sold is 758 square metres and is located next to a popular trail that runs through downtown Canmore next to the creek. The offer to purchase agreement was executed in February, but required a road closure bylaw and public hearing before it could be completed.

Mayor John Borrowman expressed concerns about the proposal, but ended up speaking in favour of the road closure. He said there were significant benefits to the municipality from the sale of the land, including the improved setback for the nearby riparian zone.

"I have been on the fence about this ever since it was first presented to council," said the mayor. "I am not that thrilled by the encroachment that would result into the existing green space and the trail that exists there ... for that reason I was hesitant to be in support of this.

"But at this time, I am prepared to support second reading and there are a number of reasons ... first and foremost we have to recognize that without this bylaw being approved, the landowner has the right and ability to develop three lots and ultimately three buildings in this same area.

"By approving the road closure, we are improving the impact on the environment by ensuring any new buildings would have to be a further five metres from Policeman's Creek, which I would say is a significant improvement."

Councillors Jeff Hilstad and Vi Sandford agreed with the mayor's assessment on the financial and environmental benefit to the municipality.

The motion to approve, however, was not unanimous, as Coun. Joanna McCallum spoke against it. She said it was unfortunate that a detailed design concept for the area was not required until subdivision, as it could have provided the community with better information on how the redevelopment would affect the nearby pathway and adjacent homes.

McCallum said that without the expanded area to build, the resulting redevlopment of the three lots would be smaller and have less of an impact on the adjacent neighbours and trail.

"I do want to remind everyone that this area and these little pathways through the centre of our community are really special for people," she said. "You can walk through these magical areas of Canmore that still exist. It was clear from the letters we received that people really value those areas and find them special."